If Vin Diesel's not the key, then what makes a franchise work?

In a perfect world, Hollywood would examine is whether a movie contains the elements necessary to make it a franchise rather than just a tired series of retreads. Genre films like sci-fi flicks or comic book adaptations tend to work better as a franchise; They’re built around characters, usually with some kind of fantastic abilities or environment that allows for more than one story. Most comedies and realistic dramas are built around a story, not a character. And while the audience can accept almost any ludicrous premise once, buying it two or three times, especially if it happens to the same person, is a bit too much of a stretch. It’s why “Star Trek

” can easily work through the Roman numerals while “Home Alone

Even a movie that straddles the line between reality and fantasy can strain to expand into a franchise. One of the things that makes the first “Die Hard

” movie work so well is that everything that happens in it is, while certainly incredible, believable. When, in “Die Hard 2

,” detective John McClane (Bruce Willis) wonders aloud, “How can the same $#@* happen to the same guy twice?” the self-acknowledgement only enforces the diminishing verisimilitude.

Sadly, even when franchises are led by strong characters, sequels are often reluctant to take them to new places, preferring to play it safe by only slightly altering the scenario of the first film. Certainly, Eddie Murphy’s “Beverly Hills Cop

” hero, Axel Foley could’ve carried a movie outside of Los Angeles, where the Motown-meets-money schtick quickly got tired in its two sequels

. Why couldn’t they have taken Axel to another city, maybe even another country and given us “Berwick-Upon-Tweed Cop?”

Inherently, it would seem comic book franchises could effortlessly pile up the sequels, as they’re based on series with hundreds or even thousands of different stories already in the vault, ripe for adaptation. And yet, bafflingly, filmmakers almost always feel the need to rationalize continuing a celluloid superhero’s saga. Witness Tim Burton and Michael Keaton’s defensive posturing during press junkets for the witless 1992 sequel, “Batman Returns

.” Both opined that they had no interest in doing a follow up to the 1989 phenomenon

unless they could come up with another story. Um... the fine folks at DC Comics

had been coming up with new stories for Batman every month for over fifty years at that point, But Hollywood is nothing if not myopic and self absorbed.

In a way, the “Batman

” movies set a new precedent for modern film franchises. When both director Burton and star Keaton walked away after the second film, Warner Bros. had so much invested in continuing the lucrative series that stopping it was never an option, even though so much publicity had centered around the “vision” of the creative team. But the subsequent hype that surrounded the hiring of new Batcave denizens ensured that “Batman Forever

” would make money regardless of who was at the helm. The juggernaut could continue for a while. “Batman” had become a popular brand name and the quality of the “product” was irrelevant. Even after Joel “more is less” Schumacher sunk the Batship with 1997’s dayglo disaster, “Batman and Robin

,” Warner knew they only had to wait a while for the taste to wash out of the public’s mouth, and so this June we’ve got a brand new Batman beginning 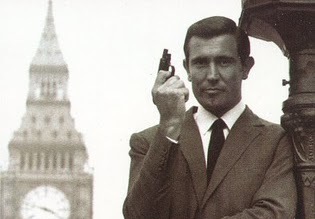 Granted, with a series like Batman, where (as many superhero actors have stated), the costume does most of the acting, it’s easier to accept a new face behind the mask than with a character like James Bond

or even Mr. Spock

. At the beginning of 1969’s “On Her Majesty’s Secret Service

,” new 007 George Lazenby says, “This never happened to the other fellow,” a direct fourth-wall-breaking reference to the departure of original Bond Sean Connery (the screenplay originally referenced plastic surgery as the explanation of Bond’s new face). When Leonard Nimoy announced he was leaving the “Star Trek” series after the second film

in 1982, Paramount scrambled to decide how to continue a franchise without its most popular character. In that case, the common wisdom decided they couldn’t, and, despite Mr. Spock’s death at the end of “The Wrath of Khan,” Nimoy was lured back into the pointy ears with the promise of more creative involvement. Oh, and money.
While certainly financially viable, horror as a franchise is usually a creative bust. Yes, your “Halloweens

” are built around knife-wielding characters, but they’re all one dimensional. They hack people up and that’s about it. As for the sacrificial lambs, can you name any memorable victims other than Jamie Lee Curtis from any of those films? Can you even name her character? (It’s Laurie Strode.) And only the most hardcore slasher film fanatic can encapsulate the variations in plot from any of those series.

Contrast those films with the “Alien

” series. What’s the more important element, the various incarnations of the alien... or Ellen Ripley? While the monster, the tone and even the structure of each Alien movie changed, the one element that remained was Sigourney Weaver’s ever-darker portrayal of the creatures’ arch enemy: from frightened heroine in Ridley Scott’s 1979 original

” and finally the cold, resurrected clone in the utterly lamentable “Alien: Resurrection

.” Despite wildly different visions of the directors of the franchise, Ripley remained the lynchpin in the series.