BATMAN BEGINS forces a re-examination of Burton's BATMAN... and it ain't pretty.

” is NOT, (as some who apparently missed the “Begins” part of the title believe) the fifth film in Warner Bros.’ Batman franchise

. It’s a fresh start for DC Comics’ 66 year old crime fighter, and this time, finally, they got it right.

In 1989, comic book fans were wetting their underoos in anticipation of Tim Burton’s “Batman

,” a promised gothic take on the character they like to call “the Dark Knight.” The movie, starring Michael Keaton as Batman and Jack Nicholson as the Joker was a record breaking phenomenon that was impossible to avoid that summer. It was also, in retrospect, and especially in comparison with “Batman Begins”.... a pretty crappy movie. 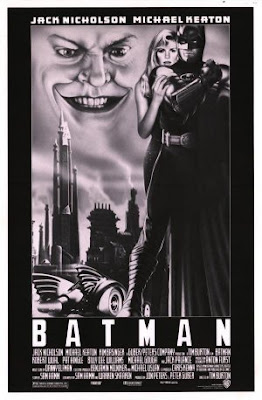 The critical response to “Batman” was mixed. But even most bad reviews (sometimes grudgingly) admitted that the movie had a distinctive look, a dark grittiness that was the polar opposite of the brightly colored “Batman” TV series of the 1960s. Some less demanding filmgoers (and most Batfans) allowed themselves to believe that the mood and look of the movie were enough to make it great.

In an interview with Comics Scene Magazine, director Burton said, “I wasn’t a giant comic book fan, but I’ve always loved the images of the characters of Batman and the Joker.” Burton accomplished his goal: to have images onscreen. No coherent story, no clearly defined characters, no excitement. But there are images.

But are those images that great? Production Designer Anton Furst’s claustrophobic Gotham City seemingly only takes up five city blocks (every scene takes place at or near the Monarch Theater). The heightened theatricality of the few sets (combined with sparsely populated crowd scenes) never really creates the feel of an actual urban environment (unlike the sprawling Gotham of “Batman Begins”). The batmobile looks more like it belongs on the shelf of an adult toy store than Toys-R-Us. As for Batman himself, his rubber body armor is so bulky that the caped crusader can barely move; He runs like he’s toting sacks of cement and the cowl even falls askew on his face when he drops into the art museum.

As for the cast, Michael Keaton’s angular, brooding eyebrows are his only physically imposing characteristic. Burton’s rationalization for casting the slight actor was that a square jawed, 6’2” muscleman would lack the psychological need to become Batman. But Bruce Wayne’s drive is to avenge his parents’ murder, not to compensate for a receding hairline. Batman relies on far more than just the goodies on his utility belt. As “Batman Begins” shows us, Bruce spends many years honing his body and mind as his primary tools in his battle against evil. Not that Keaton was bad, but in the end, he’s an unconvincing Batman. 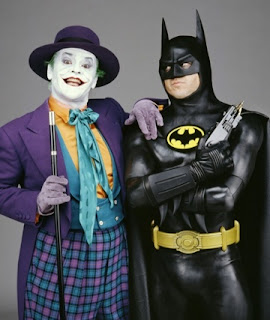 But not as unconvincing as his enemy. While everybody raved that the Joker steals the show in “Batman,” isn’t that a bad thing? Jack Nicholson is so iconic that you never once forget it’s him buried under the white makeup and facial prosthetics. His laid back, smart-aleck charisma is all wrong for the tightly wound, maniacal clown prince of crime; The Joker shouldn’t be LIKEABLE. And what’s his motivation? Wounded vanity? Isn’t that as lame as Lex Luthor hating Superman for causing his baldness (an origin that DC Comics smartly ditched decades ago)? Also, by giving him a name (Jack Napier) and a backstory, tying him into the death of Bruce’s parents, the movie eliminated the sense of mystery and that’s made the Joker Batman’s most formidable villain for over six decades.

In “Batman” and its sequels, Pat Hingle’s buffoonish Commissioner Gordon serves as little more than an expository figure, someone to switch on the Bat Signal and explain who the villain is. In “Batman Begins,” we see the development of the symbiotic, if uneasy relationship between the vigilante and the only cop he can trust (played with a pleasant earnestness by Gary Oldman). It’s the first time a movie has shown us this key element of the comic book.

And what’s up with Vicki (or is it Vicky?) Vale (Kim Basinger)? Does she wear a wedding dress to Bruce Wayne’s benefit to let it be known she’s looking for a husband? Is that why she’s so quick to sleep wtih Bruce on the first date and then immediately start asking “what does this mean?” She just doesn’t come across as a tough, jet setting photojournalist. She’s even got teddy bears on her bed.

So why does Bruce get involved with Vicki in the first place? As he’s just starting on his career as Batman, this distraction makes no sense. And then he decides to tell her he’s Batman? Why? Vicki’s not even staying in Gotham, she’s just there for the Batman story (and, boy, is he willing to give it to her!). And, by the way, just how did she finally find out Bruce is Batman? Did Alfred tell her? Where’s that scene?

Regardless of the psychological drama, “Batman” is still a superhero movie, so one would assume it would contain some action. But “Batman” may be the most leaden action film ever made. Burton thinks in still imagery, not motion. The movie, like all of his films, is filled with scenes that look like the actors are posing for a photograph rather than moving through life. Most of the time, Batman just stands still, waiting for bad guys to attack him so they can be felled with one kick, an extending Bat-Glove-Spatula, or maybe just luckily fall through some rotted wood. Batman plods through the film with no grace at all. 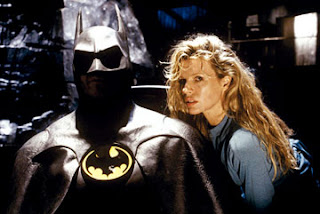 The climactic battle atop Gotham Cathedral (after the Joker shoots down the Batwing with a PISTOL) is endemic of everything that’s wrong with “Batman.” To start, why does Batman climb the steps to follow the Joker and Vicki? Why not scale the exterior of the cathedral to get there ahead of them? How did the Joker’s henchmen get up there? Does the Joker know what Batman means when he says, “You killed my parents?” After Bats and Vick are pulled over the edge, why do they just hang there when Batman has tools on his belt to save them? And, then comes the movie’s biggest blunder: the Joker dies. Quite unspectacularly, too. It’s a finale with no drama. You can tell that they were making it up as they went along.

Maybe the movie could’ve been partially salvaged if it ended differently. Maybe Batman could’ve held the Joker over the edge of the cathedral and said (in contrast with the opening scene with the mugger), “I’m GOING to kill you.” Then Batman drops the Joker, only to use his batarang and grappling wire to save him, reinforcing the difference between a villain and a hero. Cut to a straightjacketed Joker in Arkham Asylum, alive and waiting for a sequel.

But that’s maybe the biggest problem with Burton’s “Batman.” In a fundamental shift from the essence of the character in the comics, this Batman kills. While Batman did carry a pistol in his earliest comic book appearances, it’s since been established that not only does he never use a gun (let alone mount machine guns on his vehicles), Batman does not kill. It’s what separates him from the bad guys. And it’s the biggest example of how the people who made “Batman” had no respect for the character.

So why is “Batman” so beloved by the fans? Because it got the hard stuff right. Because it did look like it was supposed to. Maybe on a subconscious level, comic book fans appreciated the static nature of the film because it reminded them of the printed page. “Batman” was the ultimate example of the triumph of style over substance.

Of course, things didn’t get any better after “Batman.” “Batman Returns” suffered from the same stilted action, leaden dialogue, convoluted plot and muddled characterizations (Batman kills again). And then came the campy Joel Schumacher debacles, “Batman Forever” with its day-glo homoerotic undertones and the truly execrable “Batman and Robin,” a movie that makes “Catwoman” appealing in comparison. Thankfully, Batfans had Bruce Timm’s superb animated series of the ‘90s to soften the blows of bad movies.

There will no doubt be critics who feel that “Batman Begins” takes the character too seriously and is overloaded with exposition. Alfred Hitchcock’s “MacGuffin” theory states that plot devices that advance the story don’t need to be explained. If the characters accept the existence of a superhero and his gadgets, so should the audience.

And he’s right. You don’t REALLY need to know where Batman gets “those wonderful toys.” With superhero movies that are more fantastical, it’s easier to accept the unexplained appearance of gizmos and futuristic outfits (ala Spider-Man’s costume). But one of the key elements of Batman is that he actually COULD exist. Shown in as realistic a context as possible, the explanation of how, when, where and why he came to be makes for a compelling story. “Batman Begins” features clearly defined characters in an exciting film that makes sense. At long last, the sound of bad Prince songs

can stop ringing in our ears and we can wash the bat-taste of bad bat-films out of our mouths.