What's a movie gotta do to shock you people these days?

,” dozens of stand up comedians perform and discuss the history and comedic import of a legendary filthy joke. The structure of the joke is thus: Guy walks into a talent agent’s office and pitches a family act that performs unspeakable acts involving sex, violence and bodily functions. The agent, stunned, asks what this act could possibly be called, to which the pitcher exclaims (pause for timing)... “The Aristocrats!”

If that doesn’t sound funny to you, don’t feel bad. We didn’t tell it right. The joke is an improv classic, never told to an audience (except by Gilbert Gottfried at the Hugh Hefner Friar’s Club Roast in 2001, the impetus for this film), but performed backstage for generations. What makes the joke legendary is the stamp that each comic puts on the description of the act. The filthier, grosser, more offensive, the better. Of course, as times have changed, the boundaries of the joke have been pushed further and further. The movie presents quite a few repulsive variations, but, to be honest, in 2005, the most shocking thing about “The Aristocrats” is that the dirtiest version comes from “Full House

Movie audiences have become so jaded, so overstimulated, so desensitized to formerly taboo material that it takes a lot to shock the popcorn outta the box.

There was a time when films were overly concerned about offending the audience. In 1930, Hollywood adapted the Hays Code, a restrictive list of what not to do in regards to crime, obscenity, costume, dance, religion, national feelings, “repellant subjects” and of course, sex. Naturally, most of the rules fell into the “sex” category, which went so far as to even discourage “excessive and lustful kissing, lustful embraces, suggestive postures and gestures.” 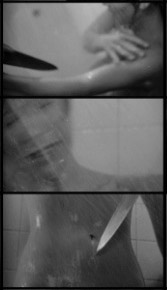 It sounds (and was) extreme, but in fact, early audiences were a bit delicate. It’s hard to believe that there was a genuine outcry when Rhett Butler (Clark Gable) uttered the phrase, “Frankly, my dear, I don’t give a damn” at the end of 1939’s “Gone With the Wind

As the decades progressed, the Hays Code became anachronistic and movies began to slowly but surely depict themes and images that were once thought too damaging to the public interest. Billy Wilder’s “Double Indemnity

” (1944) dealt with infidelity and sexual obsession. Otto Preminger’s “The Man with the Golden Arm

” (1960) placed the still divisive subject of evolution on the table. Audiences may have been startled, but they hadn’t seen anything yet.

Alfred Hitchcock pushed the envelope a bit further with his classic 1960 thriller, “Psycho

,” but not as much as audiences thought. Yes, the film is rife with Oedipus complexes, sexual perversion, lewd behavior and immorality. And while the shower scene is still frightening 45 years later, at the time, some people were outraged by what they THOUGHT they saw, but actually didn’t. Janet Leigh’s nudity was only implied and there was never a shot of Mother’s knife plunging into her “fine, soft flesh.” Still, some people felt that film had gotten as down and dirty as it could possibly go.

When the Hays Code was finally abandoned in 1967, it was replaced with the MPAA ratings system, which has proven to be just as ineffective at curtailing cinematic prurience. In fact, the movies helped to push sociological change, challenging standards and presenting difficult themes in that manipulative, powerful way that film does better than any other artform.

Audiences were shocked as much by the unrepentant nihilism as by the choreographed violence, blasphemy and sex in Stanely Kubrick’s “A Clockwork Orange

” (1971). Public reaction was so extreme that the movie was banned in England for years. In 1994, “Natural Born Killers

” came out like “A Clockwork Orange”’s American cousin. Adapting a story by Quentin Tarantino, director Oliver Stone made a hyper-violent commentary on American media that pulls no punches. Like “Orange,” the movie was construed by some as glorifying violence, a charge exacerbated by a real life murder “inspired” by the film. “Natural Born Killers” lacks the grace of “A Clockwork Orange,” but then again, that’s partially the point.

It seems as if religion may be the only perpetual taboo. Martin Scorsese’s “The Last Temptation of Christ

” (1988) caused a huge stir by presenting Jesus as a man capable of human yearnings. “Monty Python’s Life of Brian

” (1979) similarly raised the ire of the Christian community by (they felt) mocking the story of Christ (who was actually born a few mangers down from Brian). Jean-Luc Godard’s “Hail Mary

” (1985) posited a modern day immaculate conception, which was far too blasphemous for many of the flock. Amazingly, none of those films caused the downfall of Christianity, paving the way for Mel Gibson to make “The Passion of the Christ

,” a film that proves the equation Jesus Movie = Controversy, no matter what. 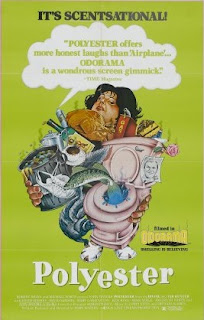 . From the late 1960s through the early ‘80s, the Baltimore filmmaker made a fistful of deliriously trashy comedies with his muse and star, the 300 pound drag queen named Divine. Waters’ films are joyous celebrations of bad taste, suburban kitsch, family dysfunction and freaks (all of which he loves dearly). 1972’s “Pink Flamingos

” tells of two families competing for the title of “filthiest people alive” utilizing such methods as sex with chickens, furniture licking and even honest-to-Divine ingestion of feces. 1981’s “Polyester

” told of the travails of Francine Fishpaw (Divine again), a put-upon housewife contending with a pregnant promiscuous daughter, an unfaithful pornographer husband and a son with a fetish for stomping on women’s feet. The movie was presented in “odorama,” wherein audience members were given a scratch and sniff card to use at various points in the movie. The odors included dirty socks, gasoline and a lovely fart. Waters went on to make more mainstream (but still askew) fare such as “Hairspray

,” but he’ll always be remembered as the man who brought genuine affection to the grotesque and the shocking.

The same can’t be said of Waters’ antithesis, Todd Solondz. While dealing with many of the same subjects, the 45 year old New Jersey filmmaker attacks suburban malaise with a petulant nihilism from a perch of smug superiority (or is it jealous alienation?). In the ironically titled “Happiness

” (1998), characters drown in their misery, from the narcissist who gets involved with the schlubby pervert next door to the brittle teacher who has an affair with an abusive immigrant taxi driver to the perfect Dad who turns out to be a pedophile. Solondz seems to love shoving human frailty and the lie of “normalcy” in our faces. But he offers neither insight nor sympathy in any of his films, including “Storytelling

.” His work is shocking, albeit mean and hollow, having the effect of a bully killing your pet and putting it on your doorstep.

Violence should be the most shocking thing to witness on film, but it almost never is. Vicariously, audiences enjoy watching horrific crimes that would emotionally scar a human in real life. A filmmaker has to go the extra mile to overcome decades of oversaturated violence in film and TV. That’s what Gaspar Noë did in 2002’s “Irreversible

,” perhaps the most disturbingly violent movie in recent memory. Working backwards chronologically, the movie shows the depths of depravity to which, theoretically, even a good man can descend. To hammer its point, the movie puts forth a rape scene and a murder that are so viscerally sickening that some fled the theater either for the bathroom or the exits. “Irreversible” is not a pleasant filmgoing experience (be wary of anyone who owns the DVD), but it is a litmus test of how desensitized the viewer has become.

Ultimately, ugliness, like beauty, is subjective. One man’s filth is another’s art, what you may find shocking is a walk in the park to others. Controversial films like David Lynch’s “Blue Velvet

” (1995) often use shocking content to impel the audience to think, to feel; exploitation is usually not the motive. By contrast, mainstream movies like “The Island

” present cartoon violence with triple digit death counts that carry no weight or consequence. People blowing up remains “cool,” even after we told ourselves that everything had changed post-9/11.