When one’s mind turns to movie monsters, we usually envision giant lizards, werewolves or flesh eating monkeys from West Mifflin PA. But we probably don’t think of... the bunny rabbit. But maybe we should. As Wallace and Gromit prepare to tackle the Curse of the Were-Rabbit, we take this opportunity to remind you of ten other movies featuring terrifying bunnies! No, seriously.

(1955)
In this classic Friz Freleng Warner Bros. cartoon, Bugs Bunny convinces a friendly carrot feeder to adopt him as a pet, unaware that he’s moving in with Dr. Jekyll. When he samples the good Dr.’s formula, Bugs becomes a rabbit Mr. Hyde, with green fur, red eyes and long claws. Okay, so he’s not exactly TERRIFYING, but we had to start somewhere! 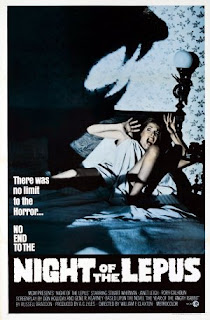 • Night of the Lepus

(1972)
We’re not kidding: This is an actual horror movie about a pack of murderous, giant mutant rabbits terrorizing the American southwest! Among the humans battling the bunnies are DeForest Kelley (“Star Trek”) and Janet Leigh (“Psycho”). No, really, this is a real movie (you can even see a clip of it in “The Matrix”). “Night of the Lepus” features lots of slow-motion scenes of 150 pound rabbits rampaging and... Look, no fooling, this flick DOES EXIST... it’s even coming out on DVD, adding weight to the theory that eventually EVERYTHING will be released to home video.

• Monty Python and the Holy Grail

(1975)
In the legendary British comedy troupe’s classic film, Tim the Enchanter leads King Arthur and the Knights of the Round Table to the Cave of Caerbannog, which is guarded by a creature so evil, so vicious, it’s death personified... with nasty, big, pointy teeth. That creature isn’t behind the rabbit... it IS the rabbit. The most foul, cruel, bad-tempered rodent you ever set eyes on. The knights are skeptical until the rabbit chews Bors’ head off, causing the not-quite-so-brave-as-Sir-Galahad Sir Robin to soil his armor. Again.

(1983)
In “It’s a Good Life,” the Joe Dante-directed segment of the adaptation of the legendary TV show, Kathleen Quinlan plays a stranded teacher who meets a boy named Anthony (Jeremy Licht) with incredible powers and a freaked out family. Able to warp reality and create anything with his mind, Anthony’s unchecked adolescent id delights in tormenting his terrified family by doing things like making his uncle perform a magic act. Only Anthony alters the old bunny-in-the-hat trick so that the rabbit looks more like H.R. Giger’s “Alien” than Peter Cottontail... and eats Uncle Walt.

(1983)
For years, Aunt Clara had labored under the delusion that Ralphie (Peter Billingsley) was not only perpetually four years old, but also a girl. And so, for Christmas, she sends the Red-Ryder-coveting lad a fuzzy, pink one-piece bunny suit (pajamas?) complete with floppy ears and two bunny heads for feet. Mom thinks it’s adorable, brother Randy can’t stop laughing, but the Old Man is horrified, describing Ralphie as both a “deranged Easter Bunny” and a “pink nightmare.”

(1987)
Adrian Lyne’s seminal parable about the perils of infidelity contains lots of “Oh No!” moments, but none hit home like the fate of innocent little Ellen’s pet bunny. The “Rabbit Stew” cooked up by jilted lover Glenn Close has become one of those iconic moments in movie history, right up there with the horse-head wake-up call from “The Godfather.” If “Fatal Attraction” curtailed cheating (at least briefly), it probably also hurt rabbit adoption as well. 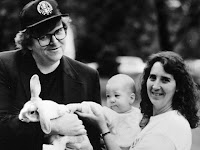 (1989)
Those of us who eat meat usually prefer not to think of how that burger got on our plate. Being at the top of the food chain means we humans sometimes do some pretty nasty things to sate our appetites. We accept it, we just don’t wanna see it. So, in Michael Moore’s documentary “Roger and Me,” when a poor Michigan woman bonks one of her “pets or meat” bunnies on the head with a lead pipe and then skins it for dinner, it’s pretty shocking. We’re just glad she wasn’t making her famous kitten casserole that night.

(2001)
In Richard Kelly’s cult classic (can a four year old movie be called a classic?), tormented teen Donnie (Jake Gyllenhaal) is plagued by visions of a giant, malevolent doomsaying rabbit named Frank (James Duval). This Lynchian nightmare is a hyper-metaphor for the alienation of those horrid high school years... or is it? One of the most endlessly debated movies of all time, there are dozens of theories as to the motives and manifestation of “Manipulated Dead Frank,” but one thing remains clear: that’s one freaky bunny.

(2001)
The same year that Frank tormented Donnie, another monstrous bunny-man haunted the dreams of retired gangster Gal (Ray Winstone) in Jonathan Glazer’s smart and stylish “Sexy Beast.” Riding a horse and toting a big gun, this snarling evil cowboy bunny is without question the most frightening of the mutant rabbits on this list (okay, except for Ralphie).

(2002)
In Martin Scorsese’s tale of lawlessness in mid-19th century New York , Liam Neeson plays (briefly) the leader of the Dead Rabbits, a gang of Irish toughs fighting in the Five Points section of lower Manhattan. “Dead Rabbits” is a (roughly) phonetic translation of “Really Tough Guy,” and to prove it, the gang members would spear a dead rabbit’s head on the end of a lance. Not quite as dandy as a gold-tipped walking stick, but it got the message across.

While the Dogs-vs-Cats debate eternally rages among animal lovers, fans of the rabbit remain a silent minority, sequestered in their hutches, their passion for the cottontailed ones building along with resentment of their second class status in the pet world. Perhaps it’s only a matter of time before the bunnies and their benefactors rise up and seek to supplant the Snoopys and Garfields of the world by any means necessary!! ....It’s a scary thought, no?