It's a long way from May to December

In Hollywood, both off-screen and on, the May-December romance, the joining of an older man with a much younger woman, is as common as paparazzi-inspired fender-benders. We’re all used to (if not tired of) seeing Woody Allen, Sean Connery, Michael Douglas, Warren Beatty, Clint Eastwood, et al, paired romantically with women young enough to be their daughters. But it’s an old Hollywood tradition, dating back to the days of Humphrey Bogart, Cary Grant and Jimmy Stewart. Even Charlie Chaplin liked ‘em young.

,” Uma Thurman (who is 35) plays 37 year old Rafi, a yuppie who falls in love with 23 year old artist David, played by Bryan Greenberg (whose real age is not part of his IMDb profile). When the May-December tables are turned, the issue of the age discrepancy isn’t just a casual casting choice, it usually drives the plot, or at least serves as major insight into the characters’ personalities.

” (1967), the affair between directionless college grad Benjamin (Dustin Hoffman) and his mother’s friend, Mrs. Robinson (Anne Bancroft) is about anything but passion. It’s about how the brittle Ben has no idea what he wants and is able to be used by the cold, empty older woman (dehumanized to the point of having no first name) who considers him a mere tool of distraction (and certainly not good enough for her daughter).

It’s not uncommon for the cinematic older woman to be a sad housewife. In Peter Bogdanovich’s “The Last Picture Show

” (1971), the (closeted) coach’s neglected, ailing wife Ruth (Cloris Leachman, seeming much older than her 46 years) beds young Sonny (Timothy Bottoms) just so she can feel something, anything. Leachman’s achingly poignant portrayal, bridging every emotion in the human palette deservedly won her an Academy Award for Best Supporting Actress.

Of course, “older” is relative. Only a kid would consider the ravishing 23 year old Jennifer O’Neill “old,” which is the case in the WWII-era coming-of-age flick, “The Summer of ‘42

” (1971). O’Neill plays Dorothy, a war widow who finds comfort in the arms of the teenaged Hermie (Gary Grimes, not the misfit Elf). The film’s soft-focus romance novel sensibility has, in these post-Laterneau times, devolved into a gauzy filter that, to some, barely obscures a clear case of statutory rape. 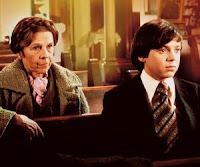 Then again, sometimes “older” ISN’T relative, as a THIRD entrant from 1971 shows (man, was that a year for this theme or what?). In the cult classic, “Harold and Maude

,” a maudlin, morose teenager (the otherworldly Bud Cort) falls in love with a vivacious 79 year old (Ruth Gordon, one of those actors who seemed to have been born old). The film is ham-fisted with a sugar glaze, but it works (aided largely by a perfect Cat Stevens soundtrack). Far from prurient, this gentle gem may be the richest love story mentioned in this column (and it features the largest age difference) and should be required viewing for every self-absorbed, sullen teen who thinks they know it all and that this ugly world ain’t worth the effort.

There are some films where the younger man serves as empowering beefcandy for the female lead. In “Thelma and Louise

” (1991), the long-suffering Thelma (Geena Davis) discovers all it takes is a romp in a hotel room with a cowboy-hat sportin’ bad boy Brad Pitt to regain a sexuality lost by years with a neglectful hubby. In 1998’s “How Stella Got Her Groove Back

Conversely, the allure of the older woman to the younger man has driven lots of movies. Nicolas Cage obsesses over Cher in “Moonstruck

” (1983). Jake Gyllenhaal goes for Catherine Keener in “Lovely and Amazing

But usually, the juvenile man is just not to be taken seriously. In “Something’s Gotta Give

Still, at least Julian’s mature tastes didn’t lead to his death. In 2001’s “In the Bedroom

,” EVERYONE disapproves of architecture student Frank’s (Nick Stahl) relationship with Natalie (Marisa Tomei), an older mother of two. Frank’s parents think Natalie’s a distraction. Natalie’s scary white-trash estranged husband Richard (William Mapother) thinks Frank’s a threat. So he kills him. “In the Bedroom” is a film that asks a lot of questions, one of them certainly being, Can a December / May relationship work?

How ingrained is the notion in movies that older men belong with younger women? Consider “Unfaithful

” (2002), Adrian Lyne’s uncommonly gray tale of adultery and its consequences. When Ed (Richard Gere) confronts the French bookseller (Olivier Martinez) with whom his wife’s been cheating, he asks, incredulously, “How old are you?,” seemingly shocked that Connie (the truly gorgeous Diane Lane) would deign to sleep with someone so young. The thing is, Gere is 16 years older than Lane. Martinez is just one year younger than she. But we’re expected to add this to the list of grievances Ed has against the younger man. The argument could be made that Ed was threatened by a handsome cad his wife’s age, but Gere’s not exactly the picture of insecurity. The implication is that Ed can’t believe his wife is diddling this immature kid.

The merits and pitfalls of the trans-generational relationship is one of those debates that’s never going to go away, especially with movies like “Prime” and the tabloid exploits of Ashton and Demi keeping it on the table. We just wanna know one thing: Will Joss Whedon’s “Wonder Woman” tackle the thousand-plus year age difference between her and Steve Trevor? Now THAT’S a generation gap.
____________________________________________________
ORIGINALLY POSTED in REWIND on MTV.COM, October 2005
Posted by Pops Gustav at 2:23 PM