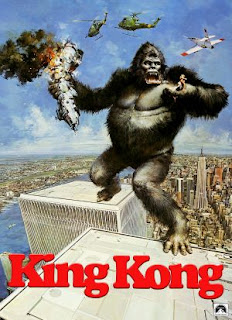 is almost universally beloved as well as revered for its groundbreaking visual effects, there doesn’t seem to be an abundance of that purist mentality that usually bemoans a remake (perhaps because Jackson proved he’s the man for the job with his “Lord of the Rings

Things were not exactly the same in 1976, when producer Dino De Laurentiis and director John Guillermin (“The Towering Inferno

”) gave the world an updated version of the classic Girl-Meets-Gorilla tale. That version of “King Kong

” is widely dismissed as a disaster of epic proportions, $25 million worth of overacting, bad effects and camp. But if you ask us, it’s actually not that bad, and more importantly, it’s become a now-poignant time capsule of America and New York City in the 1970s.

Eschewing the documentary-filmmaking angle of the 1933 original, 76’s “Kong” springboards from what was then so calmly called “the oil crisis.” Jeff Bridges stars as Jack Prescott, a shaggy Princeton paleontologist who stows away on an oil tanker bound for an uncharted island in the South Pacific. Charles Grodin plays Petrox Oil man Fred Wilson, who believes that the massive amount of CO2 emanating from the uninhabited island comes from huge oil deposits. Prescott, however, disagrees. Not only does his research indicate that there are natives on the island, but that the CO2 comes from massive exhalation of its.... larger denizens.

Jessica Lange makes her film debut as Dwan (that’s not a typo), a zodiac-obsessed Hollywood ingenue who is picked up in a raft by the tanker crew after her hard-partying yacht blows up (Dwan survives because she was on deck, offended by the movie being shown below: “Deep Throat”). 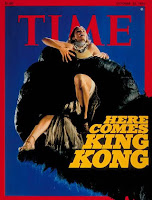 But of course, Dwan has far more drama ahead of her. Lange spends a lot of the movie clinging to a huge mechanical hand (the same method used in the ‘33 film). When Kong sniffs his new bride and gives her a giant leer, the feminist in Dwan surfaces and she pounds the giant ape’s snout, screaming, “You Goddamn chauvinist pig ape!... You wanna eat me? Then go ahead! Choke on me!” She does, however, seem to REALLY enjoy being blow-dried by Kong’s no doubt disgusting monkey breath after a waterfall shower.

Bo Derek and Barbra Streisand were considered for the Beauty to Kong’s Beast, but the producers nixed Streisand and Derek turned it down. All for the best. Because despite being pilloried by the press, Lange’s perfect as Dwan, a quintessential 70s female lead: an unconventional beauty, braless and ballsy, a little flighty at times, but far more complex than the screaming Ann Darrow (Fay Wray) of the 1933 film.

When the island’s natural reserves turn out to be a tad primordial to fuel combustion, Wilson decides that rather than return to the Petrox board empty-handed, he’ll bring in his promised “big one.” Meaning, naturally, Kong, to be used in a touring sideshow as an oil company mascot ala the Exxon tiger. When Dwan signs on for the ride, she thinks it’s going to be her big break. Wilson represents the worst aspects of corporate America: Extreme greed, hubris and arrogance combined with a disregard for the impact on a foreign culture and, maybe worst of all, blinding short-sightedness. Dwan, meanwhile, is endemic of the American lust for fame at any cost. 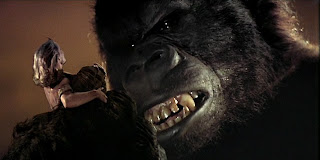 The screenplay by Lorenzo Semple Jr. (one of the primary writers of the 60s “Batman” TV show and film) does have some groanworthy one-liners (“What do you think did that, a man in a monkey suit?”) and there’s some pretty amazing sexual imagery involving a huge metaphorical wooden bolt and some very heavy petting. But the story does flow believably and the characters, while undeniably broad, ring true and empathetic (even Grodin).

The story of the film’s effects is legendary. FX designer Carlo Rambaldi constructed a life-size mechanical Kong, but the results were so bad that the filmmakers ended up using makeup artist Rick Baker in a monkey suit. The only scenes to utilize the giant robot ape come near the climax, as Kong is unveiled (from within a giant Petrox Gas Pump!) and at the end as he lies dead at the feet of the World Trade Center. Suffice it to say, he’s only convincing lying still.

Still, there IS a humanity to apesuit-Kong. You DO wince during the climax atop the World Trade Center as Kong’s riddled with machine gun fire while Dwan begs for him to pick her up again so they’ll stop shooting and a helpless Jack screams “You A**HOLES!” as he watches helplessly from the neighboring tower.

In addition to the oil crisis angle, the movie has Seventies written all over it, from the vintage, graffiti-strewn NYC subway cars to the Coolsville font used for the logo on the poster. Dwan even asks Kong, “I’m a Libra. What sign are you?” 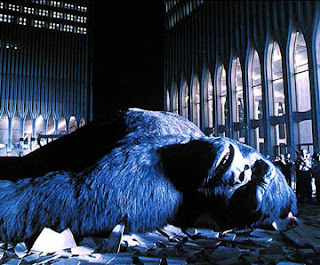 But what most makes this film a time capsule is, of course, the climax atop the World Trade Center. The towers were barely three years old when this movie hit the theaters, and their use was the biggest sign that this was not your grandpa’s Kong.

Seeing a helicopter crash into the side of the building and explode into flame is unsettling in a whole different way now. The irony of the subtext... the often brutal inhumanity of man.... cuts so much deeper on ground now hallowed.

It’s sad in a number of ways that the packaging of 76 Kong’s DVD was recently changed from the original poster to a shot of Dwan in Kong’s mighty paw. First, it’s depressing to think of a cynical marketing decision that hopes to fool less savvy consumers who might somehow think that Jackson’s “Kong” has made it to their local Wal-Mart in time for Christmas; And secondly, because deleting the image of Kong leaping (straddling? there is debate) the twin towers seems... well, wrong.

So, will Jackson’s movie be better than Guillermin’s? Duh. But it’s worth remembering that it’s been 29 years since this Kong... it’s a different time. And that’s the point. The 1976 “King Kong” is one of those movies that ironically gets better not only with time, but because of it. It’s a snapshot of an era, pre-CGI, pre-”Star Wars,” when, for better or worse, audience expectations were lower. We EXPECTED to see green outlines on superimposed images. We knew we’d be able to tell painted matte backgrounds. We still asked, “How did they DO that?” rather than cynically sneer if a computer image DOESN’T look better than real these days.