FEVER PITCH is billed as a romantic comedy, but to me, it's a mystery. 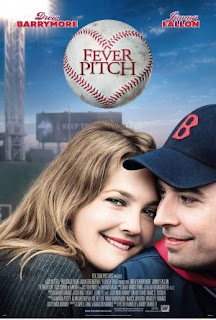 ,” Drew Barrymore finds herself competing for Jimmy Fallon’s affections, not with another woman, but rather... a sports team. A baseball team to be precise. The Boston Red Sox, to be exact. It’s actually the second time Nick Hornby’s 1992 autobiography

has been translated to the big screen. In 1997, Colin Firth starred in a British adaptation

that retained the book’s original subject matter: soccer (or, “football,” as the rest of the world calls it).

But American audiences cannot relate to the kind of rabid, sometimes violent obsession with that sport that most of the rest of the world shares. And so that most American of sports, baseball was substituted. Now, here’s the rub. I can’t relate to baseball either. Nor any other sport for that matter. Yep, I’m one of those guys... the anomalous freak that is the straight man who doesn’t give a *@#$! about sports.

I don’t mind playing sports, although it’s been a long time since I’ve thrown any kind of ball besides a super ball for a cat to chase. And the idea of watching a game being played wouldn’t necessarily be torture to me the way, say, sitting through a Nora Ephron film festival would be. It’s sports fanaticism as portrayed in “Fever Pitch” that I just don’t understand.

The only period in my life where I actually cared about pro sports was when I was in third grade and my best friend and I were huge Cincinnati Reds fans, even though we lived in Pennsylvania. Even then, I couldn’t seem to do the sports thing right. Because apparently, it’s all about proximity.

Jerry Seinfeld has a bit about sports fans actually caring only about the shirts. That once a beloved player is traded to another team, he suddenly sucks. And it’s true... only sports fanatics choose their idols based solely on how local they are. Imagine if we applied this criteria to other pursuits. Living in Northern New Jersey, I guess my favorite filmmaker would have to be Kevin Smith (and it most definitely is NOT), I would think Joe Piscopo was hilarious and I would be a huge fan of really awful classic rock tribute bands. I couldn’t even love Hoboken’s own Frank Sinatra because he moved away (and changed his shirt).

Why is sports fanaticism not considered as dorky as say, being a sci-fi fan? Why don’t people sneer at sycophants clad in reproductions of actual athletes’ uniforms? Isn’t Joe Sixpack’s beer belly stretching the confines of a XXL baseball shirt with Derek Jeter’s name and number stitched on it every bit as geeky as Chester Hornrims putting on the gold velour pullover of Captain James T. Kirk

? What’s the difference? Jeter’s real? Doesn’t that make it even more pathetic in some ways? After all, with a bit of dedication, talent and training, most people could become an athlete. As far as I know, the Starfleet Academy hasn’t been founded yet.

And then there’s the pronoun misuse that drives me batty. As in, “WE won the game!” Any time I hear a sports fan refer to the team he loves as “we” I always get all wide-eyed and say, “Wow, you’re on the team?!” and it always pisses them off. I mean, I love the films of Wes Anderson, but I don’t recall ever saying, “Hey, did you catch our latest movie, ‘The Life Aquatic

But what’s most vexing to me is how a team’s win or loss is taken so personally by the fan, as if it’s something they themselves accomplished or failed. It’s called Basking in Reflected Glory, and it can lead to such extremes as rioting. RIOTING! Because a bunch of strangers won a trophy? How does this make sense? And worse, yet, how is this acceptable behavior? A woman in Boston was KILLED during the “celebration” after the Red Sox’ pennant win. And it barely made the news. Again, if she would’ve been impaled by some “Star Wars” geek’s homemade light saber

, it would’ve been top story on CNN for a week. Oh, and Extra, too.

And yet, in “Fever Pitch,” it’s the non-sports fan girlfriend Lindsay who’s treated as the pariah because she doesn’t care about the Red Sox. Maybe she got scared by the 1996 film, “The Fan

,” starring Robert DeNiro as a knife salesman whose obsession with baseball destroys his life and takes a few others. That film is one of the few pieces of pop culture to display sports fanatacism as unhealthy. 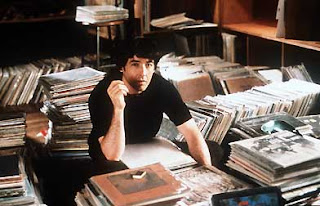 :” Music. Like Rob Gordon (John Cusack) in that film, I ran an indie record store and my large record and CD collection is anal retentively filed and cared for. Music is one of the main points of reference in my life and it’s inexorably linked to every love (and love lost) I’ve ever had. Insult one of my favorite bands or records and you’re more than likely to get some kind of dressing down... but always of the verbal bent, never physical. Maybe that’s the difference. Sports appeal to the more aggressive kind of guy, the alpha-male (which I am not). I’m much more like the artsy guy in the corner. My aggression is all passive.

To that end, I can’t reconcile sports fanaticism with a love of music. They just don’t seem to go hand in hand. Despite the attempts at marrying the two, mostly through the stadium and broadcast insertion of such Jock Jams nuggets as “Who Let the Dogs Out,” “Cotton Eyed Joe,” “Eye of the Tiger” or “We Are the Champions” and “We Will Rock You” (definitely not Queen’s finest hours), rock music and sports are an awkward fit. Sports is about as cool as a mullet and a gold chain (the couture of the baseball player).

Still, to each his own I guess. But personally, I’d like to see an “Alien vs. Predator

” who, as you will recall, is “nothing like those frat boy types.” Would it be a kick boxing match to the death or a debate as to which band is better, the Replacements

or the Goo Goo Dolls