The video history of the not-always-Fantastic Four 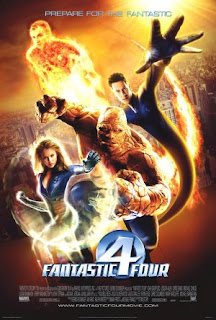 .” While the superhero group is the cornerstone of the Marvel Comics Group

, having started the Marvel Age of comics with their first issue by Stan Lee and Jack Kirby in 1961, Mr. Fantastic, the Thing, the Human Torch and the Invisible Woman (or Girl, depending) don’t have the kind of mainstream recognition that Spider-Man, the Hulk or even the X-Men do. 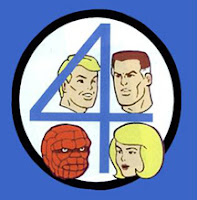 The FF first broke out of comics in 1967, when “The Fantastic Four” came to ABC TV as a Saturday morning cartoon. Produced by Hanna-Barbera, the show adapted stories directly from the comics and, despite limited animation (designed by the great Alex Toth) is fairly well-regarded by fanboys. But to the general public, the series didn’t have the lasting impact of another Marvel cartoon that premiered on that same Saturday morning: “Spider-Man

.” While Spidey (with his legendary theme song) became one of the most popular superheroes of all, the Fantastic Four remained B-listers in the do-gooder pantheon. 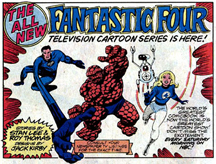 In 1978, the FF returned to Saturday morning cartoons with “The New Fantastic Four.” What made it new was that the Human Torch was nowhere to be found, replaced by a cute little R2-D2-inspired robot named Herbie. While the official reason was that rights for the Torch were owned by someone else for a possible movie, there were also rumors that in this early PC era, NBC was concerned about a hero who might inspire kids to “flame on!” Despite the involvement of Marvel writer Roy Thomas and the legendary Jack Kirby, the New FF didn’t exactly catch fire, and was canceled after one season. NBC did like the character of the Thing, however, and decided to spin him off into a new show.

So, who did they decide to pair the newly solo Thing with? Not the X-Men, not the Avengers... but rather prehistoric pals Fred Flintstone and Barney Rubble. In 1979, “Fred and Barney Meet the Thing” premiered, transforming “Benjy” Grimm into a teenager who could mutate into the rocky orange behemoth at will by slamming two rings together and shouting, “Thing Ring, do your thing!” While the Thing only mingled with the Flintstones in short bumper segments (sometimes doing vaudeville routines with anachronistic hat and cane), it was still an odd detour for the character. 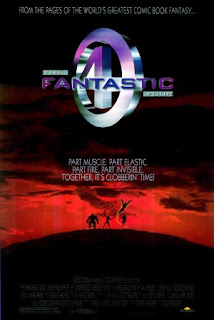 But the greatest indignity to the FF came in 1994, in the form of a “Fantastic Four” movie. That’s right, a live action movie. So how come you never heard of it before? Because it was never released. Producer Bernd Eichinger bought the movie rights to the Fantastic Four in 1986. But by ‘92, nothing had come to fruition and his rights were about to expire unless a movie was in production by the end of the year. So Eichinger went to legendary B-movie maven Roger Corman

and asked for a “Fantastic Four” movie FAST. Quality was never an issue. With a budget of a mere $1.5 million and less than a month for pre-production, “The Fantastic Four” was Dr. Doomed from the start.

And, boy, does it show. The sloppy costumes look like something fan-made to wear at a comic book convention. When Ben Grimm mutates into the rock-creature Thing, he somehow becomes SMALLER than his human form and the costume’s headpiece separates from his body at times. Dr. Doom’s tunic and hood look like they were made from his old fuzzy baby blankie. His voice is muffled by the face mask to the point of incomprehensibility at times (they couldn’t even afford to loop?). A too-young Alex Hyde-White plays Reed “Mr. Fantastic” Richards, with what looks like White-Out painted on the sides of his head. When he uses his super-elongating power, you almost feel the embarrassment of the production assistants who were holding the ten-foot prop rubber arms and legs just offscreen. There’s a POV-shot as a blind woman is chloroformed by Dr. Doom.... the BLIND woman’s POV. In the one and only scene where the Human Torch is fully engulfed in flames, he becomes an obviously animated character that looks straight out of an early video game (granted, this was primitive CG technology). He also flies in outer space, where there’s no oxygen to feed any fire, but.... uh.... well.... 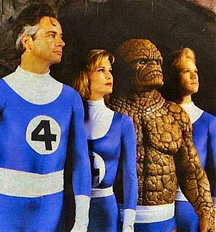 Rather than evoking a big screen superhero movie like “Batman

,” “The Fantastic Four” feels more like “KISS Meets the Phantom of the Park

.” The making of this film would’ve been an incredible season of “Project: Greenlight

In the end, Eichinger paid Corman’s production company $1 million to buy back the film and toss it in the closet forever (except for the inevitable bootleg copies that have become comic convention mainstays).

In 1994, Marvel (no doubt hoping to cash in on the movie) launched a new animated Fantastic Four. As half of the “Marvel Action Hour” (alongside Iron Man), this cartoon was most like the 1967 series in that it stuck pretty closely to the comic book source. Utilizing many Marvel supporting characters such as the Silver Surfer, the Sub-Mariner, Galactus and the Inhumans, the show lasted two seasons.

There are certain elements of every comic superhero that strain credibility when translated to live action. Sam Raimi realized that audiences, while accepting the idea of a man given the powers of a genetically altered super-spider, would still find it hard to believe that a high school student could create a super-strong, tensile, sticky web solution, so for his big budget “Spider-Man

” (2002), he made Spidey’s web shooting an organic power. The lore of the Fantastic Four contains more than a few ridiculous elements. There’s the idea of unqualified, amateur astronauts making a trek into space, Dr. Doom’s Transylvania-like home of Latveria, the soap-operatic, communal living style of the group (picture “The Real World” with superheroes) and some pretty silly super powers.

Some fanboys are nervous about the fact that every director attached to this project has a comedy background. Originally, Chris Columbus (“Home Alone

”) was slated to direct. Then Peyton Reed (“Down With Love

”) planned to make “Fantastic Four” as a tongue-in-cheek retro piece. And Tim Story, the man who finally brought them to the big screen, is best known for the “Barbershop

But maybe the idea of a comedic take on the Fantastic Four wasn’t such a bad idea. As superhero movies continue to propagate, audiences will inevitably get tired of overblown, too-serious interpretations of what originated as disposable children’s entertainment. Filmmaking technology might have finally evolved to the point where the Fantastic Four can LOOK good onscreen. But, even in this so-called Golden Age of superhero movies, asking the general public to take the FF seriously might still be a bit of a stretch. A fiery, rocky, invisible stretch.