Is taking on an accent the most difficult acting challenge of all?

,” Australian Nicole Kidman plays South African interpreter Silvia Broome, who overhears an assassination plot at the UN. The authorities seem hesitant to believe her, possibly because it’s difficult to trust someone whose accent keeps changing from South African to British to American and back to Australian. It’s not the first time Kidman’s had this problem. In the Civil War melodrama, “Cold Mountain

,” her strained attempt at a southern accent was only slightly more distracting than Renee Zellweger’s Yosemite Sam impression. Kidman’s a celebrated, award-winning thespian, and yet even she sometimes struggles with what can be one of the most distracting elements in motion pictures: the fake accent.

We’ve all had it happen: We’re sitting in a darkened theater, all swept up in the drama unfolding onscreen, lost in the world that the filmmakers have worked so hard to create. The sets are stunning, the costumes are perfect, the art direction has vividly recreated 19th century England. We buy it.

And we’re instantly knocked out of that world. You can’t discuss bad accents in the movies without mentioning the all-time worst perpetrator. In addition to his awful Indian accent in “Little Buddha

,” 1993’s Shakespeare adaptation, “Much Ado About Nothing

.” Maybe he seems the worst in “Dracula” because he’s paired with another mangler of diction, Winona Ryder. Together, they manage to single-handedly (double-handedly?) completely ruin an otherwise stellar movie with their somewhat, er, limited performances. I still shudder when I think of Reeves saying “We can be married when I re-TAHN” in an accent so bad it’d get him kicked out of a high school production of “My Fair Lady 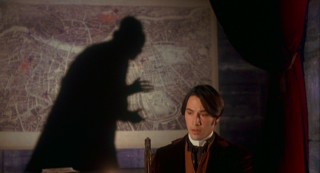 ,” Heather Graham in “From Hell

,” just to name a few. But lest you Brits get all cocky, many UK actors have found it just as tricky to sound like a yank. Witness Bob Hoskins struggling to sound like a New York detective in “Who Framed Roger Rabbit

?” or proto-Brit Kenneth Branagh as an LA dick in “Dead Again

,” or, yikes, Michael Caine trying to sound like a Texan in “Secondhand Lions

To be balanced, there are some actors from both sides of the Atlantic who can do a decent job of sounding like a foreigner. Renee Zellweger got good grades for her British in the “Bridget Jones

” films and both Angelina Jolie and Johnny Depp seem to be adept at accents (we’ll avoid stepping in the Meryl Streep debate, however). Conversely, Aussies Mel Gibson and Russell Crowe, Irishman Liam Neeson and London born Minnie Driver have all mastered sounding American.

Apparently, the British accent is universal, though, and I mean that literally. How many times have we seen a science fiction film where folks (particularly villains) in a galaxy far, far away somehow acquired the speech of jolly old England? It’s apparently so contagious in the “Star Wars

” universe that Princess Leia (Carrie Fisher) acquires a British accent whenever she’s in the presence of someone from the Empire. Jor-El (Marlon Brando) and the rest of the Kryptonian Council sound like members of Parliament in 1978’s “Superman

.” Back on Earth, albeit long ago, most Biblical epics affix said accent (some call it “stage diction,” but we know better) to the Romans (while Jesus usually has a good ol’ American accent).

Which brings up the curious practice of actors speaking accented English in favor of the native language of the character they’re playing. The presumption is that either the studio thinks audience is too lazy (or stupid) to read subtitles or the actor is too lazy (or stupid) to learn a foreign language. Regardless of the reason, it’s a silly convention. Nazis speaking to each other in English with phony German accents (as in “Schindler’s List

.” If we can accept the conceit of the characters speaking English, why do we demand they fake an accent? As the 18th century Austrian musical genius, “Amadeus

” (1984), Tom Hulce speaks very American English, but nobody in the audience got confused and thought that Mozart was born in Detroit.

There are a few stars (as opposed to actors) who are so iconic that for them to attempt other accents would only be distracting. And so Sean Connery retains his slushy Scottish brogue whether he’s playing an Englishman (let’s use “Robin and Marian

” as the example, since James Bond’s pedigree is arguable), a Russian sub commander (“The Hunt for Red October

”), an American professor (“Indiana Jones and the Last Crusade

”) or an Irish cop (“The Untouchables

”). Presumably, the last example didn’t matter, since most Americans can’t tell the difference between Irish and Scottish anyway (much to those nationalities’ bemusement).

Similarly, has Arnold Schwarzenegger ever even tried to ditch his thick Austrian accent? The only time filmmakers felt it was too distracting was in his acting debut in the 1970 B-movie, “Hercules in New York

.” In the original theatrical release, Ah-nuld’s voice was overdubbed by another actor. Subsequent post-superstardom re-releases have restored the original soundtrack.

When a filmmaker has the guts to actually use mixed languages in an American movie, it not only enhances the experience (think “The Godfather

” or “Lost in Translation

,” but it wasn’t as distracting as, say, Mickey Rooney’s Mr. Yunioshi in 1961’s “Breakfast at Tiffany’s

Okay, that’s an extreme example, but that racist caricature does call up a less politically correct time when accents were usually either cartoony or nonexistent. Few people at the time had any problems with Tony Curtis’ Bronx accent in the 1960 Roman Gladiator epic, “Spartacus

,” Charlton Heston’s very non-Hispanic portrayal of a Mexican cop in 1958’s “A Touch of Evil

” or even John Wayne’s usual western twang applied to Genghis Khan (!!) in “The Conqueror

So, I guess the question is, what’s better: a Bad Accent or No Accent? Considering Tom Cruise’s lousy Irish in “Far and Away

,” Brad Pitt’s similar butchering in “The Devil’s Own

,” or his sporadic Austrian in “7 Years in Tibet

,” Laurence Olivier trying to sound Yiddish in the 1980 remake of “The Jazz Singer

” or whatever that accent is that Jennifer Jason Leigh usually uses, I’d have to say NO accent is preferable. A missing accent is only temporarily distracting, while a bad one can sour a slushie for the length of an entire movie.