As much as we’ve evolved as humans, the fact remains that men can still become as feral as dogs when under the spell of feminine wiles. Sometimes all it takes is the crossing of a long pair of legs to bring out a man’s, shall we say, baser instincts. In “Basic Instinct 2

,” Sharon Stone reprises the role of crime novelist / illegal smoker Catherine Tramell, one of the movies’ top ten femme fatales. Here now, our list (sure to rile some film purists) of the sultriest cinematic seductresses to lead a man by the, uh, tail.

10) Jody Dvorak from “Kitten with a Whip

plays Jody, a juvenile delinquent who escapes from a reformatory and breaks into the home of a respected local politician named David Stratton (John Forsythe). Jody is wild, ferocious, dangerous and really, really sexy. As Jody drags David deeper and deeper into her dangerous world, we’re uncertain exactly what instincts she’s appealing to... parental or prurient? The film is wildly over the top, panned by many ( it was even given the “Mystery Science Theater 3000” treatment) but we think it’s a sizzler from the opening bongo beat.

9) Myra Langtry from “The Grifters

” (1990)
While some of the women on this list seem almost uncomfortable with the power they wield through their sexuality, there’s no reticence in Myra (Annette Bening). When not trying to entice her short-con boyfriend Roy (John Cusack) to think bigger, she’s seducing the local jeweler into buying fake diamonds and paying the rent with something no bank could cash. But what Myra fails to realize is that no matter how slinky she is, she can’t compete with a mother’s love....!!! Ew!

” (1997)
Okay, we know, awful, awful movie... but even as poorly costumed, ridiculously written and campily mis-directed as Uma Thurman is, she still handily embodies the most salacious Batman villain of all. The tall, curvaceous Poison Ivy probably doesn’t even need her pheromone dust to make Batman (George Clooney) and Robin (Chris O’Donnell) fight over her to the point of Dynamic Duo Dissolution! We can only imagine what it’d be like if the character were done RIGHT in a film (Hello, Christopher Nolan?).

7) Suzanne Stone-Maretto from “To Die For

” (1995)
Some small town gals will do anything to make it big. Suzanne (Nicole Kidman), the pretty blonde weather girl at a small town New Hampshire TV station thinks the big time is beckoning, but her restauranteur husband Larry (Matt Dillon) thinks her next part should be “Mom.” So Suzanne uses her considerable allure to convince not one, but three high school students (mostly a randy young Joaquin Phoenix) to take care of her stumbling block of a spouse. Kidman is the ultimate ice queen in this Gus Van Sant flick... and we mean that both figuratively and literally!

” (1992)
We just can’t leave the bisexually carnal Catherine off this list. Sharon Stone’s star-making turn in the Joe Eszterhas penned potboiler is one of the most memorable screen performances of the 90s... even if all she had to do was cross her legs. Regardless of whether or not Catherine offed her lover with an ice-pick, detective Nick Curran (Michael Douglas) can’t help but become obsessed with her. The film is just okay, but its violence, sexuality and nihilism have made it a flinty touchstone for debate among feminists, the gay community and probably Catherine Zeta-Jones’s friends.

” (1981)
Smoky-voiced Kathleen Turner delivered her most indelible performance in this neo-noir, set in steamy Florida. Matty is a scheming blonde who enlists the aid of a weak willed lawyer (William Hurt with a really bad mustache) to kill her rich husband for the insurance money (keep that plot in mind, it may pop up again). Writer / director Lawrence Kasdan took advantage of the more permissive 80s to (c)amp up the sexuality mostly implied in 40s film noir. “Body Heat” does contain one of the greatest lines in movie history as Matty opines to Ned, “You’re not too bright. I like that in a man.”

4) Kathie Moffat from “Out of the Past

” (1947)
Unlike most of the dames on this list, Kathie (Jane Greer) doesn’t rely on a man to do her dirty work. In this 1947 noir, the conniving fatale viciously kills two men herself... but that’s not the kind of thing that would scare off PI Jeff Bailey (quintessential tough guy Robert Mitchum). In fact, the seriously slinky Kathie actually brings Jeff over to the dark side. Twists, turns, double-crosses and murder make for one of the greatest films noir of all. In 1984, the film was awkwardly updated into “Against All Odds,” turning Mitchum’s character into... an ex-football player (?!).

" (1946)
Any time a female movie character is introduced by a slow camera pan that starts at stilettoed feet and inches upwards like a coiling snake, you know it’s gonna be a dame to die... or kill for. Poor drifter Frank Chambers’ (John Garfield) fate is sealed from the first glimpse of those gams. Platinum blonde Cora (Lana Turner) is almost always clad entirely in white, with two notable exceptions in which she wears all black (take a guess). Another “dame snookers sucker into offing husband for insurance money” film (this time set in a small town diner), the movie shocked audiences with its blatant sexuality (why, there’s even some tongue involved in the kissing!). The movie got a decent remake

in 1981 with Jack Nicholson and Jessica Lange.

2) Bridget / Wendy from “The Last Seduction

” (1994)
When discussing the sins of Bridget Gregory (a smoking Linda Fiorentino), where to begin? Convincing her husband Clay (Bill Pullman) to sell drugs, then stealing $700,000 from him and hightailing it out of town? Hiring an unscrupulous lawyer to rush a divorce settlement? Trying to convince small town horndog Mike Swale (Peter Berg) that her husband’s been beating her and needs to die? Murder? Using her new insurance gig to sell husband-homicide deals to cuckolded women? Or framing Mike for rape and splitting to Europe with the booty? Critics were falling over themselves trying to come up with new synonyms for sexy to describe Fiorentino’s performance, a part she never quite lived up to again. 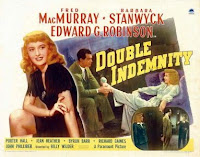 ” (1944)
Director Billy Wilder teamed with legendary crime novelist Raymond Chandler to write this adaption of the book by James Cain (who also wrote “Postman”), a movie that’s come to top many a list of the “Best Film Noir.” Phyllis (Barbara Stanwyck) is a blonde, anklet-sporting dame who seduces insurance man Walter Neff (Fred MacMurray) into offing her boring old rich husband for the life insurance payoff (yes, again, but THIS is the one to own). Tons of hard boiled dialogue, beautiful black and white cinematography and some scenery chomping acting make for a thrilling, sleazy good time. Plus, “Double Indemnity” has become such an iconic point of reference for so many other movies that it’s required viewing for the film-literate.