” certainly isn’t the first feature about anthropomorphized automobiles. In the past, we’ve met Herbie, “The Love Bug

,” the talking rental cars in the 1972 Austrian film, “Shirts Up, Knickers Down” (you don’t wanna know) and numerous vocal vehicles in educational shorts like (aptly enough) “The Talking Car” (1969).

Then there are talking TV cars, such as the reincarnated “My Mother, the Car” (1965), cartoons “Wheelie and the Chopper Bunch

Cars don’t have to talk to convey personality. There are hundreds of motion picture cars as memorable (if not moreso) than their human co-stars: Frank Bullitt

But what if some of those distinctive movie cars could talk? What if automobile voice technology that’s just in its infancy in modern cars were invented long ago?

F’rinstance, what if George Bailey’s poor, beat-up 1936 Oldsmobile had the ability to speak in the 1946 classic, “It’s a Wonderful Life

?” Belittled by Peter Bailey, soiled by goats, abused by George (he kicks its door in envy of Sam’s limo), and finally drunkenly driven into the oldest tree in Bedford Falls, this poor car was the brunt of the Bailey misery. “Hey, George! It’s not my fault you never traveled the world! So you couldn’t take a train or a plane somewhere exotic, what am I, chopped flivver? You coulda’ split this one-horse town in ME and driven to New York or LA or Mexico or somewhere on the continent! But no! You gotta drive me into a friggin’ tree and leave me for dead while you and that angel go cavorting around Pottersville, a town in which I didn’t even exist! Richest man in town my gas pedal!”

Over the past forty years, the various cars of James Bond

have deflected bullets, spewed nails, smoke and oil, traveled underwater and even turned invisible. So it’s amazing that none of them have traded quips with 007. Consider the Aston Martin DB5 of “Goldeneye

” (1995), equipped with a refrigerated compartment holding a bottle of champagne, adding to any mobile Bond-Girl seduction with a few smooth bon mots. “While 007 is preoccupied with driving me, perhaps I could interest you in a vibrating ejector seat? Me? The name is Martin. Aston Martin.”

What would a car sound like if it were being riddled with bullets, like Sonny Corleone’s sedan in “The Godfather 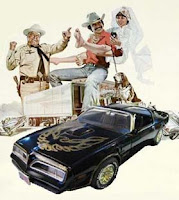 ” is enough of a cartoon that Bandit’s Trans Am suddenly whoopin’ it up as it made a physically impossible jump wouldn’t have been that much of stretch. Giving itself a CB handle like, say, “Chick-Cam,” the classic Pontiac would take after Bandit (Burt Reynolds) and wanna pursue other comely cars speedin’ east bound and down. “C’mon, good buddy, there’s a fine pink MG Midget headin’ west, let’s turn ‘er around and give ‘er a good emissions check!”

” (1991)? Trapped by the police (and society), the titular heroines of Ridely Scott’s feminist manifesto decide to drive off a cliff and into the Grand Canyon. But nobody asked the vintage T-Bird if he was up for the sacrifice!! “NOO! I don’t wanna die! I’m only 25 years old!!!” Then again, the car may have been a female, in which case she might’ve been down with the cause, perhaps singing an altered verse to Walter Egan’s “Blonde in the Blue T-Bird

Imagine a Batcave confab among the various Batmobiles of the silver screen. The classic converted Lincoln Futura

would probably wax poetic about the loss of style these days and complain about Batman leaving potato chip crumbs on his floor. Meanwhile, the tank-like “Tumbler

” would taunt the other Batmobiles about their inferior size, definitely overcompensating for something. Similarly, the phallic, machine-gun-laden Batmobile from Tim Burton’s films

would probably just blather on and on about Catwoman’s kiester... or maybe Robin’s.

” (2003) have been happy with its new owner, the Bride / Beatrix? Perhaps they would’ve bonded as the Bride (Uma Thurman) lay in the back seat for 13 hours willing her atrophied legs back into action. “Y’know, (name bleeped).... you seem much cooler than that slimebag who pimped me out... this could be the start of a beautiful relationship. Now let’s go get revenge together!”

Being in an animated Pixar film, Bob Parr’s abused Nash Metropolitan COULD’VE shouted out in pain as its super-powered owner crumpled, smashed and tossed it in the air, but it would’ve totally blown the realism of “The Incredibles

Still, more vocal rides are headed for a theater near you. Soon you’ll be able to see “Tales of the Rat Fink

And, yes, the rumors are true. As the ‘80s revival continues unabated, plans are underway for a big screen version of “Knight Rider.” We just hope that this time around, whomever voices KITT not only gets credited (the great William Daniels, the car’s voice in the show received no credit at all), but receives rightful position as second billing. Not behind whatever Hasselhoffian hunk scores the role of Michael Knight, but behind the real star of the show: the CAR.

After all, nobody’s going to go see “The Fast and the Furious: Tokyo Drift