There's some cold ones on the bottom...

The malted mixture of grains and water we call beer

has been filling the bellies of mankind since before the birth of Christ. In cinema, beer been used as sociological commentary, character shorthand and simple prop. In honor of this week’s “Beerfest

,” we take a look at the role of this mystical beverage in film.

Beer represents different things at different points in a person’s life. For many teenagers, getting drunk on beer (etc., but we’re discussing just brew here) is a rebellious (illegal) rite of passage. The planning, procurement, imbibing location and drinking partners all equally important parts of the experience. Perhaps no film ever demonstrated the teenage import of the beverage as much as “Dazed and Confused

In Richard LInklater’s ode to the 1970s, the end of the school year means it’s party time. A huge bash is cancelled when the kegs are delivered early, BEFORE the teenage host’s parents leave for their weekend trip. Subsequent aimless cruising with as much as a trunk full of brew leads to a gathering at the local game hall, where incoming freshman Mitch (Wiley Wiggins) earns big points by successfully purchasing beer from the nearby liquor store. Plans eventually coalesce for a “beer bust at the Moon Tower,” where a sea of inhibition-squashing beer brings many dramas to a head. True, marijuana is at least as important to the story, but beer is the great equalizer, giving the intellectual misanthrope the courage to throw a punch at the alpha-male jerk, the shy younger kid the nerve to kiss the older pretty girl and the complete stoner the intellectual weight of wizened philosopher.

Of course, when “Dazed” took place, the legal drinking age was 18, so drinking beer wasn’t quite the rebellious stretch it is today. By the time a person enters college, beer takes on a slightly different, but just as important role. No longer quite the forbidden nectar of high school, beer becomes the standard social lubricant.

” (1978), but booze-fueled frat parties ain’t one of ‘em. With Bluto’s (John Belushi) invitation to “Grab a brew…. don’t cost nothin’,” the tone is set. Between chasing girls, making life Hell for Dean Wormer and battling the uptight Omega jerks, the brothers of Delta House throw Toga parties and take road trips fueled more by Carling’s than gas. Flying bottles and kegs represent reckless abandon, not weaponry, beer is shaken and poured as baptismal fluid, it is the Deltas’ life’s blood. Their behavior is not something we would ever recommend emulating, but MAN, is it fun to watch onscreen.

By the time one enters adulthood, brand loyalty has usually settled in, the mere imbibing no longer as defining an action as WHAT kind of beer is favored. In film, cheap beer in a can is shorthand for the workin’ man; Stoudt on draft can be indicator of a British character; a bottle of Bud is a natural prop for a rock musician.

,” numerous characters with the titular occupation are named after traditionally blue collar brands of beer: Bud, Miller, Oly (short for Olympia), even the improbable moniker of Lite. Ironically, the actual beer shown in the film bears plain white labels with the simple word, “Beer” lettered in blue. Every product in the film is labeled in that same generic style, emphasizing the banality of consumer culture (although purportedly this was an unintentional effect borne out of a lack of product placement).

How ingrained is brand loyalty? Consider that wealthy Texans the Burdetts pay Bandit (Burt Reynolds) and Snowman (Jerry Reed) $80,000 to bootleg a truckload of Coors beer from Texas to Georgia in 28 hours in 1977’s “Smokey and the Bandit

.” Surely there’s lots of other brands available in Atlanta, but Big and Little Enos MUST HAVE COORS (which was illegal east of Texas at the time).

” (1986). Young amateur sleuth Jeffrey’s (Kyle MacLachlan) passion for imported Heineken is a bid for sophistication in the eyes of Sandy (Laura Dern), the teenage daughter of the detective investigating a severed ear found by Jeff in a field. But Jeffrey’s faux-sophistication is put in its place by the ear-slicer, psychopath Frank Booth (Dennis Hopper), whose tastes run a bit less refined. “Heineken?! Fuck that shit!! PABST!! BLUE!! RIBBON!!,” Frank screams, as he takes Jeffrey on a ride he’ll never forget. 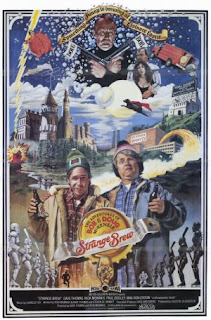 Still, no movie characters’ lives revolved around be working man’s champagne like Bob and Doug McKenzie, the hapless heroes of the 1983 SCTV

.” Two Canadian hosers (Dave Thomas and Rick Moranis, who also co-wrote and directed) get seeming dream jobs at the Elsinore Brewery as bottle watchers, making sure no mice end up in the beer. They soon discover a plot by the evil Brewmeister Smith (Max Von Sydow) to insert mind-controlling chemicals into Elsinore Beer, all part of a plan to take over the world!

There are few scenes in the film that don’t feature beer: Bob and Doug feed it to their dog, they scheme to get free two-fours, beer lines the walls of their house (okay, their parents’ house), it’s the holy grail in their homemade sci-fi opus, they even use empty bottles as makeshift scuba tanks. When Bob and heroine Pam (Lynne Griffin) are tossed into a vat of beer, instead of drowning, Bob drinks the whole thing, and that’s STILL not enough to put him off the stuff.

” gets drunk on Coors Banquet (one of the first cases of direct beer product placement). 1985’s “Beer” mocks the hyper-macho stereotypes used in its advertising. In 1994’s “The Shawshank Redemption

,” the unfairly imprisoned Andy (Tim Robbins) makes a deal with a guard to get beer for his fellow prisoners who are working tarring a roof, an act that makes the cons feel like “the lords of all creation.”

” and “Harold and Kumar Go to White Castle

” besides beer. Times change, technology and fashion evolve, but it’s impossible to imagine that the day will ever come when beer isn’t a part of culture, both real and pop. Perhaps nobody’s summed it up better than the immortal Homer Simpson, in an oft-used line sure to be uttered in next year’s Simpsons movie