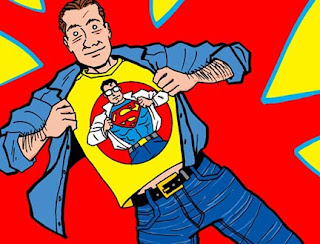 Webster defines “fanatic” as “one having obsessive zeal for and irrational attachment to a cause or position.” We’d update that to add “or element of pop culture,” as that breed of fanaticism has grown to religious heights. Some film fanatics are so extreme in their devotion to a movie or genre that it can define them.

The Goth scene is inexorably connected to the horror genre, black T-shirts emblazoned with movie monsters and knife-wielding maniacs as much a wardrobe staple as studded wristbands and black lipstick. The Harry Potter

community has grown to such strength that the books and movies have become unprecedented synergistic media events. And Star Wars

fanatics are so unwavering in their devotion to the worlds that George Lucas created that they forgive the sins of Episodes I, II and III.

But few movies in any genre are pre-scrutinized more than the comic book adaptation. The core audience, so-called comic book “fanboys” obsess over every detail from casting to costume design to adherence to the source. They often judge a film to be a failure before it’s even made, sometimes based on nothing more than one promotional photo.

On a fanboy scale of 1-10, I’ve slid from a peak of 10 in high school to about a 5.25. I don’t buy many comics anymore, but I still love the artform. When it comes to comic book movies, I understand the definition of the word “adaptation.” Translating something from one medium to another requires alterations. What works on the printed page may not in a live action film.

What matters is that the SPIRIT of the comic is captured. It’s why Bryan Singer’s X-Men

movies are bad; Singer significantly altered the Marvel X-books, but got the essence of the story right. Burton, meanwhile, created a distinctive look for Batman, but utterly failed to grasp the character’s ethos (Batman does NOT kill, especially with guns). So, I’m relieved that it’s Singer and not Burton (as was once planned) who’s in charge of bringing the biggest superhero of all back to the big screen with next month’s Superman Returns

Because when it comes to Superman, I’m pretty territorial. To me, Supes is more than just a comic book character, even more than my favorite pop culture icon. Superman

represents absolute power absolutely UNcorrupted. He represents humility (despite his name and primary colored costume), altruism and, yes, the hidden power of the underdog. Apply whatever Jesus / Freudian metaphor you like. The point is, to me, the Man of Steel MATTERS. So, when he’s done wrong, I can get a bit testy.

I’m not, however, one of those myopic fanboys who considers the only acceptable canon to be the current DC Comics version. I haven’t read Superman regularly in years, but I’d still say I’m as big a Superman fan as anyone. My idea of Superman is part Siegel & Shuster

... That most of those names probably mean nothing to you is irrelevant; You’d know him if you saw him.

Superman means different things to different people, of course, even within the comics community.

Graphic designer Steve Leach is likewise drawn to Superman’s altruism. “I love the idea of someone who is tremendously powerful selflessly using that power to benefit humanity. There's a lesson in there for everyone that's kind of lost in today's political climate: the more powerful you are, the more you should give back to the community.” Steve also finds the immigrant metaphor appealing. “He's like the embodiment of American history. He's literally an immigrant sent to the United States by his parents to make a better life for himself.”

Adam McAllister is the webmaster of Kal-el.org, a website devoted to gathering every tidbit of information on Superman Returns possible. While he hasn’t read Superman comics since childhood, he considers himself a huge fan of movie and TV versions of the character and says he has never been this excited for a film. To Adam, Superman is unique because he’s seminal: “There's something special about being the first... no other comic character has been able to touch him, in any way. He's got the best powers, the best origin story, the best symbolism, it’s just perfect.”

You’d think that, being the manager / buyer of NYC’s Sci-Fi / Comic Megastore, Forbidden Planet, Jeff Ayers would have a business AND personal stake in Superman Returns. But Jeff says superhero movies rarely have a lasting impact on comic book sales, and advance material for the film has left him mostly cold. But Jeff does care what happens to the character, having become enamored of Superman due to the first 1978 Christopher Reeve movie

(which he calls “the purest interpretation of a comic ever put to film”). Still, the potential of the character gives him some hope. “(The movie’s) got a leg up an on most, if only because it has one of the most inspiring, noble and venerable characters created in the 20th Century as its focus.” 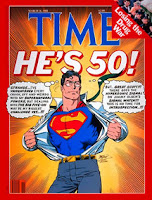 ) has a more ironic take on Superman. More of a Marvel Comics fanboy in youth, Chris still has an affection for the character, again due more to Reeve than anything else. Still, Chris appreciates Superman as a “kind of a retro-nostalgia trip... he represents a kind of throwback to a simpler, mid-twentieth century time or something. Nostalgic because he takes me back to my 70s childhood.”

But even someone who’s never cracked a comic book has an idea of who Superman is. He’s one of the most recognizable fictional icons in the World. Parents browsing the action figures at Target who don’t know Dr. Fate

will buy Superman toys for their kids because, well, he’s Superman.

In a 1988 TIME magazine cover story about Superman’s 50th anniversary, Christopher Reeve said, “I’ve seen that Superman really matters. It’s not Superman the tongue in cheek cartoon character (people are) connecting with; they’re connecting with something very basic: the ability to overcome obstacles, the ability to persevere, the ability to understand difficulty and to turn your back on it.” Who could predict that, ironically, Reeve would later come to embody those traits in real life as well after a horseback riding accident left him paralyzed in 1995.

Still, there’s a stigma attached to being a Superman fan in that Kal-El isn’t COOL. Especially as comics became darker and more nihilistic in the late 80s, the notion of the “overgrown boy scout” became ever more mockable. There’s nothing dark about Superman (aside from the colors of the new movie costume), there’s precious little angst in him. Sadly, nobility and selflessness aren’t considered “cool.” Plus, youth has a knee-jerk tendency to dismiss any part of pop culture that belongs to prior generations. Supes has been fighting the good fight for almost 70 years now. He could be your grandfather.

, Superman fits into that equation. So, yeah... I’ve got a personal stake in how Brandon Routh and Bryan Singer pull off Superman Returns.

It’s certainly not just comic book fans that feel possessive of adapted characters. Anne Rice fanatics fumed over the casting of Tom Cruise as the vampire L’estat in 1994’s Interview with the Vampire

. Petitions circulated to stop cinematic reimaginings of beloved old sitcoms The Honeymooners and Bewitched (not a bad idea, actually). Surf on over to www.craignotbond.com for just one of many heated arguments against Daniel Craig’s casting as the latest 007.

But will tears be shed if Craig doesn’t drink shaken martinis? Chris McCulloch feels that fanboys are more obsessive because “most of us started with comics when we were pretty young, so the characters are deply ingrained in our psyches -- they were literally our heroes.” Across the world, Superman fans are bracing themselves for Superman Returns, some foaming at the mouth with anticipation, others more cautiously hopeful, still more expecting the worst (I’m in the cautiously optimistic camp). And for some, the film’s success or failure might even dictate whether it’s a good or a crappy summer.