And the Oscar for best body slam goes to...

In “See No Evil

,” Glen Jacobs plays Jacob Goodnight, a psychopath picking off teenagers stuck in a run down hotel. Wrestling fans know Jacobs better as Kane, the WWE “Big Red Monster,” a 7-foot tall behemoth with some anger management issues. Playing a meathook-wielding maniac may not be much of stretch for Jacobs, but wrestlers-turned-actors aren’t often asked to play against type. Still, there have been some memorable big screen turns by denizens of the ring. At the sound of the bell, our Ten Favorite Cinematic Performances by Wrestlers!

” (1982)
The ultimate 80s wrestler has appeared in dozens of movies and TV shows, but in all honesty, he never seemed to hone his instrument. Acting just ain’t the Hulkster’s strong suit. So, we’re skipping such misfires as “Santa With Muscles” (1996) and “Suburban Commando

” (1991) in favor of Hogan’s appearance in the third “Rocky” film, just because the character he played was called “Thunderlips.” 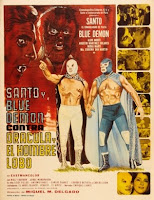 film from an oeuvre of over 50

is like trying to find the best lobster in the tank. One may be slightly better than the rest, but they all pretty much taste the same and they’ll all snap at you before you drop ‘em in boiling water. Our simile may be ridiculous, but so were the movies of Mexican wrestling icon El Santo (Rodolfo Guzman Huerta), pitting him against monsters, aliens, robots and other super villains over a period of three decades. For your consideration, we’ll arbitrarily select “Santo y Blue Demon Contra Dracula y el Hombre Lobo” (“Santo and the Blue Demon Versus Dracula and his friend the Wolfman”) because it’s a great title and it’s available on DVD! ¡Viva el Santo!!

” (1989)
We’re listing both of these wrestlers’ roles in Patrick Swayze’s anti-classic, “Road House” because how can you pick one nuanced performance over the other? As the bouncer with a bad attitude, Terry Funk channels the misdirected passion of Montgomery Clift! And as... uh... another big dude who likes to fight, Cowboy Bob Orton recalls the simmering angst of a young Brando! Remember, kids, “pain don’t hurt,” even when someone’s pulling on your mullet and forcing you to listen to Jeff Healey!

7) André the Giant in “Conan the Destroyer

?’” Call us heartless, but that film is a bit too saccharine for our taste. We much prefer watching the seven foot tall André “the Giant” Roussimoff in his uncredited role as the horned monster Dagoth, facing off against Arnold Schwarzenegger in “Conan the Destroyer.” (But our favorite André role is, of course, the bionic Bigfoot from TV’s “The Six Million Dollar Man.”)

6) Jerry Lawler in “Man on the Moon

” (1999)
This bio-pic about Andy Kaufman (played by Jim Carrey) recreates one of the legendary comedian’s most notorious moments, an on-air battle with pro wrestler Jerry Lawler (playing himself). In the early ‘80s, Kaufman, the self-proclaimed “Inter-Gender wrestling champion of the world” would wrestle any woman, invariably beating her, hurling insults about feminine inferiority. Feeling that Kaufman was likewise mocking the sport, wrestler Jerry Lawler began a very public bashing of the comedian, baiting him into a match that ended with a series of crippling, illegal pile-drivers. Some months later, the two enemies appeared on Late Night with David Letterman, where verbal sparring turned into head slapping and coffee throwing. Only years after Kaufman’s untimely death from cancer was it revealed that the whole rivalry was a set-up, a grand bit of performance art, perhaps the greatest acting job ever by a wrestler.

5) Mike Mazurki in “Night and the City

” (1950)
Actor / wrestler Mike Mazurki appeared as a tough guy in hundreds of movies and TV shows including such classics as “Some Like it Hot” (1959) and “the Big Sleep” (1946). But he tapped into some disturbing depths as a character called “the Strangler” in the film noir classic, “Night and the City.” This dark tale of a London hustler out to fix the underground wrestling world contains one of the most violent fight scenes put to film up till that time, and with his harsh, craggy exterior, Mazurki invokes little sympathy from the audience. It’s a brutal performance.

4) Tor Johnson in “Bride of the Monster

” (1955)
Tor Johnson, the 300-lb Swedish wrestler-turned-horror -mask has become best known as one of Ed Wood’s stock performers. Who can forget him as Inspector Clay, struggling with his lines BEFORE becoming a zombie in “Plan 9 from Outer Space

” (1959)? But we prefer his defining role as Lobo, the lumbering assistant to mad scientists in three films, the “best” being “Bride of the Monster.” Johnson bumps into flimsy sets, endures whippings by Dr. Varnoff (Lugosi) and pines for a Lois-Laney reporter (obsessively rubbing her fur hat), all dressed like a refugee from Burning Man. Pure evil genius. (In a bit of inspired casting, wrestler George “the Animal” Steele played Johnson in Tim Burton’s 1994 biopic “Ed Wood

” (2004)
Perhaps poised to be the first wrestler-turned-actor with some true marquee value, Dwayne “The Rock” Johnson’s film roles have been mostly testosterone-laden. In movies like “The Scorpion King

” (2005), Johnson gives his WWE fans just what they expect. But in “Be Cool,” the Rock shocked everyone with a truly hilarious performance as Elliot, a gay bodyguard with dreams of stardom. In fact, most critics pointed out Johnson as the sole bright point in the disappointing sequel to “Get Shorty

2) Lenny Montana in “The Godfather

” (1972)
It’s a tiny part in a massive epic, but the awkward performance of wrestler Lenny Montana as Corleone family enforcer Luca Brasi has become one of the iconic parts of that film. Flattered to be invited to the wedding of Don Corleone’s daughter, Luca sits and practices his short speech of gratitude, slightly frightening Michael Corleone’s (Al Pacino) new girlfriend Kay (Diane Keaton). When Luca meets a garroted end at the hands of the Tattaglia family, a message is sent to the Corleones that’s begets one of the classic movie lines of all time: “Luca Brasi sleeps with the fishes.” 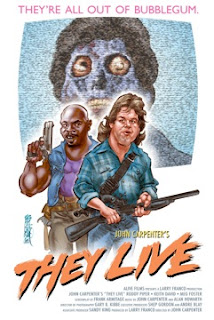 ” (1988)
Co-written and directed by John Carpenter, “They Live” is one of the last truly great B-Movies. “Rowdy” Roddy Piper stars as Nada, a construction worker who discovers a pair of sunglasses that allows him to see through the disguises of aliens hidden among us; Aliens who are taking over the world through subliminal messages planted everywhere. Seemingly innocuous advertising impels the mindless masses to “Submit to Authority” and “Consume”. The metaphor is as subtle as Piper’s acting, but it all works, thanks to a snappy script and some simple yet really creepy effects. One of the best film commentaries on the Reagan era.

It’s all part of the act: wrestlers are larger than life, their public personae sometimes the polar opposite of their actual personalities. With this kind of intensive method acting, wrestlers may well be perfectly suited to transition from the ring to the screen. We may not see Triple H in “Brokeback Mountain II,” but with The Rock tapped to bring “Johnny Bravo” to life, it seems as if fewer holds are being barred. So to speak.