Truth, Justice and the Fanatical Way part 2: The Seduction of Spoilers 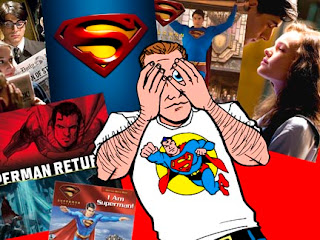 In their wildest dreams, movie studio publicists of the past couldn’t have predicted that technology would one day practically do their jobs for them.

Thanks to the internet, all it takes to get millions of people buzzing about an event film is to put out one photo far in advance of the film’s release. Last summer, Warner Bros. released a promotional shot of Brandon Routh as Superman posing against an art deco background. Almost instantly, this first Superman Returns

image was copied and pasted into a thousand websites, forcing a fury of speculation about the fate of the entire film.

With no other information available, fanboys debated and dissected the photo like the Zapruder film. The most common complaints (most of which I shared) were that the colors of the tweaked uniform were too dark, the bright primary crimson of Superman’s cape, boots, shorts and ‘S’ shield dimmed to a subtle maroon. The ‘S’ itself became a controversy, with its raised relief and small size. The shirt’s neckline was deemed by many to be too high. Superfluous ‘S’ logos were added to Kal’s belt and the heels and soles of his boots (?) while the yellow version of the design that customarily adorns his cape was excised (presumably because it would prove too time consuming to animate digitally).

I was also a bit befuddled by Superman’s BROWN hair (instead of the traditional blue-black) and that it’s parted on the wrong side; In order for the trademark S-shaped spitcurl to fall onto his forehead, Superman’s hair needs to be parted on the LEFT. In the movie, it’s on the right. This, friends, is what’s called kryptonitpicking.

Soon, there was more information coming. On Bluetights.net, director Bryan Singer took a page from his pal Peter Jackson and instituted a series of online video journals documenting the production of Superman Returns. Jackson’s weekly online King Kong production diaries delved into the making of that blockbuster so deeply that they were released as a DVD set that’s even longer than the 3-hour movie! Add to that the POST-production diaries that are a bonus feature on the actual Kong DVD and you have enough pre-release “making of” content to choke a dinosaur. While Jackson was careful to not show any completed scenes in his diaries, to keep as much mystery to the film as possible, it’s undeniable that many who faithfully watched them weren’t exactly going into Kong in a fog.

Singer’s Bluetights blogs featured the usual behind-the-scenes stuff: storyboarding, costume and set design, special effects and witty (sometimes) banter from the cast and crew. But after 27 installments, for reasons unexplained, the postings abruptly stopped. Rumors circulated that Singer was tired of having every single move he made questioned by the fans. A late installment filmed at a Q&A session at the San Diego Comic-Con last summer featured a visibly annoyed Singer defending his Superman’s costume for the umpteenth time.

I had mixed feelings about the blogs stopping. I was disappointed because I had been gobbling up the information. But I was more than a little relieved for the same reason. In theory, I want to know as little as possible when I finally see the movie, but in practice, I’m too much of a fanboy to ignore any beefy chunks of content available online.

They’re called “spoilers” for a reason. As a teen, I had two of my favorite movies ruined by knowing too much in advance. One was my fault. I foolishly read the novelization of Alien

before the movie came out, thus eliminating much of the shock of the classic “chest-bursting” scene (in contrast with my friend Nathan, who was curled up in his theater chair, clutching his legs, gasping in horror).

Far more damaging, however, was that day before my 9th grade English Class in May of 1980 (yes, I’m that old) when my pals Jeff and Bill told me that Darth Vader was Luke Skywalker’s father. They had read the book

of The Empire Strikes Back

and decided it would be funny to kill the movie’s biggest scene for their ol’ chum Karl . While we did all line up on opening day to see the movie together, to this day, I’ve not completely forgiven them. 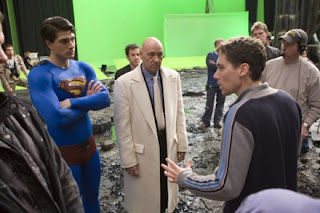 For some fans, there’s no such thing as too much information. Adam McAllister’s kal-el.org gathers every bit of content on Superman Returns possible, posting daily updates. While Adam is careful to warn his visitors of spoilers, the sheer magnitude of material he collects makes it impossible for him to remain as ignorant as he’d like. While he says he’d “rather know hardly anything about the plotline,” he does feel that when you have a personal stake in a film, a little knowledge isn’t necessarily a bad thing. “It’s good to know a general outline for a movie if it’s something you’re into.”

Creator of The Venture Bros.

, animator Chris McCulloch agrees. “Something you might think was slow or boring while watching it cold, if you’re braced for the ‘first hour of exposition,’ you might have more patience.”

For many, the desire to have a fresh cinematic experience is the priority. Superman collector Steve Leach notes that “Spoilers are the unfortunate side effect of living in the information age. I am trying to avoid them, though I know it’s inevitable that I’ll read something I wish I hadn’t.”

Jeff Ayers, manager / buyer of NYC comic store Forbidden Planet found that avoiding all spoilers worked to his benefit in regards last year’s biggest comic book movie. “I blacked my senses out for the weeks leading up to Batman Begins

. I saw no trailers and was even reluctant to talk about the film in the store or with my friends. I saw the film in IMAX the day after its release... and it knocked my socks off!”

already and as I write this, the movie’s still two months away. My knowledge of the character coupled with what I’ve seen so far and the fact that the film uses Reeve’s first two Superman films as the basis has caused me to be fairly certain I’ve figured out a number of major story elements (which I won’t share).