AN INCONVENIENT TRUTH shows that Hollywood's been armageddon it wrong for years!

In a way, “An Inconvenient Truth” could be considered a sequel (or prequel?) to 2004’s eco-disaster flick, “The Day After Tomorrow

.” In the Roland Emmerich film, abrupt global warming leads to worldwide catastrophes: Tornadoes destroy Los Angeles, Japan is pummeled by giant hail and New York City is flooded by a tsunami. A new ice age subsequently dawns, and climatologist Jack Hall (Dennis Quaid) must trudge from Washington DC to New York City to save his son Sam (Jake Gyllenhaal), holed up in the New York Public Library. The rescue story is a ludicrous subplot, shoehorned into the larger story, seemingly in an attempt to adhere to basic screenwriting structure.

As for the science of “The Day After Tommorrow,” it’s greatly exaggerated for dramatic effect, while certainly rooted in reality. For example, the Greenhouse effect may be forcing the polar ice caps to break and cause water levels to rise in the oceans, but the odds of a sudden huge tsunami flooding Manhattan is as unlikely as Dick Cheney winning any marksmanship awards. When scientists refer to “abrupt changes” to the environment, they’re talking about a period of decades, not days.

“The Day After Tomorrow” may have been more blatant with its message, but movies have been using science (and, yes, pseudo science) to predict man-made ecological disaster for decades. In 1995’s “Waterworld

,” the melting of the polar ice caps has flooded almost all of the planet. Kevin Costner plays the lazily-appellated “Mariner,” a web-toed mutant who floats around the world on a trimaran, searching for dry land, fresh water and vegetation while battling evil pirates (sailing on an un-subtle metaphor, the infamous Exxon Valdez oil tanker) . The movie was a critical and commercial disaster, most remembered for a scene where Mariner drinks his own purified pee. 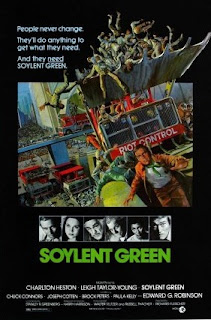 .” It’s 2022, and pollution-fed global warming has led to a constant blistering heat that’s killed crops and livestock. Overpopulation has gotten so bad that the government offers incentives to people willing to euthanize themselves. Food has become so scarce and expensive that most people subsist on a number of government subsidized synthetic foodstuffs produced by the Soylent Corporation. Charlton Heston (the undisputed king of the 70s dystopian futuristic film) stars as police detective Robert Thorn, who accidentally discovers the queasy connection between the euthanasia centers and the production of Soylent Green (the surprise ending is about as well kept a secret as that of “Citizen Kane” or “The Sixth Sense”).

One year prior, “Silent Running

” likewise dealt with the death of all vegetation on Earth. In an unspecified future, the little remaining plant life exists only on spaceships with “greenhouse domes” attached to them. Bruce Dern plays Freeman Lowell, the mild-mannered caretaker of the vegetation who gets along better with his robot assistants than his fellow crewmen. When orders come from Earth to destroy the greenhouses so the ships can become commercial freighters, Lowell does not go along quietly. “Silent Running” boasts a simple, hippie message, beautiful special effects (the movie was directed by Douglas Trumbull, the pioneering FX supervisor on “2001: A Space Odyssey

”) and most of all, a heartbreakingly sad ending emblematic of the cinema of the 1970s. It seems ripe for a remake.

While not a work of fiction, 1982’s “Koyaanisqatsi: Life Out of Balance

” has been interpreted by many to be a rumination on how our consumerist, technological society is going to be our downfall. Godfrey Reggio’s impressionistic film is comprised of mostly time lapse and slow motion photography (set to a minimalist synth score by Philip Glass

) of a world moving so fast that humanity can barely keep up. The climax of the film expands upon the title with prophetic Hopi sayings, including “If we dig precious things from the land, we will invite disaster.”

Still, most serious discourse on global warming skirts around an issue that’s central to speculative fiction built around the theory. The hard truth, to quote George Carlin from his brilliant 1992 “Jammin’ in New York

” performance, is that “The planet... is fine.” The real issue isn’t the imminent demise of Earth; It’s of us. The world (barring some grand cosmic armageddon, entirely possible) will continue long after the last drop of fossil fuel has been burned, long after the last chip of ice shelf has floated downstream. The planet will just be bereft of life. While most environmentalists claim to be trying to save the Earth, they are, in fact, striving to save its inhabitants. Movies tend to tap the id more than the superego. While “An Inconvenient Truth” may have incontrovertible science to back up its thesis, in the end, ironically, “The Day After Tomorrow” may well be more honest.
_________________________________________________
ORIGINALLY POSTED in REWIND on MTV.COM, May 2006
Posted by Pops Gustav at 4:41 PM