10 ginchiest movie gadgets of all time! 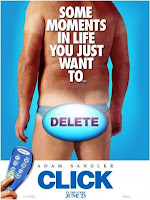 ,” Adam Sandler plays Michael Newman, an overworked architect who discovers a TRULY universal remote, one that allows him to pause, fast forward, mute and rewind real life. While everyone in the audience fantasizes about what part of their life they’d love to relive (or skip past), we’ll take this opportunity to rewind to our top ten favorite movie gadgets.

” (1979)
Sometimes all it takes is one simple idea to change your life. In Carl Reiner’s farce, “The Jerk,” gas station attendant Navin Johnson (Steve Martin) rigs a nose-resting glasses handle for an entrepreneur who then markets it as the “Opti-Grab.” The item becomes a sensation, earning Johnson untold millions.... until disaster strikes and Navin’s left with nothing but a thermos. But that’s all he needs.

” (1968)
She's a five-star, double-rated, Astro-navigatrix with a lust for life and her mission is to find the missing Durand-Durand. No, not the band, but the renegade scientist the band’s named after. Roger Vadim’s supremely campy adaptation of the french comic strip “Barbarella” is a sexy shagadelic romp and the gizmos in it are a bizarre amalgam of medieval looking metal and old west wood with things like chrome hands attached for no apparent reason. Austin Powers would be right at home in Barbarella’s (Jane Fonda) fur-lined space ship.

”
While not quite as stylish as the shoe-phone from “Get Smart,” the communicator used by the crew of the USS Enterprise (from the 1960s TV show through their many movies) may be the most prescient gadget in sci-fi history. Anyone who’s ever flipped open their phone and walkie-talkied a pal owes a debt to Mr. Spock and Captain Kirk (and they couldn’t even text message!). Now if only our Razr would make that cool communicator chirping sound...

” (2002)
You can’t have a list of movie gadgets without a couple items from Q Division. Whenever James Bond wears jewelry, you know it’s not for show. In “Die Another Day,” 007 (Pierce Brosnan) wears a gold ring that, when turned, emits ultra high frequency soundwaves, capable of smashing glass or giving you a really, really severe migraine (no, it’s not a wedding ring).

” (1992)
The various Batmen’s various utility belts have been loaded with all sorts of goodies, from Adam West’s Bat-Shark Repellant to Christian Bale’s magnetic grappling gun. But our favorite (as in most ludicrous) bat-gizmo is the programmable batarang that Michael Keaton uses in “Batman Returns.” Although since the villains in Tim Burton’s plodding sequel don’t really move that much, programming the location of them into the weapon seems really superfluous.

” (1980)
In the snobs vs. slobs comedy classic, Real estate mogul Al Czervik’s (Rodney Dangerfield) poor caddy totes around a gargantuan golf bag that carries far more than just his irons. Loaded with a remote controlled club-ejector, built in stereo (that sadly blares only Journey) and a tapped beer keg, the bag pulls off the amazing feat of making golf seem fun!

4) The Mini-Breathing Device from “Thunderball

” (1965)
We’re listing the pen-sized oxygen apparatus from 007’s fourth film, “Thunderball” just because the mini-scuba was so convincing that the British military contacted the filmmakers for the specs, proving that sometimes “military intelligence” is indeed an oxymoron.

” (1987)
Granted, it’s not a toy you’d want your kids to play with, but the mystical puzzle box from Clive Barker’s seminal “Hellraiser” is one way cool Rubik’s Cube. Promising pleasures beyond anything imaginable in the physical realm, the puzzle box has one drawback: If you solve it, mystical demons called Cenobites are released and it’s THEIR idea of “pleasure” that you have to endure. One man’s pain, etc., so, it’s best leave the puzzle... unsolved.

2) The Neuralizer from “Men in Black

” (1997)
For the Men in Black, monitoring and policing all alien activity on Earth is tough, especially if a bunch of Worm Guys get antsy and decide to party with Lindsay Lohan at Bungalow 8. Now it’s up to someone like Agent J (Will Smith) to round up the Wormies, then pull out his pen-sized Neuralizer (after donning the requisite Ray Bans) and mind-wipe all of the hotspot revelers into forgetting the existence of the aliens. J then has about thirty seconds in which to create a new memory for the Neuralized, perhaps explaining why Lindsay thinks she has a relationship with Brett Ratner.

” (1977-2004)
Okay, while we’re on record as being no fan of the Star Wars series, we can’t deny the utter greatness of the light saber. Simultaneously classical and futuristic, elegant and distinctive (what’s your saber color?), with a super-cool buzz-hum, whether wielded by a Jedi Muppet or a CGI sith lord, the Light Saber is, we gotta admit, the coolest movie gadget of them all.