Truth, Justice and the Fanatical Way part 5: More Powerful than a Crappy Adaptation 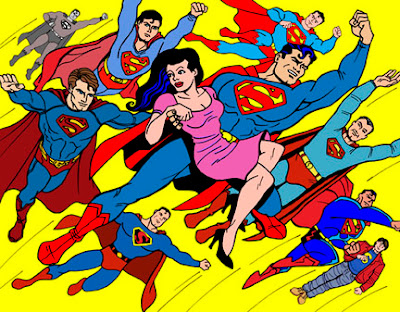 After almost twenty years, the last son of Krypton finally returns to the big screen this week in Superman Returns

. After all the excitement, planning, collecting and waiting, one fanboy fear remains: What if the movie stinks?

Comic book fans are often skeptical of a superhero movie while it’s in development, defensively fearful of an adaptation that doesn’t respect the source material. But ironically, fanboys can be far more forgiving than the general public of a lackluster comic book film once it’s released. In 1989, fans rushed to defend Tim Burton’s Batman

, claiming that critics didn’t GET its darker tone, ignoring the fact that the movie’s pace, story and dialogue were all pretty bad.

Currently, the internet is abuzz with debate as to whether or not Superman Returns will do justice to both the comic book character and the late (much beloved) Christopher Reeve. Over the past year, many skeptical fanboys (myself included) have come to embrace this newest Man of Steel, grudgingly accepting the dark costume and Lois’ offspring. But we’ve been burned too much in the past (Daredevil

, anyone?) to approach any comic book film with unguarded enthusiasm.

Still, Superfans should be counting their blessings. In regards a new big screen Superman movie, things could have been... and almost were.... so much worse. 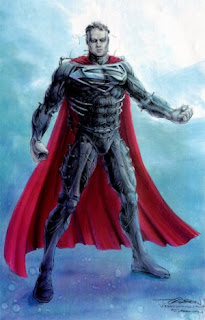 When Batman producer Jon Peters acquired the rights to Superman in the early 1990s, his take on the character was less than reverent. With marketing dollar signs in his eyes, Peters showed outright hostility towards the character, demanding a Superman movie with no flying and no “gay” costume. Peters was thinking more Star Wars than superhero, wanting Kal-El to fight using Kryptonian weapons, including a silver “S” shield that came off an all-black outfit and transformed into daggers (to battle, no lie, a giant spider).

Over the next decade, numerous directors and writers struggled with a handful of concepts, none of which clicked. In one version, Superman dies fighting über-monster Doomsday and his “life essence” leaps into Lois Lane, immaculately impregnating her. Days later, she gives birth to a super-baby who grows to adulthood in a matter of weeks (adding a real Oedipus complex to the lore). One-time director Tim Burton wanted to play up Superman’s “darker, more murderous side” (uh, Tim, he doesn’t HAVE one). In another script by J.J. (Alias) Abrams, Krypton doesn’t explode (?) and Kal-El is sent to Earth to prepare for a Kryptonian invasion (?!?) being set up by a Kryptonian Lex Luthor (?!??!). For a while, director McG was tapped to do a campy Superman in the vein of his Charlie’s Angels adaptation. Around that same time, Wolfgang Peterson was slated to direct an epic battle between DC Comics’ biggest icons, Superman vs. Batman.

As for rumored casting, ignoring Richard Donner’s masterstroke of hiring the unknown Christopher Reeve to star in 1978’s Superman

, producers considered actors such as Nicolas Cage, Ashton Kutcher, Jude Law, Brendan Fraser and even Justin Timberlake (!) for the lead. Forgetting that the stunt casting of Richard Pryor doomed Superman III, Chris Rock was slated to portray Jimmy Olsen and both Tim Allen and Jim Carrey were mentioned for the part of the alien / android Brainiac.

Thankfully, none of these ill-advised features made it past pre-production, leaving the dormant franchise available for avowed Superman acolyte Bryan Singer to approach the material with a reverence missing from the aborted versions.

But will that reverence translate into a Superman that satisfies both fanboys and the general public? Actually, Superman’s wide and varied track record on both big and small screens places the odds WITH Singer.

Consider that right now, there are FOUR different versions of Superman in the popular culture: The comic book Superman, the Kal-El of Superman Returns, the young Clark Kent of Smallville

and the animated hero of the new Brainiac Attacks

. All of those Supermen differ from each other (and in fact, DC publishes more than one version of Superman, further complicating the matter). So why isn’t anyone confused? It’s because Superman is so ingrained in our collective consciousness that everyone already has a slightly different idea of who Superman is... and they’re all right.

A friend of mine was very upset when she discovered that Lois Lane is a mom in Superman Returns. I pointed out to her that if she doesn’t want Lois Lane to be a mother, then, outside of the context of the new movie, Lois isn’t a mother. I’m not nuts about the idea of Clark and Lois being married (as they are in the comics), so to my mind, not only are they unwed, but Lois still doesn’t know that Clark Kent is actually Superman. 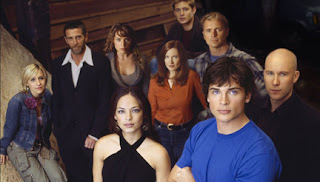 All of these different takes on the Superman story can coexist because the character has become so iconic that he’s far bigger than any single version. The nutshell is solid and perfect: The sole survivor of an advanced alien civilization, raised in bucolic small town America with ironclad values, decides to use his incredible super powers to help mankind rather than rule it while masquerading as a powerless everyman. It’s a story that’s endlessly adaptable to changing times.

While many fanboys detest the TV show Smallville for taking more liberties with the Superman canon than any other adaptation, their myopic hard-lining misses the big picture. Smallville is a faithful version of Superman because it remains true to the heart of the story. Resisting the urge to make young Clark Kent (Tom Welling) cool or edgy, Smallville shows the selflessness of the character, the struggle between desires and obligation better than perhaps ANY adaptation. If the show has any drawback it’s that by now, the extrapolation of the inevitable makes it impossible to believe that ANYONE in Smallville won’t know who Superman is when he finally puts on the costume (especially Lex Luthor).

nor when he temporarily became an energy being in the comics in the mid 1990s. Rather, it was the 1993 TV series, Lois and Clark: The New Adventures of Superman

Lois and Clark reimagined the tale as a romantic comedy, a radical concept that might’ve worked had the show’s creators had any kind of grip on the characters themselves. Sadly, they didn’t, as evidenced by their reversal of the myth’s key tenet: They made Superman the disguise and Clark Kent the real persona. A horribly cast Dean Cain played Clark exactly the same as Superman, with the glasses and (really atrocious) costume being the only difference. Audiences couldn’t relate to either side of Kal-El (Ironically, comic creator John Byrne made this same mistake when he revamped Superman for the comics in 1988).

Likewise saddled with bad special effects, a pathetic Luthor (John Shea), and awkward attempts at making the show hip (Clark gets tickets to a Pearl Jam concert!), Lois and Clark never found a comfortable balance between the conflicting genres of romantic comedy and action / adventure. The series is widely (and vociferously) dismissed by most Superman fanboys.

I’m fairly confident that Superman Returns will be much better than Lois and Clark, but either way, it won’t matter. The bottom line is, regardless of whether Superman Returns is a smash or a dud (both creatively and commercially), it won’t replace anyone’s idea of who Superman is; It will only add to a long, rich, complex legacy. 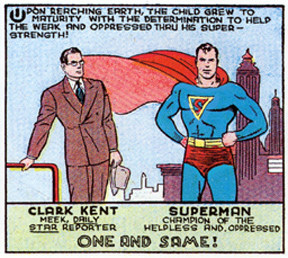 But the question remains, in a world where an angst-ridden Spider-Man just wants to be loved, an angry Batman is obsessed with vengeance and feared mutant X-Men just wanna be left alone... does Superman fit in?

In a 2002 Vanity Fair article, writer James Wolcott commented that “pop myth adapts, rewrites its own history, reflects contemporary values in an enlarging mirror, and, like Greek myth, cloaks human fears and desires as godly forces and supernatural feats.”

Superman represents our greatest desires in their most noble terms. Yes, it’s a fantasy about absolute power. But moreso, it’s about using that power for the greater good. In fact, in times as trying and cynical as we live now, maybe Superman means more than he has since he fought for the repressed during the great Depression. As 9/11 so painfully reminded us, the concepts of sacrifice and heroism will never become obsolete, and Superman remains, after almost 70 years, the quintessential pop culture embodiment of those virtues. After all, they don’t call it the “never ending battle” for nothing.
_____________________________________________________________________
ORIGINALLY POSTED as THE FANBOY DILEMMA PART 5 on MTV.COM, June 2006
Posted by Pops Gustav at 11:30 PM