In “The Ant Bully

,” an insect-terrorizing kid is magically shrunken down and put on trial by an ant colony for crimes against, uh, bugs. The animated film teaches lessons about tolerance, cooperation, loyalty and anger management... as well as featuring a ton of gags about being a teeny, tiny person.

It’s a postulation that’s been exploited by some memorable films over the years: What would life be like if you suddenly found yourself the size of an action figure? 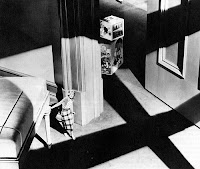 The first film to depict shrunken humans was “Dracula

” (1936). In the movie, a scientist develops a way to shrink living things, the idea being that the world’s natural resources will last a lot longer if one loaf of bread can feed a family for a year (we won’t even get into the faulty reasoning here). The fact that, once shrunken, a person’s free will disappears allows for a cross-dressing escaped con (legendary actor Lionel Barrymore) to use the doll-sized living zombies as tools of revenge against the corrupt businessmen who framed him and sent him to jail.

The movie’s a campy curiosity, but it was groundbreaking in terms of its simple yet effective effects. Oversize props and sets were combined with trick photography to make normal sized actors seem like they were just a foot tall, a method that would be utilized in film right up to the present day.

”’s Ernest Schoedsack), a group of scientists fall victim to twisted genius Dr. Thorkel’s radium-fueled reducer ray. Set loose in the Peruvian jungle, the group must contend with suddenly deadly cats, chickens, raindrops and alligators. Actually, alligators are a drag no matter what size you are.

Luckily, the evil doctor’s ray has only temporary effects, and after ten days, the survivors revert to full size. The same can’t be said for the star of the undisputed classic of this mini-genre. 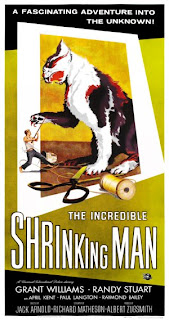 In 1957’s “The Incredible Shrinking Man

.” Grant Williams stars as Scott Carey, a man whose exposure to a mist of radioactive pesticide (!!!) causes him to slowly but surely shrink to microscopic stature.

A number of things distinguish “ISM” from its predecessors. First, while prior filmic shrunken peeps bottomed out at doll-size, Scott’s shrinking doesn’t stop. So, while his house cat is an early foe (as in “Dr. Cyclops”), that’s nothing compared to what he has to battle when he’s less than an inch high. In a scene that still elicits shudders, Scott faces off against a ravenous spider using a knitting needle as a sword.

But the real kicker comes at the film’s climax. As the entire movie is narrated by Scott, the audience knows that he doesn’t die at the end. But rather than giving us a happy reversal of Scott’s plight, the film ends with our hero accepting his fate, delivering a soliloquy of existentialism as he shrinks into the completely uncharted frontier of a sub-atomic existence.

.” Directed by Joel Schumacher (the man who gave Batman nipples), the story’s turned into a so-so comedy with only slightly better effects and a happier ending that paves the way for a sequel (that never came). “ISM” is slated to be redone yet again (reportedly to star Eddie Murphy directed by Keenan Ivory Wayans) no doubt with an emphasis on impressive (yet tedious) digital effects and no doubt some fart jokes. But we’ll be shocked if there’s anything in the screenplay that’s half as mind-bending as the original’s ending.

A fresh twist to the teeny-peeps plot came in the 1966 film, “Fantastic Voyage

.” It’s the tale of a team of physicians and scientists who, along with their submarine, the Proteus, are all shrunken small enough to be injected into a Russian scientist in order to destroy the inoperable blood clot on his brain! Surging through the comatose man’s bloodstream, the crew of the Proteus must contend with the dangerous turbulence of a beating heart, infection-hunting white blood cells and a traitor in their midst (not to mention the distraction of surgical assistant Raquel Welch in a white bikini). The movie inspired a 1968 Saturday morning cartoon series where a secret team of government agents shrunk to microscopic size to do espionage work!

Also on the small screen that same year, ABC’s “Land of the Giants

” isn’t exactly about shrunken people (see the title), but it mines the same premise. In the show, the crew and passengers of a sub-orbital plane are pulled through a space warp into a world of beings twelve times their size. While trying to repair the ship and return to Earth, the seven stranded beings were constantly beset by huge insects, animals, and worst of all, pesky kids thinking they were toys!

” puts a family friendly Disney spin on the concept with a bunch of kids accidentally made miniscule by a device invented by wacky scientist dad,Wayne Szalinski (Rick Moranis). Despite being a mostly predictable rehash of previous cinematic lilliputian obstacles (insects and tools become deadly adversaries), the movie was a huge hit, inspiring sequels, a theme park ride and a TV show in which nothing ever shrank (except ratings).