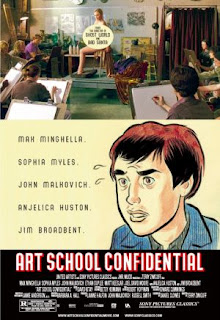 We’re in the midst of what’s been dubbed the Golden Age of Comic Book Movies, with talented directors like Christopher Nolan (“Memento

”) and Bryan Singer (“The Usual Suspects

”) helming big budget versions of funnybook superheroes. But many people don’t realize that some highly acclaimed NON-genre films of the past decade or so have likewise been based on comics.... they just don’t star costumed do-gooders. In honor of “Art School Confidential

” (the second film by Terry Zwigoff to adapt pages from the Fantagraphics comic book, Eightball

Terry Zwigoff’s first cinematic dip into the alt-comix world was the 1994 biopic, “Crumb

,” a searingly personal portrait of legendary underground cartoonist R. Crumb. In 2001, Zwigoff directed an adaptation of a work by one of Crumb’s true heirs.

Based on a serial from Dan Clowes’ Eightball

” tells the tale of Enid (Thora Birch), a disaffected outsider struggling to figure out life after high school. She feels a growing distance from her only friend Rebecca (Scarlett Johansson), who slips into a mundane “normal” life of retailing and renting. On top of that, Enid fumbles with a crush on the cute boy at the convenience store and her well meaning, but clueless father is reuniting with a despised ex-girlfriend. When a mean prank twists into a complicated friendship with a middle aged, alienated record collector named Seymour (Steve Buscemi), Enid is further forced to take a hard look at the shifting but omnipresent expectations levelled upon us by society, family and friends. Peppered with genius bits of snark and irony, “Ghost World,” with its plethora of unpleasant characters and metaphorically ambiguous ending, is the perfect film for anyone (teenage or adult) who can’t relate to the cinematic worlds of John Hughes or Amy Heckerling.

2002 saw the release of “Road to Perdition

”), the film’s period setting, languorous pace and muted color scheme seems antithetical to what audiences usually think of “comic book movies,” which may be why many people are shocked to discover the film’s source. 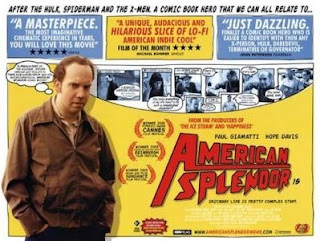 ” may not be about a superhero (although Superman, Green Lantern and Batman make a cameo in the opening), but the movie wears its comic book origins on its sleeve in a truly unique way. The story of Cleveland file clerk / misanthrope Harvey Pekar is told in a combination of dramatization (with the always great Paul Giamatti as Harvey), documentary and animated recreations of excerpts from Pekar’s autobiographical comic books

. This sometimes overlapping patchwork structure would seem on paper (ha) difficult to make work, but directors Shari Springer-Berman and Robert Pulcinin’s film flows beautifully and may be the most affecting comic book adaptation ever (all due respect to “The Punisher”).

The term “comic book violence” is usually used to indicate brutality without consequence; People survive explosions, gunfights and massive beatings with barely a scratch. Conversely, those who inflict harm on others mostly do so casually and with impunity. So it’s ironic that last year’s “A History of Violence

,” an intensely harrowing look at its impact and effects, is based on a 1997 graphic novel

by John Wagner (co-creator of Judge Dredd) and Vince Locke.

When small town family man Nick Stall (Viggo Mortenson) is forced to kill two men attempting to rob his diner, it brings a storm of unwanted publicity. Soon, Nick and his family find themselves terrorized by some black suited gangsters from back east. It turns out “Nick” used to be “Joey Cusack,” a vicious Philadelphia mob enforcer who left town and crafted a new identity for himself decades earlier (completely unbeknownst to his subsequent family). Suddenly, Nick / Joey has to fight (figuratively and literally) to hang on to the life he’s created for himself, and it gets ugly. 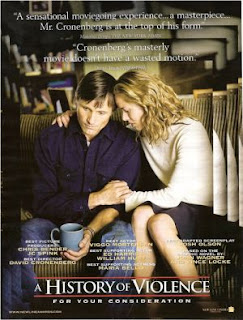 Director David Cronenberg is known for unsettling imagery, from the exploding heads of “Scanners

” (1996). But with “A History of Violence,” Cronenberg forces the audience to confront our morbid fascination with seeing others get hurt. The visceral, shocking results of the violent acts in the film may be the kind of thing we WANT to see in a movie... but by showing how those actions truly and deeply affect the characters involved (on both sides), they’re given far, far more weight than the body count in, for example, “The Matrix.” This often-misunderstood and underrated film is one of those rare pieces of art that’s impossible to shake off. A masterpiece.

YES, you heard us! A comic book movie! A masterpiece! Of course, we’d use the same term to describe 1978’s “Superman: the Movie

.” If the stigma that used to be ascribed to comic books IS finally fading, then perhaps we’ll see more non-genre adaptations. Cameras are currently rolling on “300

,” based on the Frank Miller (“The Dark Knight Returns,” “Sin City”) graphic novel

about the ancient Greek Battle of Thermopylae.

But there are lots of untapped comics that would make great movies... The seminal graphic novels of Will Eisner

” tales from “Love and Rockets