The internet phenomenon “Snakes on a Plane

by “Dracula” creator Bram Stoker, a gigantic pagan snake god that covets the blood of young virgins is resurrected at an English country estate overseen by an immortal snake woman who uses large horns to test the virginity.... oh, never mind. Let’s just say that “Lair of the White Worm” has to be seen to be believed and while its snakes aren’t exactly frightening, they are indeed memorable.

” (1981)
There’s only one thing that scares dashing archaeologist Indiana Jones (Harrison Ford)... and it ain’t chilled monkey brains. Indy’s fear of snakes comes to haunt him in his first adventure as his search for the Ark of the Covenant leads him into the cavernous Egyptian Well of Souls, teeming with thousands of slithering serpents. “Why did it have to be snakes?” laments Indy as the entire audience lifts its feet off the floor. 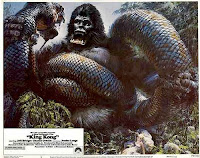 8) The Dino-Snake in “King Kong

” (1976)
The much-maligned 1976 version of “Kong” features a battle between the big ape and a monstrous dinosaur-sized serpent that’s about as believable as the guy in the monkey suit (meaning: Not). Even when Kong grabs the giant toy snake’s jaws and rips him in half, it’s not quite gross enough to cause true shudders. So why did it make our list? Because the entire scene brings to mind Bela Lugosi’s wrestling match with the rubber octopus in Ed Wood’s “Bride of the Monster

” (1982)
In addition to frightening and controlling rodent populations, snakes also make fine accessories. In Ridley Scott's bleak vision of the future, Rick Deckard (Harrison Ford) finds a scale in a bathtub. Thinking it's a fish scale, he brings it on down to the local Cambodian fish-maker, who informs the blade runner that it’s "Not fish. SNAKE scale.” This leads Deckard to the Snake Pit, a seedy nightclub throbbing with opium-smokers, strangely hot women, intoxicated men and strip teasers. There, he finds Zhora, a replicant he'd been ordered to “retire.” She's onstage. And she’s naked, except for some body paint, sequins and, oh yeah, a burmese python.

6) Eat your blood-orchids so you’ll grow up big and strong, like in “Anacondas: The Hunt for the Blood Orchid

” did well enough to warrant a sequel, the filmmakers needed to up the ante a bit. So, in place of a “normal” sized Eunectus Murinus, “Blood Orchid” features a 70-foot long Anaconda, capable of swallowing a jungle-traipsing pharmaceutical researcher in one chomp. The movie (both of ‘em, but especially “Blood Orchid”) is the essence of cheezy, CGI-fueled predictability, but doesn’t everyone need a little cheez in their diet? 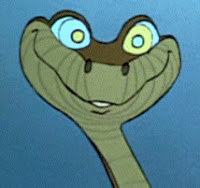 ” (1967)
Kaa the python is just one of a gaggle of colorful creatures that Mowgli encounters on his journey to man’s tribe in the 1967 Disney version of Rudyard Kipling’s story. As Mowgli’s panther escort Bagheera sleeps, Kaa wraps his body around the young boy, but his hypnotic voice has a familiar, not at all dangerous ring to it... why, this snake can’t hurt anyone! He’s voiced by Sterling Holloway, the man who also was the voice of Winnie the Pooh! Oh, bother.

” (1994)
From the opening shot of a rattlesnake to tattoos, serpent-wedding rings and the pharmacist’s Caduceus, snake imagery abounds in Quentin Tarantino and Oliver Stone’s polarizing take on violence and the media. Out of the 52 people killed by Mickey (Woody Harrelson) and Mallory (Juliette Lewis) Knox, they only feel remorse over the kind old Navajo Indian who takes them in, only to be shot by Mickey upon waking from an invoked dream of the abuse he suffered throughout his life. As the Knoxes run from their crime, they stumble into a field of rattlesnakes and are bitten repeatedly. The metaphor is about as subtle as the rest of the film, but *brrrrrrr* it works!

3) The snake-lined coffin in “Live and Let Die

” (1973)
Roger Moore’s first outing as James Bond, “Live and Let Die” feels like an awkward adolescence for the long-running franchise. The emphasis on humor, the absence of gadget-master Q, a rather mundane drug story and an American setting all felt a bit off for the swanky secret agent. But the voodoo theme allows for a few creepy snake moments, one when 007 dispatches a viper with a hairspray flame-thrower, but most notably when the evil Baron Samedi (Geoffrey Holder) is clobbered by Bond into a purple-lined coffin teeming with poisonous snakes.

”
While each member of the Deadly Viper Assassination Squad has their own serpentine nom de plume in Quentin Tarantino’s “Kill Bill” movies, the only literal snake in either film is the Black Mamba that Elle (Daryl Hannah) hides in Bud’s suitcase full of cash. As the bitten Bud (Michael Madsen) writhes on the floor in dying agony, Elle gives some background information on the deadly snake, impressed by the gargantuan (such a good word) amount of venom that can be delivered in a single bite. But what Elle fails to realize is that her former teammate code-named Black Mamba, Beatrix / the Bride (Uma Thurman) is about to smash into Bud’s trailer and wreak some sinister barefoot vengeance of her own (all while the snake slithers free!).

” (1973)
Aside from having a title even better than “Snakes on a Plane,” “Sssssss” is a total hoot of a B-movie from top to bottom. Strother Martin plays Dr. Stoner (no, really), a scientist who believes that the only way mankind can survive impending worldwide disaster (both natural and man made) is by evolving into reptiles. Unsuspecting lab assistant David Blake (Dirk Benedict of “Battlestar Galactica

”) is Stoner’s latest guinea pig, er, serpent, thinking that the injections he’s receiving are anti-venom. But as David begins growing scales and an aversion to mongooses, he realizes otherwise. Featuring an utterly awesome, disturbing ending (even by today’s standards), the mostly obscure “Sssssss” is wholly deserving of an update / remake (may we suggest David Cronenberg, who did such a fantastic job with “The Fly

Of course, there are hundreds more snakey sections of movies like “Harry Potter and the Chamber of Secrets