Pearl Harbor. Challenger. Columbine. 9/11. Words and numbers that instantly conjure indelibly burned images of tragedy in the hearts and minds of those who bore witness as well as the friends and families of their victims.

” are taking a back seat to the discussion as to whether it should’ve been made in the first place. Does dramatizing real life tragedy help heal wounds or is it merely exploitation?

For millions of Americans who were born in the former half of the 20th Century, their defining moment was the Japanese attack on Pearl Harbor on Dec. 7, 1941, an act which finally drew the United States into World War II. 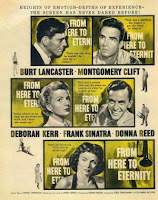 Pearl Harbor was arguably the loudest rallying cry this country has ever seen, but aside from propaganda films like John Ford’s government-edited “December 7

.” Still, that melodrama is mostly about the struggles of a handful of servicemen stationed in Hawaii in the days leading up to the attack and how their personal problems suddenly took a back seat to war.

When “From Here to Eternity” hit theaters in 1953, WWII was still fresh in America’s minds, and many veterans and their families probably wouldn’t have been too accepting of any movie that tried to humanize the kamikaze pilots who perpetrated the assault. By 1970, audiences were more willing to look at both sides of the battle.

” was a two and a half hour, $25 million dollar epic (huge in that day) that, for the first time, depicted the anxiety-fueled Japanese mission from THEIR perspective as well as the mistakes the US military made in detecting and defending against the attack. It’s hard to imagine such a non-propagandist movie being made while the conflict was ongoing.

But time can have a dulling effect on the impact of historical events. In Michael Bay’s “Pearl Harbor

” (2001), the events of December 7th are mere backdrop to soap opera, the violence and destruction diminished to plot-driving thrill ride level, with bomb’s-eye-view explosions and gunfire designed to elicit Oooh!s from teenagers. Most critics found the candy-coated piffle offensive in its exploitation of one of the most tragic days in American history.

When the Space Shuttle Challenger disintegrated shortly after liftoff on January 28, 1986, the disaster was amplified by the death of school teacher Christa McAuliffe, who was going to beam a presentation from space to schools across the nation. Meanwhile, the marketing execs at 20th Century Fox had a problem. “Space Camp

,” a film about a group of teenagers and their female instructor accidentally sent into space was set to premiere that summer. Considering that the malfunction of the shuttle in the movie had a parallel (albeit with a happy ending) to what caused the destruction of the Challenger, it’s amazing the movie was released at all. Fox pushed the release back to Autumn, hoping for either a short memory on the part of the public or that people would view “Space Camp” as a tribute to the memory of the lost astronauts. Neither scenario came to pass and the film quickly became a sad, ironic footnote to an American tragedy.

But “Space Camp” is an example of coincidence, as opposed to when a movie intentionally adapts a horrific real life incident. 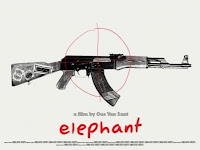 ,” is based loosely on the 1999 Columbine High School massacre. Told in a non-linear, non-narrative style, the movie follows a number of high school students as they meander through a typical, purportedly aimless day in a way that (not coincidentally) resembles the visual motif of a video game. That structure remains as two of the students begin calmly and methodically killing students and teachers, underscoring the horrific depths of nihilism to which humans can succumb as well as commenting on a culture that, some would say, shoulders much of the blame.

Films have always used historical events (whether ancient or recent) as springboards, whether the tales are apocryphal or not. And art can (and should) be potent enough to tackle any subject, no matter how difficult. But when the wounds of an actual dramatized incident have yet to heal, you can’t help but contemplate a movie’s effect on the real life victims of the story.

Imagine if you were a student at Columbine in 1999... or Red Lake High in 2005... or any school where gun violence has taken a life. How would it feel to sit and watch actors pretending to be your friends pretending to fall as pretend bullets trigger squibs of pretend blood?

It took sixty years for Pearl Harbor to be trivialized in a big budget film. It’s only taken five for Hollywood to start dramatizing (if not trivializing) a day that most of us can still see as clearly as if it happened yesterday. In the days and weeks that initially followed September 11, 2001, much lip service was given to the notion that the movie industry was forever changed by the events of the day. The Arnold Schwarzenegger terrorist thriller, “Collateral Damage

” was bumped from planned release, and showbiz pundits wondered if moviegoers would ever casually accept mass destruction as entertainment again. Cynics predicted that this new restraint would be short-lived.

The cynics were right, and soon New York and other major cities were again being destroyed in movies, most notably in “The Day After Tomorrow

” (2004). Still, despite too many comments that 9/11 looked “just like a movie,” the idea of actual film dramatizations of the day were impossible to imagine right away. To some, they still are.

The “Too Soon?” question first arose earlier this year with “United 93

,” a “docudrama” about the highjacked plane that missed its intended Washington target on 9/11 due to the intervention of its passengers. While many critics lauded the film, we must say that we found it both painful and pointless. The uncomfortable “acting” of some of the actual participants of the events of the day, the pure speculation as to much of what happened on the flight and the predetermined ending made the movie ultimately feel exploitative. The movie manipulates audience anxiety and anger over the events of that day to the point of making the viewer WANT to see the murder of the terrorists (which we don’t know occurred) and the taking back of the cockpit (which didn’t actually happen). When the film ended a split second before the plane crashes in that Shanksville, PA field, we felt guilty for having seen it.

Dealing with personal tragedy is something we all must do at some point in our lives. The reflective nature of pop culture inevitably forces us to relive whatever pain we’ve endured. If your father died of a heart attack, it’s going to hurt any time you see a movie character clutch their chest and fall to the ground. It’s not only impractical, it’s politically correct to the extreme to expect that any film should take the feelings of every potential patron into consideration.

But with a collective tragedy like 9/11, does pop culture need to be more careful? Perhaps “World Trade Center” would feel less crass had it been given a more poetic title, something underscoring the theme of courage and survival (too bad “The Lord of the Rings” already claimed “Two Towers,” which could’ve served as a metaphor for the courage of the WTC cops while retaining that all-important immediate name recognition). And don’t get us started on the use of Coldplay music in its advertising and the WTC MySpace page....

Once again, subjectivity reigns. For some, September 11th will always be far too painful to see it turned into popular culture, regardless of the respect and care given by the creators. For others, the experience of re-living the day, particularly communally, can help in the healing process. And, hard as it is to accept, there are still more for whom “World Trade Center” is something they’ll go see simply because they like to see stuff blow up. The motivations of the filmmakers become irrelevant once you’re sitting in the theater.