Truth, Justice and the Fanatical Way part 3: The Where, the When and the With Whom 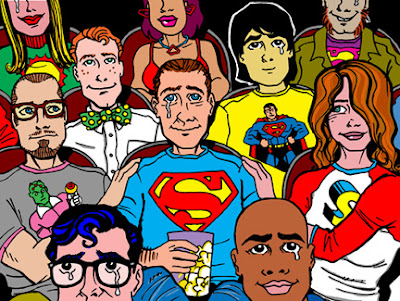 now just one month away, it’s time for fanboys around the globe to figure out three things: When to see it, where and with whom. For most, the first two are no-brainers: Right away and on the biggest screen possible. It’s the “with whom” that can sometimes be tricky.

Comic book fans have been stereotyped (not entirely without basis) as anti-social, isolated in dark, climate-controlled fortresses of solitude, obsessing over collectibles that must remain in mint condition, sometimes to the extreme of disuse (more on that in part 4). What socialization exists often takes place among leagues of like-minded folk, people who know that “Shazam” is not Captain Marvel, but the wizard who gave Billy Batson his powers. Most fanboys are not clubbing on a Friday night; They’d never get past the velvet rope.

The irony is, millions of people (including those snobby nightclub doormen) who’d never set foot in a comic store will eagerly plunk down ten bucks to see a superhero movie. Nothing mainstreams a comic book more than a big budget Hollywood adaptation, which be frustrating for fanboys. They feel proprietary of “their” characters, reluctant to share Spider-Man with people who don’t know there’s a hyphen in the name and that MJ calling Peter Parker “Tiger” has historical context.

As such, when an event movie like Superman Returns comes around, many fans will bond together in protective groups, like packs of deer, to see the film the second it comes out. The internet has made it simple. On Superman sites like Bluetights.net, there’s forum after forum of people making plans to meet for the premiere in every city from Seattle to Pittsburgh to Rio de Janeiro to Cape Town, South Africa. Hordes of fanboys will be lining up, maybe even days in advance of June 30th, thus ensuring media coverage, usually of a mocking tone. Thank George Lucas for that.

While arguably the most mainstream of geek passions, Star Wars

films were all marked by news stories about obsessive fans a little TOO hyped. There’s a certain amount of derision to be expected when one chooses to put on a Darth Vader costume and sit outside a theater in a lawn chair for a week in advance of a film’s premiere (the phrase, “Get a life” springs to mind).

Unlike in Star Wars, however, there aren’t a lot of costumes for the Superfan to don while waiting in line on June 30th (or any day leading up). No doubt many S-shield shirts

will be worn, but other than that, what’s a supreme fanboy to do? In lieu of a Stormtrooper helmet, perhaps one could shave his (or her) head, Lex Luthor style! Or wear a Jimmy Olsen

bow tie! Myself, I plan to wear red underwear (who knows, perhaps even on the outside).

As for the “Where,” fans in big cities will have the option of seeing the movie not just on a nice big screen, but the biggest screen. And in 3-D. Superman Returns is the first Hollywood feature to use IMAX conversion technology to turn about 20 minutes of the movie into what’s touted as “immersive cinematic 3D.” While I’m all for seeing SR on a big screen, I think that for my first viewing, I’m gonna stick to a more traditional theater. I’m going to be so focused on letting go of my preconceptions and just relaxing that I don’t want the movie itself to be a distraction from the story and the characters. I’ll see it in IMAX later on (hoping that I will want to see it more than once).

But back to the “With Whom.”

Steve Leach, a York PA graphic designer who spends much of his time and income collecting Superman stuff usually prefers to see blockbuster films after the hype has died down and the crowds have thinned, noting “people act like they’re watching a DVD in their living room and have no regard for anyone else, and paying $9 for the privilege of sitting in a crowded theater full of yammering nincompoops is something I just don’t do very often anymore.” But he’s making an exception for Superman Returns, hoping “if I see it on the first night, I will be in a theater full of fellow nerds.”

The communal experience of filmgoing is, despite the dangers of yammering nincompoops,” one of its biggest thrills, especially for a highly-anticipated, spectacle-laden film like Superman Returns. The Venture Bros.

creator Chris McCulloch admits to being less of a fanboy than he was in his youth, except when it comes to comic book MOVIES. Chris’ plans for seeing Superman Returns are just like they were for every other big superhero flick: “Midnight showing, opening night, with geeky friends. Always. I like to be the first to see it, and the crowd is always all pumped up so it makes it more of an event, more fun.”

As with the Star Wars prequels, nostalgia seems to be fueling anticipation for Superman Returns. New York photographer and Superman fan Gary Ashley has a Florida friend considering a trip to Manhattan based around going to see the film with Gary, all because they saw Richard Donner’s Superman: the Movie together as kids. I can relate. My memory of seeing the first Superman is vivid: Friday, December 15, 1978, the Wonderland Cinema in Lancaster PA, with my Dad and my best friend Nathan. The show was packed. And when Christopher Reeve first appeared onscreen, clad in the costume, taking off from the Fortress of Solitude and swooping past the screen in the film’s first majestic flying shot, Nathan and I both leapt in our seats, exclaiming, “That was so cool!!!!” 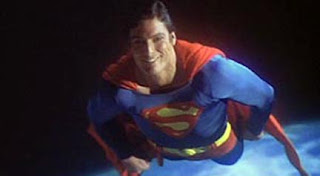 . If, as many have surmised, Superman Returns ends with Brandon Routh recreating Reeve’s final fourth-wall-breaking smile at the audience as he flies off-screen, there are gonna be a lot of fanboy tears flowing during the end credits. Including mine.

In all honesty, I’ll be surprised if I DON’T cry at the end of Superman Returns. I’ve been awaiting the character’s big screen revival for many years, even if I was dreading some of the films that almost happened (which we’ll deal with in part 5). If Bryan Singer’s done a good job, if the movie successfully captures what I love about Superman in a huge, entertaining, rousing manner, I’ll probably weep tears of joy and relief. Conversely, if the movie turns out to be an overblown disappointment, sadness may well up in my geeky ducts.

As such, my viewing priority has less to do with what theater or when, but with whom. I’ll need to be surrounded by sympathetic friends, ones who know me well enough to not judge (or be freaked out by) my perhaps-emotional response to the movie. I’ve got the roster. Some of them are actually almost as excited.... er, cautiously optimistic as I am. As to whether June 30, 2006 becomes as indelibly burned in my brain as December 15, 1978... only time will tell.