When horror and comedy collide! Or, It's a thin line between HA HEE and AAH EEE!

Like all art, Humor and Horror are subjective. Perhaps you thought “Napoleon Dynamite

” was hilarious and “Saw

” was terrifying. Let’s just say we didn’t. So, successfully melding the two as film genre is a tricky proposition. Granted, “Scary Movie 4

,” the latest installment of the successful series isn’t a true hybrid, but rather (like “Beetlejuice

” and the seminal “Abbott and Costello Meet Frankenstein

”) a comedy set in the horror milieu.

But our instinctual reactions to horror and comedy are markedly similar. They elicit primal emotions, bring forth uncontrollable physical responses. We laugh, we scream, we jump, sometimes on top of each other. Which is why the movies that truly, seamlessly blend terror and titters are some of the most memorable films of all.

” isn’t a comedy / horror hybrid, it is that mixture that not only defines Jack Nicholson's performance as haunted innkeeper Jack Torrance, it’s what makes it pitch-perfect. Jack spouts smart-ass one liners while threatening to bash his wife Wendy’s (Shelley Duvall) brains in and chasing his son Danny with an axe. We’re simultaneously... and EQUALLY amused and horrified. Jack is arguably (with apologies to Norman Bates

) the most likable homicidal maniac in movie history, pulling us into the story, adding resonance to the tragedy. 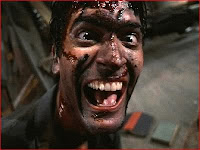 The see-saw effect of screaming one second, laughing the next allows the viewer some relief, paving the way for bigger shocks than the relentless tension of straight horror. Witness the “Evil Dead

” series, the benchmark against which all comedic terrors should be judged. Starting with the low-budget “Evil Dead” in 1981, continuing in 1987’s “Evil Dead II

,” director Sam Raimi’s tale of good-vs-undead evil features gore and violence so over the top that it becomes comical. With with a knowingly campy performance by Bruce Campbell

as the chainsaw wielding hero Ash and Raimi’s kinetic direction, the films are the bastard offspring of George Romero and the Three Stooges

... and we mean that as a high compliment.

Zombie films do seem to traffic in morbid humor more than any other horror genre. Romero’s “Living Dead” series (especially 1978’s mall-set “Dawn of the Dead

” all rely on a head-splattering combination of laughs and screams for maximum effect.

,” a melange of a movie that manages to be scary, hilarious, joyful and moving sometimes all at once. After all, what other zombie flick culminates in a feel-good ending, with the undead finding a harmonious coexistence with the living?

,” the “true” story of an aged Elvis Presley (Bruce Campbell) and John F. Kennedy (Ossie Davis...no, really) teaming up to battle an evil Egyptian mummy who’s feasting on the souls of residents in their Texas retirement home. High Concept indeed, but Don Coscarelli’s adaptation of the Joe R. Lansdale story is grounded by some sincere performances and manages to amuse, frighten and even make a statement about society’s treatment of the elderly.

.” It’s the tale of a thousand year old phallic parasite named Aylmer (pronounced “Elmer”) that attaches itself to a New Yorker named Brian, feeding him an addictive, hallucinogenic fluid in exchange for delicious fresh human brains on which to feed. This drug allegory is full of “Oh, they did not do that!” moments, and is sure to make you check your meatballs closely the next time you dine Italian. Henenlotter also made the hybrids “Basket Case

” took the inherent silliness of 50’s movies like “I Was a Teenage Werewolf” and “I Was a Teenage Frankenstein” and mixed in some modern sexuality to craft comedy / horrors about teen vampires with raging hormones and a lust for blood. In 1989’s “Vampire’s Kiss

,” Nicolas Cage plays a yuppie who’s convinced he’s become a bloodsucker (even if he has to use fake plastic fangs to convince people). That film is best known for a scene in which Cage literally eats a live cockroach. Now THAT’S method acting.

While there’s absolutely nothing scary (or, for that matter, funny) about the 1985 Michael J. Fox comedy, “Teen Wolf

” or 87’s Jason Bateman sequel, “Teen Wolf, Too,” there’s another wolfman flick from that decade that’s maybe the greatest of all horror / comedy hybrids.

” stars David Naughton and Griffin Dunne as David and Jack, two Americans backpacking through Europe who, despite being warned away, stray onto the moors of the English countryside and are viciously attacked by a huge, monstrous wolf. Jack is killed, but David survives, waking up confused in a London hospital, where he falls in love with the beautiful nurse Alex (Jenny Agutter). But soon David is visited by his mangled, bloody, undead pal Jack, who informs him that he’s become a werewolf and must commit suicide to sever the bloodline before the next full moon. David is reluctant to believe his increasingly-rotting pal (a dangling flap of skin in one scene is particularly disconcerting) until he awakens naked one morning in a London zoo after a vicious night of lycanthropic mayhem. The movie is an absolutely brilliant, seamless mesh of black comedy and bloody terror, enhanced by a perfect soundtrack, wonderful performances, terrific (pre-CG) effects and razor sharp editing and timing. A truly awful sequel of sorts, “An American Werewolf in Paris

,” featuring none of the talent involved in “London” followed in 1997, proving that better technology doesn’t mean better movies.

As with most genre films (“Lord of the Rings

” aside), the truly tricky horror-comedy hybrid doesn’t get the respect it deserves. We happen to think that “American Werewolf in London” was a much greater achievement than “Chariots of Fire