The relative merits of flesh, latex and CGI

For those of you who came in late, “TMNT

” is an acronym for Teenage Mutant Ninja Turtles, the comic book – cartoon – action figure – movie phenomenon spawned in that most awesomely plastic of decades, the 1980s. When the Turtles last blasted across the silver screen, they were foam and latex puppets and costumes worn by little people. In the new film, they are, naturally, CGI creations. Not that anyone ever thought Michelangelo, Donatello, et al were actual flesh and shell beings, but the updated Turtles raise the question: What’s more believable? An actual, if artificial construct… or a computer generated image?

” debuted in 1933, Willis O’Brien’s startling effects of the stop-motion ape climbing the Empire State Building stunned audiences. They had simply never seen something so fantastic interacting with the everyday. To look at the film today, the stop motion animal is more quaint than terrifying, with its jerky movement and visible handprints of the manipulating animators on its fur. But for diehard fans, the original remains the quintessential Kong, despite (or, depending on your sensibilities, because of) its technical limitations.

made headlines by attempting to use an actual full size Kong robot. In the end, the 40-foot, 1.7 million dollar behemoth was stiffer than the 1933 puppet, getting a full minute of screen time. So the filmmakers ended up going with make-up / effects creator Rick Baker in a monkey suit, which looked like, well, an actor in a monkey suit (especially since he didn’t bother to stoop like an ape when he walked).

” (2005). Ostensibly an ode to the original 1933 film, Jackson’s epic was chock full of giant and/or icky movie monsters and a scarred, dinoflea-ridden, fully realized Kong (played in motion-capture by Andy Serkis). And while the film was visually dazzling, many critics felt that it was TOO much, particularly in the scenes on Skull Island, populated with dozens, nay, hundreds of digital creatures. Jackson seemed to fall victim to Lucasitis: an overwhelming inflammation of too many digital effects, culminating in a lack of focus and often leading to eyestrain or headaches and an overall lack of emotional connection. In the end, Jackson’s “Kong” did okay, but wasn’t as enthralling (nor emotional) as its inspiration. 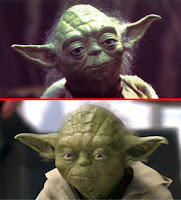 ” series, “The Empire Strikes Back

,” introduced the character of Jedi Master Yoda, brought to life by Muppets alumnus Frank Oz in the form of a highly intricate puppet. Despite sounding like a cross between Sesame Street’s Grover and Kung Fu’s Master Po, Yoda became an instantly beloved part of the Star Wars universe. It was obvious that Yoda was a puppet, but it didn’t matter. Yoda was real because, well, Yoda WAS REAL. When he reaches out and pinches Luke Skywalker’s arm to explain how the force isn’t bound by simple flesh, the interaction actually happens, to the benefit of both actor and audience.

,” Frank Oz’s participation was cut to mere voice work. Yoda was now a full CGI creation, better able to leap into the air and do (very silly looking) light saber battle with Count Dooku, but he was somehow… less believable. The limitations placed on a puppet seemed to better fit a 900 year-old green dwarf than the airy weightlessness of ones and zeroes. It’s sad to speculate that at some point, George “the Terrible Tinkerer” Lucas could go back and replace the puppet Yoda in all of the films with a CGI creation. 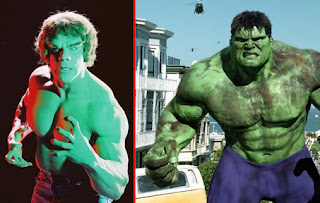 ” that the humanoid star of a movie was computer generated (no, “Casper” doesn’t count). While the general public had accepted the bodybuilt but still human Lou Ferrigno as Bill Bixby’s angry alter-ego in the “Incredible Hulk

” TV show of the 1970s, the comic book basis was in fact a far more imposing creature, a tank-sized beast that couldn’t even find pants at the Big & Tall Shop (especially not in purple). But, despite a gargantuan size, the bigger, badder movie Hulk failed to connect with an audience. A convoluted, overly serious script was primarily to blame, but could the fact that the Hulk wasn’t “real” have had something to do with it?

All of this is not to say that some movie characters shouldn’t be rendered digitally. Take Ben Grimm, aka The Thing from “Fantastic Four

.” In the Marvel Comics universe, the Thing and the Hulk are about the same size, and have gone green-toe-to-orange-toe many times. In the movies, Michael Chiklis buried under makeup just isn’t as imposing (nor as tragic) as the character needs to be. Especially considering the character’s lack of human flesh and hair (two of the hardest things to realistically animate), the Thing’s rocky form seems to beg for the CG treatment (after all, both the flamed-on Human Torch and the Silver Surfer are fully CG in the upcoming “Rise of the Silver Surfer 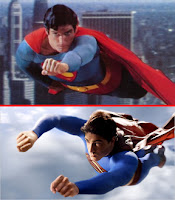 ” is in a way a curious example movie effects coming full circle. In the Superman movie serials

of the 1940s, when the Man of Steel (played by Kirk Alyn) would take flight, the live action Superman would suddenly be replaced with a crudely animated character. That obvious cartoon has very little in common with the sophisticated CGI Superman used in many flying shots in “Returns.” Still, while audiences knew that computer graphics were being used, it was the combination of those shots with actual physical effects of Brandon Routh on cables and gimbals that made it work. If you don’t know which shots are “fake” and which are “real,” it becomes easier to get lost in the sum total.

.” That movie drew audiences to the theater with promise of making you believe, for the first time, that a man could fly, and it did, with nary a computer involved.

While the claim is that today’s audiences are more “sophisticated” in expecting far more from their special effects, we’d say it’s actually something less meritorious. Today’s audiences are more cynical. We not only expect that modern effects are flawless, we demand it and anything less than 100% believable is decried as being crappy effects, regardless of how much imagination and toil was involved. Maybe modern CG updates of old characters don’t resonate as strongly because the wonder’s gone. The sad fact is, movie magic has become a thing of the past, replaced with cold movie science. Due to the catch-all answer of “with computers,” nobody ever gasps at the fantastic and asks those five words that entranced moviegoers for practically a century: “How did they DO that?”
__________________________________________________
ORIGINALLY POSTED in REWIND on MTV.COM, march 2007
Posted by Pops Gustav at 11:42 AM