Twizzling around the rink of figure skating movies

There are certain film genres that are, shall we say, more appealing to females than most males. Romantic comedies. Cinderella stories. Movies about weddings. They are what is often called the Chick Flick, an umbrella which also covers the figure skating film. The new Will Ferrell comedy, “Blades of Glory

” may well be the first figure skating movie to which guys are going to have to drag their girlfriends rather than the other way around. Strap on your blades and join us as we take a twizzle around this oft-goopy mini-genre.

In the history of figure skating, there’s only been one athlete who parlayed it into major Hollywood fame. Norwegian figure skater Sonja Henie was a 19-time Olympic / World / European skating champion when she began starring in movies with 1936’s “One in a Million.” Henie plays Greta Müller, a Swiss skater who’s discovered by an American agent and brought to the states where she skates into fame, fortune and love. Yep, it’s that simple, but the semi-biographical musical was a smash, and Henie soon became one of the highest paid actresses in Hollywood. For the next decade, she would star in nine more skating movies, culminating in 1945’s “It’s a Pleasure

Considering Henie’s success, it’s surprising there weren’t a slew of imitators. Singular-named British skater Belita was one of the few to follow in Sonja’s tracks, starting with the 1943 wartime soaper “Silver Skates

” and the 1944 skating musical, “Lady, Let’s Dance.” Both films featured the “comedy ice team” of Werner Groebli and Hans Mauch, or as they were more commonly known, Frick and Frack. We’re not making this up. 1946’s “Suspense

” was an odd mixture of skating with film noir, as a peanut vendor at an ice show comes up with the idea of having Belita jump through a hoop of knives, gets promoted to manager and begins an affair with the skater! Ah, the golden age of Hollywood.

It would be more than three decades until another movie centered around figure skating, but 1978’s “Ice Castles

” became a cheesy standard-bearer for the genre. Professional skater Lynn-Holly Johnson stars as Alexis Winston, a promising young Olympics-wannabe who is blinded in a tragic night-skating accident. But, as is always the case in films like this, spirit trumps adversity and with the help of her widowed dad, her crusty but supportive coach and her doe-eyed boyfriend Nick (Robby Benson), Lexie skates to victory (but watch out for those roses on the rink!).

Three years later, Johnson would return to the screen as another figure skater in probably the least likely showcase for the sport: a James Bond film. In 1981’s “For Your Eyes Only

,” Johnson plays Bibi Dahl, a teenage skater being sponsored by the villainous Aris Kristatos (Julian Glover). Dahl is spoiled, restless and, of course, hot for Bond (Roger Moore). In what may be an anomaly in the series, the aged 007 actually refuses the advances of the lass, proving that the secret agent actually does have some standards: no whiny teenage figure skaters.

” is a romantic comedy in which ex-hockey player Doug Dorsey (D.B. Sweeney) crosses blades with figure skater Kate Moseley (Moira Kelly) as they’re paired up to compete as a duo at the Winter Olympics. See, Kate is a spoiled prima donna who chews up partners like, well, ice and Doug is a tough jock who thinks figure skating is a joke. So, of course, they hate each other right off the bat! Gee, I wonder if all their bickering and battling will end with them discovering they love each other right before they win the gold!? The film spawned a 2006 TV-movie sequel, “The Cutting Edge: Going for the Gold

,” in which the Doug and Kate’s daughter turns out to have inherited Mom’s disposition as well as her skating ability. 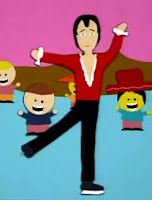 ” as Kyle, Stan and Cartman musically ponder, “What Would Brian Botano Do?” and envision the Olympic champion as skating through mountains and time itself, doing heroic battle with grizzly bears (using his flame breath), giant robots and Kublai Khan. It’s a bit more flattering than Boitano’s hyper-fey appearance in Trey Parker and Matt Stone’s short 1995 “South Park” precursor, “The Spirit of Christmas.”

,” a mockumentary centering around a regional figure skating competition and its rather unbelievable participants. Despite featuring actual skaters including Scott Hamilton, Tai Babilonia, Kristi Yamaguchi and Randy Gardner (not playing themselves), the satire misses the mark completely, full of tired fat jokes and unfunny mugging, compounded by factual errors about the sport itself. “Seinfeld” alum Jason Alexander must’ve lost a bet to star in this turkey as the all-seeing Zamboni Phil.

” (no “The”) is as much an ode to math as to the sport of skating. “Buffy the Vampire Slayer” little sister Michelle Trachtenberg stars as Casey Carlyle, a nerdy teenage physics whiz who comes up with a formula to jump higher and spin faster, and before you can say Phenomenology, Casey’s skipped years of training, landed in regional competition and transformed into a beautiful swan! Of course, there are also fights with Mom, blonde rivalries and a cute boy to round everything out. “Ice Princess” is one of those movies that isn’t necessarily BAD, but begs for its own rating: OG-15 (Only 15 year old girls will be permitted to see this film).

Perhaps if “Blades of Glory” is a hit, figure skating will crossover into other genres outside of the Chick-Flick realm. We can see it now… a maniacal ex-skater who feels he was unfairly judged out of the winter Olympics uses razor sharp skates to exact bloody revenge on those who wronged him in Eli Roth’s DEATH SPIRAL! The Abominable Snowman becomes part of the US figure skating team and fights crime in his spare time as LUTZING YETI! And Sylvester Stallone convinces Clubber Lang to join him in a new synchronized boxing match on skates in ROCKY ON ICE!