10 films that straddle the line between grindhouse and mainstream 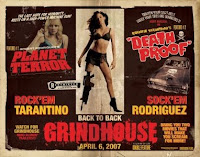 ” double feature is a loving ode to exploitation films, those low budget flicks of the past that used shocking content to lure a voyeuristic audience hungry for cheap thrills. Rather than add to the endless lists of examples of pure Grindhouse currently clogging up the internet tubes, we thought we’d count down the top ten films that (intentionally or not) straddle that fine line between mainstream cinema and the fodder of the seedy Times Square cinemas of old!

(1987)
The post-apocalyptic “Cherry 2000” tells the tale of a man obsessed with finding an exact replacement for his broken “sex machine,” the titular (no pun intended) android (Pamela Gidley). The lust-lorn Sam (David Andrews) hires a “tracker” named E. Johnson to help him get through the lawless, violent “Zone” in her Ford Mustang and find his new toy. What makes this movie such an odd stew is that it turns into an old-fashioned romance, and Johnson is played by the highly-unthreatening Melanie Griffith, a mom-friendly Mad Maxine who seems about as uncomfortable toting a giant gun as she does amidst the Hasidic Jews in 1992’s “A Stranger Among Us

(1995)
Screenwriter Joe Eszterhas was paid a phenomenal $3.7 million to write this soft-porn tale of a small town girl who comes to Las Vegas and lap-dances her way to the top. Starring former TV teen Elizabeth Berkley as the usually-naked Nomi Malone, the NC-17 film (directed by Paul Verhoeven, the man behind “Basic Instinct

”) was critically drubbed and failed to find an audience… until it was released on video and its broad, unintentional camp began to develop a cult following. The film’s studio, MGM retroactively began marketing the movie as an intentional goof, playing up its reputation as one of the worst films ever made as a selling point.

(2003)
Like “Grindhouse,” Rob Zombie’s first foray into film is an intentional nod to the gory exploitative horror films of the 1970s. So we have to wonder… when Universal pictures gave a green light to the project, what were they expecting… “Return to Witch Mountain?” After the blood, guts and flesh earned the movie an NC-17 in 2000, the studio dropped out, and it took three years for the film to find a distributor, after which many critics either panned or ignored “House” not on its own merits so much as the genre it ostensibly celebrates. Buncha wusses. 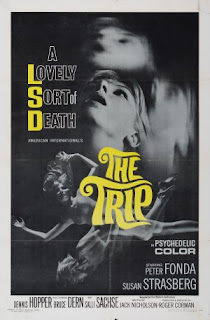 (1967)
“The Trip” is a typically low-budget release from American International Pictures, but it’s the talent involved that makes it stand out. The movie tells of Paul Groves, a man who seeks to escape the pain of his horrible divorce by taking an LSD trip, viscerally depicted for the bulk of the film. Check out the star quality of the players: Peter Fonda stars as Groves alongside Dennis Hopper (two years before the two made “Easy Rider

”), Susan Strasberg and Peter Bogdonavich, in a screenplay written by none other than Jack Nicholson. True, most of those names didn’t carry the weight they do today, and it’s not like it’s subject matter they would later avoid, but the confluence of all that star wattage gives this movie an unexpected retroactive weight.

(1990)
Director David Lynch has always enjoyed pushing envelopes, but with 1990’s “Wild at Heart,” some felt that he had finally gone too far. The twisted road movie follows the recently paroled Sailor (Nicolas Cage) and his lady love Lula (Laura Dern), on the lam from Lula’s evil mother Marietta (Diane Ladd, Dern’s actual mom) who has set numerous bounties on the head of the boy who took her baby. Mysterious toilet fluids, squishy skull holes, puddles of vomit, gloopy decapitation by shotgun, and some really ugly teeth are only some of the disturbing imagery that caused many to cry foul when the movie won the Palme d’Or at the Cannes Film Festival. In fact, the guy who wrote the #1 film on our list called “Wild at Heart” “repulsive and manipulating.”

, an anthology film that fits on our list for one infamous reason. In one story, Vic Morrow plays a bigot who is transported to various situations where he’s the victim of racism. During the filming of a scene in which Morrow finds himself in the midst of the conflict in Viet Nam, carrying two small children through a lake while US helicopters raze their village, all three actors were killed when an explosion caused a chopper to crash on top of them. Despite the fact that the children were working illegally, nobody was convicted of any wrongdoing in the incident. While the shots of Morrow and the children being killed were obviously not used, “Twilight Zone: the Movie” nonetheless retains a discomfiting air of being the only major studio snuff film.

(1974)
1974’s “Death Wish” played off of the ever-growing fear of urban crime. Based on a book by Brian Garfield, the movie stars tough guy Charles Bronson as Paul Kersey, a man who gets a gun and goes on a vengeful vigilante spree after criminals kill his wife and rape his daughter. The movie was (and remains) completely polarizing, with some critics unable to look past the film’s right wing politics. It is interesting to imagine how the movie would’ve played if the far less threatening Jack Lemmon had played Kersey, as was once planned. 3) The Beat Generation (1959)
MGM released this noirish cops vs. rapist tale set amidst the seedy Beatnik culture of the late ‘50s, but it’s about as hip (or hep) as your drunk uncle doing karaoke to Billy Joel. Despite the presence of the va-va-voomy Mamie Van Doren, a poetry-spouting Vampira and Louis Armstrong (who, while undeniably cool, was never really a part of the Bop scene), the movie can’t hide its distaste for “these kids today” and is remarkably bleak. The New York Times called the film “excruciating and tasteless,” but the critic reveals his prejudice against the scene and its music, patronizingly writing about beatniks “writhing to ‘noise’ records” in a coffee house “that seems more like a looney bin.”

(1979)
“The Warriors” has gained such a cult film reputation that most people probably don’t even realize it was produced by a major studio (Paramount). Taking inspiration from both vintage gang flicks like 1957’s “The Delinquents” and the more glamorous “West Side Story

,” mixed with the gritty realism of the setting of late ‘70s New York, director Walter Hill created the ultimate gang movie as the “Armies of the Night” face off against the cops and each other. True, the violence is toned down from Sol Yurick’s original novel

, and the matching uniforms (designed to make it easier for viewers to tell the various gangs apart) add a cartoony element to the film, but the film’s stlylized action was effective enough that the movie was blamed for inciting actual incidents of gang violence. 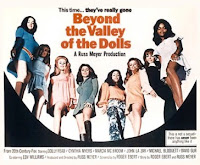 1) Beyond the Valley of the Dolls

(1970)
Boob-King Russ Meyer’s first stab at mainstream moviemaking boasts a screenplay by none other than thumbslinging film critic Roger Ebert. The movie (only nominally a sequel to 1967’s soapy “Valley of the Dolls

”) is the story of the Carrie Nations, an all-girl band that moves to Los Angeles and gets sucked into a world of sex, drugs, depravity and death when they hook up with the dangerous, flamboyant record producer “Z-Man” (John LaZar). Satirizing Hollywood, conventional attitudes about sex, the music business and even the Manson murders, the film received an X rating and sent shockwaves through its studio, 20th Century Fox. It has since gone on to become one of the quintessential cult films, inspiring everything from bands such as the New York Dolls

and My Life with the Thrill Kill Kult

to the “Austin Powers

” films. Check it out and see if you don’t find yourself screaming, “This is my happening, and it freaks me out!!!”

And then, of course, there’s Mel Gibson’s “The Passion of the Christ