” tells the story of Edie Sedgwick

.” Sienna Miller plays the doe-eyed waif Edie, which is logical casting. The far trickier role is in the hands of Guy Pearce, who has to evoke one of the most celebrated, yet enigmatic artists in history: Andy Warhol

Warhol’s famously childlike persona, detached air and fey mannerisms make him very difficult to play without doing a seeming caricature. As with Elvis Presley, Truman Capote and John F. Kennedy, any portrayal runs the risk of coming across as an impression more than a performance. So how have other actors stacked up? 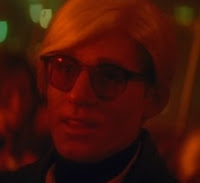 ” (1991) features another of those hard-to-do real-life roles in the lead character of Jim Morrison. While Val Kilmer’s uncanny channeling of the Lizard King was spot-on, the same can’t be said of Crispin Glover’s interpretation of the original King of Pop.

Glover is notoriously quirky, both in real life and in most of the roles he chooses (“Back to the Future

” notwithstanding). But his Warhol feels like a Halloween costume, more a reflection of the actor’s own sensibility than an attempt to capture the essence of the artist. In the end, it’s stunt casting that’s just distracting. Thankfully, it’s just a small cameo.

The next year, Bob Swain would play Warhol again alongside a faux Morrison as well as Elvis Presley, Greta Garbo, James Dean and Marilyn Monroe in Robert Zemeckis’ “Death Becomes Her

.” But the film’s party of the presumed-dead is broad satire that doesn’t even pretend to be a nuanced portrait of any of those icons.

While someone named “Edge” (no, not that one) played Andy Warhol in a 1996 B-Horror flick called “The Vampyre Wars,” that movie seems to have been overshadowed by two other films that same year that prominently featured the artist. 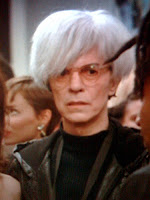 ,” a bio-pic about the homeless graffiti artist turned art world superstar Jean-Michel Basquiat. Set in the 1980s, it depicts the last era of Warhol’s Factory. The always-great Jeffrey Wright is mesmerizing in the title role alongside a terrific cast that includes Gary Oldman, Dennis Hopper, Benicio del Toro, Christopher Walken and Claire Forlani as both actual figures and so-called “composites” of the downtown NYC art scene. And playing the part of Basquiat’s friend and mentor (our subject today) is David Bowie.

The contrast between the comparably naive and insular pop era of the 1960s with the excess-laden 1980s, when art became as much commodity as expression runs as a sad undercurrent through this underrated film. This Andy Warhol seems more tired than detached, inspired by the young artists he helps bring to the fore, but cognizant of the fact that his best work is behind him.

Bowie’s Warhol does retain the charming (if faux) naiveté and has a warmth that’s missing from most interpretations, but the problem with the portrayal is that you have someone almost as iconic as Warhol playing Warhol. You never stop chuckling at the image of David Bowie wearing a big white Warhol wig. The effect is as jarring as it may have been if Burt Reynolds or Robert Redford had actually accepted the lead role in 1978’s “Superman.”

But Bowie’s performance was also overshadowed by perhaps the best depiction of Warhol put to screen in that same year, one by a relative unknown.

” dramatizes the life of Valerie Solanis (Lily Taylor), a 1960s Factory hanger-on whose hatred of men led her to write the “SCUM Manifesto

,” a screed calling for the extermination of the sex (SCUM is an anagram for “the Society for Cutting Up Men”). When Warhol repeatedly ignores Valerie’s pleas for him to produce her play, “Up Your Ass,” she takes it as the final affront of man vs. woman and puts a bullet in him, nearly killing the artist.

Andy is played by Jared Harris (son of Richard), an actor who’s made a career of playing characters with a tenuous connection to so-called normal life in films like “Natural Born Killers

,” in which he made the adult Will Robinson as creepy as Dr. Smith. Not only does Harris play Warhol with a believable detachment and just the right sense of bemusement, his pocked, unglamorous mug adds a physical believability that’s lacking in most movie Warhols.

” (1997). In an early scene set at the Electric Psychedelic Pussycat Swinger’s Club, the shagadelic super-spy (Mike Myers) tosses the artist a can of Campbell’s tomato soup, thus inspiring one of the most important pieces of pop art in history. 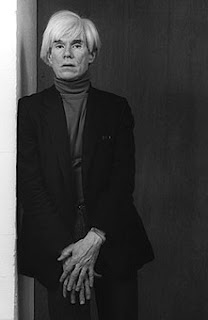 .” The lone bright spot in this apocryphal, muddled depiction of legendary New York ‘70s disco, Studio 54 is Myers’ portrayal of owner Steve Rubell. Rubell was a short, balding, pot-bellied man who tried to make himself feel better by surrounding himself with glamorous celebrities and reveling in the numerous diversions of the disco era that his power afforded him.

One of the more frustrating aspects of “54” is how it never fully captures the down and dirty debauchery, the overtly gay culture and the dominance of celebrity in that scene. A number of nightlife mainstays are seen in the film, and given Warhol’s ubiquity in that world, they couldn’t NOT show him, but again, the part (played by Sean Sullivan) is a mere cameo. Still, considering that Warhol was usually more of an observer than a participant in his world, perhaps that’s fitting.

Given how many films have been made about the satellites that orbited Warhol’s shining star for three decades, it’s somewhat surprising that nobody’s tried to make a biographical film about the man himself. Maybe Warhol was too enigmatic to try to flesh out in a two hour piece of drama (or comedy-drama). But given the artist’s passion for pop culture and embrace of so-called low art, we think he’d welcome the attempt. Of course, it would take a director with a firm grasp on the decades involved, someone with a rock esthetic and an affinity for outsiders. Someone who embraces pop culture while retaining a healthy perspective on it. Richard Linklater, are you listening?
___________________________________________________
ORIGINALLY POSTED in REWIND on MTV.COM, January 2007
Posted by Pops Gustav at 4:07 PM