” has silenced the Daniel Craig critics (note that craignotbond.com no longer exists), it’s time for the Rutger Hauer fans to cry foul

over the new remake of “The Hitcher

,” hitting theaters this week. Any time a film is remade, there are going to be purists who feel that the original is sacrosanct, but the fact is, sometimes it’s possible to take an old movie and make it better (or at least different). Here’s a list of Ten Great Remakes to prove it.

(1956)
We realize this is heresy to some, but we’ve always preferred the musical remake of “The Philadelphia Story

” to the 1940 original. Not that the first film wasn’t great, with a stellar cast including Katherine Hepburn, Cary Grant and Jimmy Stewart in the tale of an upper crust love quadrangle. But the 1956 update’s cast features the arguably equal star wattage of Grace Kelly, Bing Crosby and Frank Sinatra taking over the respective roles, reveling in a terrific musical score by Cole Porter. The final tipping point, however, is the presence of the great Louis Armstrong

as himself, adding a cool edge to the sophisticated fun.

(2003)
The whole “switching bodies” plot has anchored enough movies to create its own genre, but the original 1976 Disney film

was the first to posit what would happen if parent and child had to live each other’s lives. Barbara Harris and Jodie Foster are adorable in the original, but the times dictated a rather superficial exploration of what would be a really complex situation. In the update, we see a far more developed (and realistic) relationship between the basically good, but self-absorbed daughter (Lindsay Lohan on the cusp of debauchery) and the overwhelmed, distracted mother (Jamie Lee Curtis). It’s still a Disney film, so they can’t get TOO realistic, but both characters’ conversions feel much truer than in the original.

(1988)
Okay, let’s reiterate, not all of the films on this list are BETTER than the original. Some are successes by significantly altering the story for the times. Such is the case with this update of the classic 1950 noir

about a poisoned man’s search his own killer before he dies. Dennis Quaid plays a formerly promising novelist-turned English professor, a man with a bitter ex-wife, envious co-workers and sycophantic students, all of whom come into play as Quaid tried to solve his own murder. It’s a riveting whodunit, fast paced, witty and stylish, hampered only by a grating performance by Meg Ryan as a student who gets drawn into the drama.

(1960)
Audiences are typically more forgiving of remakes if they’re of a foreign film. While these can often be superfluous as, say, 1988’s “And God Created Woman

” (1954) and transposes it to the old west. Yul Brynner leads a ragtag group of gunfighters hired to protect a small Mexican village from a group of bandits led by a wonderfully sinister Eli Wallach. The East-becomes-West tale is a true rarity, a remake that’s become every bit as iconic as the film that inspired it. You should own both.

(2004)
A textbook example of how to keep the kernel of a great film and change it to fit the times, Jonathan Demme’s update of John Frankenheimer’s classic 1962 cold war thriller

changes the world threat from communism to corporate greed! Liev Schreiber plays Congressman Raymond Shaw, a Gulf War vet poised to become Vice-President, unknowingly under the control of his Machiavellian mother (Meryl Streep), a senator in the pocket of Manchurian Global, a huge multinational corporation with government contracts. Simple Soviet brainwashing is replaced with hi-tech implants (all the better to control the man one simple assassination away from being the leader of the free world). While the ending feels like modern compromise in contrast to the bleak climax of the original, both movies make a hell of a conspiracy double feature.

5) Invasion of the Body Snatchers

(1978)
Depending on your political leanings, the original 1956 “Invasion of the Body Snatchers

” could be viewed as either an allegory about the threat of communism or a parody of McCarthyism’s paranoia of same. Philip Kaufman’s 1978 remake retains most of the details: alien pods replicate humans, killing them and taking their place, albeit as emotionless automatons. In the new film, post-Watergate cynicism and paranoia makes it hard to trust or believe anyone, adding a humorous jab at self-help gurus and the self absorption of what would come to be dubbed “The Me Decade.” Plus, the effects are better and it’s got Leonard Nimoy!

is a philosophical psychodrama masquerading as science fiction. It’s also a bit plodding and tries too hard to NOT be “2001: A Space Odyssey

.” Steven Soderbergh’s remake puts George Clooney in the lead as Chris Kelvin, a widowed psychologist who’s sent to the Solaris space station to analyze the erratic behavior of the astronauts. Kelvin discovers that a mysterious phenomenon on the planet allows human hopes and fears to physically manifest when he awakens one morning next to his departed wife, now very much alive. Cinema snobs will profess a knee-jerk preference for the original, turning a blind eye to the languid, hypnotizing, lovely economy of the mesmerizing remake. 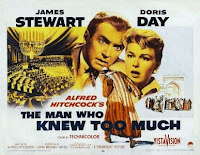 3) The Man Who Knew Too Much

(1956)
In this era of director’s cut DVDs, filmmakers often get do-overs, but in 1956, it took someone with the clout of Alfred Hitchcock to get a second version of a movie into the theaters (although the original 1934 “Man Who Knew Too Much

” was a British film while the ’56 remake was part of Hitch’s American period). Both movies tell the story of a vacationing family that gets caught up in international espionage and an assassination plot, with their child being kidnapped to ensure their cooperation. While the original (featuring a chilling Peter Lorre) is great, the remake benefits from more exotic locations (Morocco replaces Switzerland), a terrific Bernard Herrmann score and perfectly cast leads in Hitchcock fave James Stewart and Doris Day (getting to stretch beyond her apple pie image).

(1982)
Perhaps no genre lends itself to the remake better than the ‘50s monster movie, as our top two films attest. 1951’s “The Thing From Another World

” is a more-than-serviceable fright flick about a Frankenstein-looking bloodsucking alien who terrorizes a military outpost in the arctic. But John Carpenter’s 1982 remake (which hews more closely to the source, a 1938 short story by John Campbell Jr. called “Who Goes There?

”) ups the ante considerably, turning the alien into an organism that takes on the forms of the bodies (yes, plural) it drains. The claustrophobic isolation of the frozen surroundings add to the paranoia and discomfort as the all-male staff of the research facility begins to turn against one another. One of the last great pre-CG sci-fi flicks, the effects are perfectly gross and the movie has an amazingly ambiguous ending that may cause you to cast a suspicious glance at the person next to you… and your dog, too.

,” with its cheesy giant fly head, Vincent Price and of course, the iconic “Heeelllp meeeeeee!” ending may be beloved, but it really makes no sense whatsoever (the disembodied cat’s meow is just wrong). David Cronenberg’s ‘80s update puts a logical spin on the concept. This time, when Seth Brundle, the inventor of the telepod (Jeff Goldblum) uses himself as a human guinea pig, the housefly that comes along for the ride and he don’t just swap head and hand. They merge on a genetic level, creating a human-fly hybrid that at first just seems to have a lot of energy and a strong sweet tooth, but quickly begins to (disgustingly) morph into something else. It’s hard to imagine anyone who could so perfectly meld some of the most nauseating makeup in film history with a truly heartbreaking love story (Geena Davis is perfect) better than Cronenberg. A true classic of the ‘80s

What’s next in the remake queue? Well, in the coming year or so, we’ve got “The Bad Seed

,” “The Man Who Fell to Earth,” “Logan’s Run” and the long-rumored “Porky’s.” Just to name the more recognizable few. Whether or not any of these replace (or at least sidle up next to) the originals, only time will tell. The odds are against ‘em, but let’s try to keep an open mind. Oh, except for the NEW update of “The Fly.” Forget it, fellas, that one’s done.