,” the story of Jesse James Hollywood, a drug dealer turned killer who managed to make the FBI’s most wanted list by the age of 20. Not only is Jesse’s name real, but so is the story, adding “Alpha Dog” to a long list of films based on actual crimes. We’ve called in some of the usual suspects and a few ringers to put together a line-up of the top ten True Crime Movies (although the names may have been changed to protect the innocent). 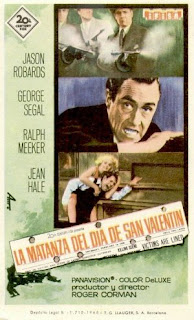 10) The St. Valentine’s Day Massacre (1967)
Perhaps no criminal has ever been featured in more pop culture than Al Capone. From 1932’s “Scarface

” to Brian DePalma’s 1987 adaptation of “The Untouchables

,” the prohibition-era Chicago gangster has become a pop icon. While those two movies are mostly apocryphal, “The St. Valentine’s Day Massacre” Is based on an actual Feb. 14th 1929 strike by Capone against rival gangster Bugs Moran’s crew. The tall, thin Jason Robards may not look like Capone the way Robert DeNiro does in “The Untouchables,” and George Segal (playing a mob enforcer) couldn’t be menacing in any context, but B-movie auteur Roger Corman’s stylish direction makes this one of the more memorable mob movies (look for a cameo by the young Jack Nicholson).

(2003)
Arguments will rage forever as to whether the Florida prostitute - turned serial killer Aileen Wuornos was a victimized vigilante or a pure psychopath, but few can deny the power of Charlize Theron’s Oscar-winning portrayal in this 2003 film. Yes, Theron gained 30 pounds and wore hideous false teeth to obscure her natural beauty, but to reduce her transformation to mere physicality is unfair. Theron manages to make Wuornos simultaneously sympathetic and terrifying, you find yourself hoping she’ll get her life together even though the film’s tragic end is a foregone conclusion.

(1990)
Our tabloid culture’s perverse fascination with crime takes on an air of schadenfreude when it occurs in high society. “Reversal of Fortune” tells the true story of wealthy socialite Claus Von Bülow’s attempt to overturn a conviction of attempted murder of his wife, Sunny by insulin overdose. Glenn Close plays Sunny, both in flashbacks and in a voiceover narration from her vegetative comatose state. Jeffrey Irons is at his icy best as the vindicated (but perhaps yet guilty?) Claus in a role that won him a Best Actor Oscar. 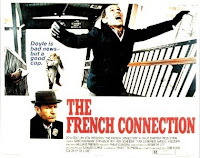 (1971)
Gene Hackman plays “Popeye” Doyle, a New York City police detective obsessed with capturing a French heroin smuggler in this thriller, based on an actual Turkey-France-United States drug trafficking scheme that exploded in the 1960s. William Friedkin directed this nail-biter, one of those great, gritty Seventies flicks that’s painted in a dozen shades of gray. The film won Oscars for Best Picture, Actor, Screenplay and Editing and contains what many still consider the greatest car chase scene in film history (as well as an achingly ambiguous ending that would never fly today).

(1994)
Years before he brought to life orcs and giant apes, director Peter Jackson tackled another kind of monster in the real life story of two 1950s New Zealand girls who murder the mother who forbids them to see each other when their close friendship becomes too obsessive. In her first film role, Kate Winslet plays the daughter who takes a brick to her mother’s head… 45 times. Jackson, following up his gorefest horror film, “Braindead

(1975)
Sidney Lumet directs Al Pacino in arguably his best role as Sonny Wortzik, a man who attempts to rob a bank to pay for his lover’s sex change operation, only to have everything go wrong on a sweltering New York summer day. As a police standoff drags on for 14 hours, the throng of onlookers begins to root for Sonny as a champion of the oppressed. While it sounds like this is one of those “based on a true story” flicks that plays fast and loose with the details for dramatic impact, it actually hews very closely to the actual events of the robbery.

(1959)
The Leopold & Loeb murder case was one of the most notorious crimes of the early 20th century. In 1924, two wealthy law students kidnapped and killed a 14 year old neighbor merely to prove their professed Nietzschean superiority. Their subsequent trial (during which it was revealed they were lovers) caused a media frenzy and the story inspired dozens of works of fiction. While Alfred Hitchcock

’s “Rope” is merely inspired by the events (turning the killers into two Manhattan students who strangle a friend right before a dinner party), it’s a riveting portrait of narcissism. Hitch (no stranger to sublimated urges) paints almost every character (not just the killers) with black swaths of self-absorption, forcing the audience to consider the ease with which we all say we’d like to kill someone for the mildest infraction.

1959’s “Compulsion” (which changes the names of the actual parties while mostly sticking to the details) is concerned more with the trial, with Orson Welles playing the stand-in for actual defense attorney Clarence Darrow. The movie has an oddly anachronistic style, never quite evoking the time period, but is buoyed by some fine performances. More permissive times would allow 1992’s “Swoon

,” which was more about the relationship between the two killers.

3) All the President’s Men

hit theaters, so the wounds on the nation were still fresh. Dustin Hoffman and Robert Redford play the fledgling Washington Post reporters who uncover the connection between the White House and the break-in at the Democratic National Committee. As intricate as the story itself, the film still manages to be the most exciting “talking head” thriller you’ve ever seen.

2) Henry: Portrait of a Serial Killer

(1986)
At least in films, it used to be easy to spot the bad guys: They wore black, sported furrowed brow and sinister moustache, perhaps scarred by some past altercation. But “Henry: Portrait of a Serial Killer” presented a new kind of terror: an otherwise normal guy who just liked to murder. Based on the confessions of Henry Lee Lucas, this brutally visceral film (directed by John McNaughton) has earned cult status over the years. Michael Rooker plays Henry alongside Tom Towles as his white trash killin’ partner Otis. The movie is made only slightly less disturbing by the revelation that the vast majority (but not all) of the hundreds of murders to which Lucas confessed never occurred.

about the brutal slaying of a rural Kansas family was adapted into this chilling film two years later by Richard Brooks. The film opens by showing the parallel lives of the simple, God-fearing Clutters and Perry Smith and Dick Hickcock (Robert Blake and Scott Wilson), two hard-luck drifters who hear that there’s a small fortune hidden on the Clutters’ farm. The movie then cuts to the day after the murders, following the search for the killers, their capture, trial and execution, with the sad, maddening details of the pointless massacre told via flashback near the end of the film. The semi-documentary style of the movie combined with the stark black and white cinematography and understated performances by the cast add a harrowing air of authenticity to the film (and of course, recent events in the life of Blake have given “In Cold Blood” an ironic undercurrent that only adds to its true crime résumé).