on which he used the pseudonym “Napoleon Dynamite” (there’s some trivia for ya), but rather an adaptation of the 1997 gothic romance novel

by Annette Curtis Klause about a young, lovely werewolf who falls in love with a normal human. It’s “Teen Wolf

” and it bays at us to dig up our ten favorite lycanthropic films of all time!

(1962)
“In shocking COLOR! Monsters meet 20 LOVELY MODELS!!!” “Lovable” Bob Cresse plays Granny Good, the transvestite housemistress of a secluded mountainside girls’ school that happens to double as a moonshine distillery. Granny’s hooch-makin’ assistant is an underpaid werewolf named Krakow. A Halloween party brings a visit from Dracula and Frankenstein’s monster (who can really cut a rug) as well as the feds and Krakow’s union locals. The costumes look like, well, cheap Halloween costumes, but who cares!

(2002)
A British Army squad training in the Scottish Highlands finds itself under attack from a pack of bloodthirsty werewolves. The team is aided by a comely zoologist who turns out to have ulterior motives. Director Neil Marshall’s ode to “The Evil Dead

” was never released theatrically in the US, but has gained cult status due to its smart mixture of gross-out horror and humor as well as its old-school physical effects. There’s nary a CG wolf to be seen, and as anyone who’s suffered through “Van Helsing

” or “An American Werewolf in Paris

” can tell you, that’s a very, very good thing.

(2000)
The blood-curse metaphor is a pretty obvious one, even if it’s been mostly sublimated in wolfman, uh, woman films. But this Canadian flick puts “the curse” front and center. The Fitzgerald sisters Ginger (Katharine Isabelle) and Brigitte (Emily Perkins) are death-obsessed goth girls with no friends other than each other. But when Ginger is bitten by a wolf the same night that she receives her very first visit from Aunt Flow, her body changes in more ways than one. She becomes aggressive, horny and yes, hairy, and Brigitte finds that she must either find a way to cure her sister… or kill her. The effects are serviceable at best, but not the point of this thought-provoking, most uncommon teen thriller. 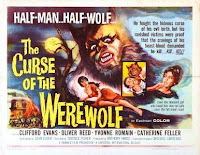 7) The Curse of the Werewolf

(1961)
Set in 18th century Spain, “The Curse of the Werewolf” perfectly casts the notoriously feral Oliver Reed as Leon Corledo, the tortured offspring of a mute servant girl who was raped by a beggar with whom she shared a cell. The unwanted Leon, being born on Christmas day, is considered an insult to God and thus cursed with lycanthropy (making this very unlikely holiday fare), brought to the fore by human weakness and vice. The adult Leon must find true love to cure the werewolf curse before it’s too late. Featuring a really cool white-furred werewolf, this film is one of the better “Hammer Horror” films of the ‘50s-‘70s.

(1981)
Dee Wallace plays Karen White, a TV news anchor whose participation in a porno theater sting to capture a serial killer ends badly, putting her and her husband at “The Colony,” a rehab retreat for the emotionally, physically and/or sexually exhausted. Or is it a mountain resort for werewolves? Oh, yeah, that’s it. Populated with B-Movie A-listers such as Patrick Macnee, James Carradine and Slim Pickens, chock-full of in-jokes for horror movie fans and peppered with (then) state-of-the- art makeup effects by Rick Baker, “The Howling” has aged into a ripe time capsule that remains both exciting and funny (altho’ not quite as much as the top film on our list). 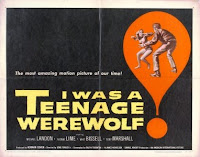 5) I Was a Teenage Werewolf (1957)
Michael Landon plays Tony Rivers, a James-Deanesque angst-ridden ‘50s teen in this B-classic. Rivers is sent to a psychiatrist for help with his anger issues, but the shrink turns out to be an unscrupulous mad doctor who uses a combination of hypnosis and an evil serum to regress the future Pa Ingalls into a letter-jacket-clad wolfboy every time the school bell rings! Later that same year, the film’s studio, AIP milked the formula two more times with “I Was a Teenage Frankenstein” and “Blood of Dracula” (in essence a teenage vampire flick), but “Werewolf” is the most fun (and much better than the fairly execrable 1985 “Teen Wolf”).

4) The Company of Wolves

,” a psychosexual reworking of the Little Red Riding Hood story. Like “Ginger Snaps,” “Company” is an allegory about a woman’s sexual awakening as she enters puberty, but the (were)wolves in the film are decidedly male: predatory, lustful and untrustworthy. Featuring some wonderfully bizarre performances by Angela Lansbury (as the tale-spinning Granny) and Terence (General Zod!) Stamp as the Devil, this decidedly British film is not recommended as a date flick for fellas sporting unibrows.

(1994)
Mike Nichols directed this most adult of wolfman movies. Jack Nicholson plays Will Randall, a mild-mannered book editor who finds his job threatened by alpha male newcomer Stewart Swinton (the always-creepy James Spader) right around the same time he’s bitten by a wolf. As Will begins to feel the effects of the bite, he becomes more dynamic, more energetic and far more territorial (the scene in which he “marks” Spader is the film’s iconic moment). The movie’s not quite as magnificent an update as David Cronenberg’s “The Fly

” (see last week’s Rewind), but anyone who’s ever dealt with sleazy corporate politics may find it even more cathartic than “Office Space 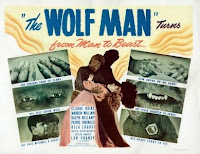 (1941)
While he may not be #1, Lon Chaney Jr.’s Wolf Man deservedly sits in the pantheon of the classic Universal Monsters, alongside Bela Lugosi’s Dracula, Boris Karloff’s Frankenstein Monster and the Mummy (Actually, this was Universal’s second stab at the monster, following the less successful “Werewolf of London

” in 1935). Chaney plays Larry Talbot, an American who returns to his native Wales following his brother’s death. One night Larry saves a young woman from an attack by a ferocious wolf, killing the beast with his silver-tipped walking stick, but getting bitten in the struggle. Sure enough, now Larry’s got the curse. In all honesty, Chaney’s not the most frightening LOOKING werewolf (he more resembles a warthog). But what makes this film a classic is how sympathetic Chaney makes Talbot, with his soulful hangdog looks and palpable angst over his fate. Chaney would reprise the role (albeit in more supporting parts) four more times, culminating in the less-than-terrifying (but hilarious) “Abbott and Costello Meet Frankenstein

1) An American Werewolf in London

(1981)
How do we love John Landis’ classic horror/comedy hybrid? Let us count the ways. 1. David Naughton and Griffin Dunne are delightful as American students David and Jack, backpacking through Europe until a wrong turn onto the English moors puts them at the mercy of a ravenous wolf (Jack is killed; David lives). 2. Jenny Agutter is beautiful and heartbreaking as the hospital nurse who falls in love with Jack. 3. Makeup / effects artist Rick Baker’s brilliant (pre-CG, remember) transformation sequence is one of the (if not THE) most amazing visuals in any werewolf film. 4. The economy of the werewolf shots (regardless of the financial reasons for them) adds to the dread. 5. There’s a plethora of hilarious lines (“A naked American man stole my balloons!”). 6. The progressively rotting Jack (walking the Earth undead until neo-werewolf David kills himself and severs the bloodline) is the greatest sidekick in any horror film. 7. It’s got a terrific moon-themed soundtrack. 8. It’s a pitch-perfect post-modern monster movie that simultaneously celebrates and satirizes its genre.

Lycanthropic runners-up include the urbane “Wolfen

” (1971) pitting Mexican wrestling superhero Santo and his pal the Blue Demon against Dracula and his friend the Werewolf; the bikers-meet-biters flick, “Werewolves on Wheels

And that barely scratches the surface. There are many more werewolf flicks that you’ve never heard of, and with good reason. The genre seems to lend itself to bad movies, which is why the ten above are so remarkable. Still, we can’t help but have high hopes for Universal’s upcoming remake of 1941’s “The Wolf Man