.” Traditionally, when characters in movies burst into song, you’re hearing a professional singer’s voice dubbed in. It takes guts for an actor to actually lay down some vocal tracks in a film, and the results have been mixed. While some have egos huge enough to delude themselves into thinking they’re the next Frank Sinatra, a lot of times they end up evoking Frank Stallone.

” was so bad that the performance you hear onscreen was carefully constructed from bits and pieces of numerous takes. Playing Sky Masterson was an especially gutsy move for the method actor, considering he had to hold his own against none other than Mr. Sinatra (who was furious that Brando got the bigger part).

But sometimes a distinctive, if less than Met-worthy voice can work in a film. Marilyn Monroe

was an awful singer, but her breathy vocalizing fit her characters in “Gentlemen Prefer Blondes

In 1969, the musical western comedy “Paint Your Wagon

” gave us tough guys Clint Eastwood and Lee Marvin as singing gold prospectors. Eastwood had actually recorded a few singles prior to this film (and has subsequently sung in movies including 1982‘s “Honkytonk Man

”). Marvin, on the other hand, seemed unaware of his limited range, but his scratchy warbling still managed to score a #1 hit in England with “Wanderin’ Star

” (1975), a satire on the politics of America and the music business, featured much improvisation and the realism-obsessed director actually demanded that his stars, including Henry Gibson, Lily Tomlin and Karen Black not only perform their own songs in the film, but WRITE them as well!

” proved that former sweathog John Travolta could dance, but his big screen follow-up showed that he had the pipes to match. As Danny Zuko in 1978’s “Grease

” Travolta’s become an iconic part of one of the most successful musicals of all time (would it be the same if Henry “the Fonz” Winkler had accepted the part?).

Despite what “American Idol” would have you believe, sometimes technical ability isn’t as important as passion. What started as a self-indulgent gag on “Saturday Night Live” turned into a full side career for comedians John Belushi and Dan Aykroyd as “The Blues Brothers

” (1980) became a smash both onscreen and in the record stores. Following Belushi’s death in 1982, later attempts by Aykroyd to recapture the magic never quite felt as genuine (If there’s any heir apparent to John Belushi, it’s Jack Black, whose musical performances in films like 2003’s “School of Rock

” and last year’s “Tenacious D: The Pick of Destiny

Woody Allen’s 1996 musical experiment, “Everyone Says I Love You

” intentionally cast non-singers such as Edward Norton, Drew Barrymore, Alan Alda, Goldie Hawn and Tim Roth in order to create a more realistic depiction of what it would like if people spontaneously burst into song in real life. In fact, Woody had to ask Hawn (who had recorded an album in 1972

) to sing worse, while Drew’s singing was a bit TOO cacaphonous… she was the only cast member to be redubbed.

In a wonderfully surreal moment in Paul Thomas Anderson’s “Magnolia

” (1999), much of the cast, including Tom Cruise, Julianne Moore, Jason Robards, John C. Reilly, and William H. Macy (but excluding the frogs) begins interacting with the soundtrack, singing along to Aimee Mann’s “Wise Up

” boasts somewhat less-than-mellifluous singing by Gwyneth Paltrow, Paul Giamatti, and Maria Bello, but they are to be excused in that the film is based in the world of karaoke, an arena not known for musical prowess.

,” an embarrassingly cliché-ridden tale of an all-girl band trying to make it in L.A. Spewing lines about what is and isn’t “rock and roll” (what musicians TALK like this?), Gershon snarls and snaps like an exaggerated Courtney Love impersonation. Further evidence of how much the actress came to think that she was a real rock star came in a painful 2004 reality series, “Rocked With Gina Gershon

,” in which she toured with a backing band (Girls vs. Boys

) to promote the film.

When an actor plays an actual musician in a biopic, they have two options: Lip-synch or swim… uh, sing. For those thespians brave enough to tackle the musical part of the performance as well as the dramatic, the rewards can be great. In addition to winning a Best Actress Oscar for her role as Loretta Lynn

earned her a Grammy nomination for Best Country Vocal Performance. 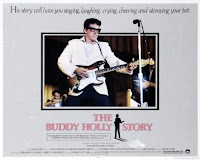 ” (1978), the concert scenes were recorded live during filming to capture the energy of the shows. As part of his prep for the movie, Busey put together a band and went on tour with Holly’s songs, in order to feel comfortable performing in front of an audience.

Jamie Foxx won an Oscar for his channeling of Ray Charles

,” but Foxx was actually a musician before he became an actor. Critics were more surprised by the deftness with which Joaquin Phoenix managed to evoke the seemingly-inimitable Johnny Cash

.” While Phoenix wouldn’t win his Oscar nod, his co-star, Reese Witherspoon did get Best Actress for her musical / dramatic interpretation of the love of Cash’s life, June Carter Cash.

”) is a decent singer, and tried valiantly to conjure Bobby Darin

.” The movie was a passion project for the producer-director-star, but a combination of age (the 45 year old Spacey just can’t pass for a twenty-something Darin) and a permeable air of self-indulgence is distracting.

In recent years, musicals featuring big name stars have made a comeback. Audiences were surprised to hear Nicole Kidman and Ewan McGregor hold their own in Baz Luhrmann’s 2001 version of “Moulin Rouge!

” The young Obi-Wan and the former Mrs. Cruise belt out songs by Elton John, Rodgers & Hammerstein, the Beatles, Kiss, Queen and more with an authority that caught many critics off guard. The following year, “Chicago

” opened even more eyes (and ears) with respectable musical performances by Renée Zellweger, Catherine Zeta-Jones and Richard Gere. McGregor and Zellweger enjoyed their musical experiences enough to ask for a song and dance number in Peyton Reed’s 2003 homage to frothy ‘60s sex comedies, “Down With Love

But perhaps the strangest example of trilling thespians ever comes at the climax of “Star Trek V: The Final Frontier

” (1989), in which Captain Kirk, Mr. Spock and Dr. McCoy sit around a campfire singing “Row, Row, Row Your Boat.” Still, it could have been worse. They could’ve tried to harmonize William Shatner’s version of “Mr. Tambourine Man!