Dinner and a movie: what's in Hannibal Lecter's Netflix queue?

Roll out the Pepsid, it’s our unappetizing countdown of the top ten cannibal flicks!

First it was Batman

,” the tale of how young Hannibal Lecter

developed his taste for gourmet foods, fine wine and human flesh. Which got us wondering what his taste in films might be. Herewith, our guess at what’s in Lecter’s Netflix queue.

10) Night of the Living Dead

(1968)
Of the legion of zombie films, the “Citizen Kane” of the genre remains George Romero’s original 1968 classic. From the ominous first shot of the slow-rambling man behind Barbra and Johnny in the graveyard, the tension builds with each scene, the revelation that zombies are roaming the entire east cost, feasting on the flesh of the innocent illustrated by shocking, bloody effects that audiences had never seen before. Thanks in no small part to its low-budget but incredibly evocative use of stark black and white cinematography, the movie still packs more of a wallop than all of its many sequels, remakes and imitators. And Hannibal loves the classics.

(1980)
Exploitation films traffic in cannibalism almost as much as they enjoy exposed breasts (which is a lot). This Italian film directed by Ruggero Deodato tells of an anthropologist’s expedition to find out the fate of four missing documentarians who journeyed deep into the Amazon to study the natives (hint: the filmmakers were delicious). The movie remains incredibly controversial due to some brutal rape scenes and some genuine animal cruelty caught on film. Lecter has a thing for censored foreign films.

(1974)
Ya almost gotta feel sorry for Leatherface, the yowling provider for the cannibalistic farm family in Tobe Hooper’s seminal slasher flick. Not only does he have to dismember and prepare the human feasts, he has to deal with all these pesky teenage trespassers who keep interrupting his work. Oh, well, at least they taste better than the old meat from the graveyard. Like “Night of the Living Dead,” the original “Massacre” has aged well and is far superior to its progeny (altho’ Jessica Biel sure looks good in the 2003 remake

). Hannibal credits Leatherface with his brilliant escape plan in “Silence of the Lambs.”

7) Monty Python and the Holy Grail

(1974)
No, that’s not a mistake. Just because it was told via narration doesn’t exclude Python’s best film from Hannibal’s cannibal queue (besides, he loves British humor). In an animated transitional segment of the film, King Arthur and his Knights of the Round Table are searching for Tim the Enchanter when, in the frozen land of Nador, they are forced to eat Sir Robin’s minstrels. And there was much rejoicing. 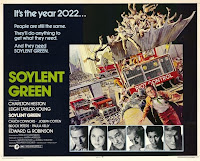 (1973)
In this dystopian thriller, it’s 2022 and the population has overtaken the world’s capability to sustain itself. Families live in cars and hallways, global warming has produced a constant heatwave, self-prescribed euthanasia is encouraged and only the most wealthy can afford actual food. The rest of the populace has to subsist on government rationed synthetic food manufactured by the Soylent corporation. But even the brightly colored squares of Soylent Red and Yellow are running low. Luckily, the main ingredient in the popular Soylent Green is the only thing on the planet NOT in short supply (see the note about overpopulation, in case you don’t get it yet). The movie raises the question, is it still cannibalism if the flesh is processed into bite-sized wafer form? Hannibal loves this movie because he always wondered what Charlton Heston would taste like.

(1980)
Rory Calhoun plays Farmer Vincent, the operator of the Motel Hello (the second “o” on the neon sign is busted) and purveyor of sausage with the motto, “It takes all kinds of critters to make Farmer Vincent fritters.” Critters like unsuspecting travelers, who get bonked on the head, buried in Vince’s “garden” up to their necks and fattened up until they’re ripe for harvesting. This “Texas Chain Saw” parody includes a porky variation on Leatherface’s mask and some other gruesome chuckles amidst the gore. Lecter won’t admit it, but he loves this film (he’ll claim in public that 1982’s “Eating Raoul

” is the better cannibal cult comedy, but don’t believe him).

(1991)
Another black cannibal comedy, this French film is set in a post-apocalyptic era (although whether it’s the past or the future is undeclared) where a butcher / landlord feeds his idiosyncratic tenants with delicious cuts of meat hewn from his rapidly-turned-over staff. “Delicatessen” is a bit precious at times (which is why Hannibal loves it) and it’s the orangest film ever made, but it’s also unlike anything you’ve ever seen, which is rare. Or at least medium-rare. But leave it to the French to make the hero of the story a literal clown. Yeesh.

(1993)
“Alive” is based on the true story of a Uruguayan rugby team struggling to survive after their plane crashes in the Andes mountains in 1972. The film received mixed reviews, some critics faulting the rather WASPy casting (Ethan Hawke and John Haymes Newton are decidedly un-Hispanic), a lack of visual believability (after over two months huddling in half a plane fuselage in the frozen mountains and dining on nothing but snow, chocolate and rugby-player jerky, you’d think the characters wouldn’t appear so hale and hearty) and the film’s rather heavy handed proselytizing. But the cannibalism is handled with a refreshing lack of sensationalism and the plane crash sequence is one of the most terrifying ever put to film. Lecter doesn’t love the film, but he’s a big fan of Spanish quisine.

2) The Cook the Thief His Wife & Her Lover

(1989)
Peter Greenaway’s delectable slice of subversion created a huge stir upon release in 1989 and not because of its awful punctuation. The cautionary tale proves that you do indeed reap what you sow, and if you treat people like animals, they’re liable to wind up on your dinner table. The climactic scene, in which mobster / restauranteur Albert Spica (Michael Gambon) is served (at gunpoint) the prepared body of his wife’s murdered lover is perhaps the most simultaneously beautiful and repulsive image in film history. Albert doesn’t get to be a cannibal for long, but that first bite is a toughie. Not only is this Lecter’s favorite film, he actually cribbed a few ideas from it.

” perception of the 1950s has been an easy but ripe target for satire since that decade ended. But things were never really that innocent, and this underrated film plays on both the secrets of suburbia and the childhood paranoia that our parents are hiding something from us. Young Michael (Bryan Madorsky) is more than a tad suspicious of his folks, Nick and Lily Laemle (the deceptively innocuous Randy Quaid and Mary Beth Hurt), especially after he finds them frolicking on the kitchen floor covered in blood one late night. The movie, with its gratuitous shots of unappetizing mystery meat is enough to make the Burger King go vegetarian. And while it’s not perfect (one feels that director Bob Balaban was a bit scared to really let loose with his premise), the movie is still a fine, twisted, Freudian take on the so-called “normal” American family, and the fact that people can’t decide if it’s a horror film or a comedy only adds to its appeal. Hannibal’s equivalent of “Father Knows Best.”