Has it EVER been safe to go into the water?

” aka “The Host,” about a mutant fish-monster wreaking havoc around Seoul’s Han River! There are lots of scary lurking in the murky open waters: Jellyfish, garbage, little kids’ pee, and that weird guy on the boogie board who keeps staring at your girlfriend. But are they as menacing as our list of the top ten water-dwelling movie threats? Strap on your fins and take a dip with us!

10) The Atomic Octopus in “Bride of the Monster

” (1956)
Okay, so the guard octopus in Ed Wood’s opus about the evil Dr. Varnoff (Bela Lugosi, ‘natch) and his plot to create atomic super-beings isn’t that impressive at first. Stock footage of an octopus doesn’t match the rubber creature that only moves when a victim is making its arms flail about (gloriously recreated in Tim Burton’s “Ed Wood

”). But when the eight-armed creature is shot at the end, it explodes with the power of a nuclear explosion! Oh, wait, that’s just more stock footage.

(1953)
In this groundbreaking monster movie, an atomic test awakens a hibernating Rhedosaurus (don’t look for it at the Museum of Natural History) which swims to New York and wreaks havoc at Coney Island! Stop motion animation legend Ray Harryhausen designed the sense-rattling effects, and the movie begat the whole “atomic monster” genre (which exploded the following year with the star of our next selection).

8) Godzilla vs. the Sea Monster

aka Ebirah, Horror of the Deep (1966)
Two, count ‘em, two giant creatures from the deep do battle in this otherwise unremarkable entrant in the quintessential Japanese monster series. Godzilla’s not tromping Tokyo in this one, he actually spends most of the film napping on a small island until he’s awakened by a bunch of meddling kids to do battle with the evil terrorist organization Red Bamboo… oh, and Ebirah! A giant, evil, um, SHRIMP! No, really! Mothra gets in on the action for a little bit, too.

” (1999)
David E. Kelley may be best known for his legal TV dramas such as “L.A. Law,” “Boston Public” and “The Practice,” but he also penned this campy B monster movie. Bridget Fonda plays a paleontologist who teams with game warden Bill Pullman to investigate a giant creature attacking people in a Maine lake. The beast turns out to be a monstrous crocodile that’s grown to 30 feet due to a diet of swimmers, misplaced bears and cows fed to her by a foul-mouthed Betty White!! No Oscar winner, but good campy fun.

6) Humanoids from the Deep

5) the, uh, Septopus from “It Came From Beneath the Sea

” (1955)
Ray Harryhausen returned to sea creatures with this 1955 entrant, in which an enormous, mutated octopus attacks San Francisco! After destroying the Golden Gate Bridge, the beast slithers inland where it wreaks more destruction before being blown to smithereens. It’s funny to note that due to budgetary and production limitations, this octopus only has six legs! Still, it’s scarier than Ed Wood’s rubber nuke-topus.

(1956)
Dr. Carlo Lombardi, an evil hypnotist mesmerizes his lovely assistant (the babealicious Marla English) and conjures her prehistoric ancestor from the sea, the hideous She-Creature! Dr. Lombardi’s reputation as a psychic grows when he begins to predicts someone’s death, then have the creature kill that person! Great idea! Of course, all ends badly for the doctor and well for all mankind. The She-Creature was re-imagined as a mermaid with a dark side in a 2001 Cable Movie

, but the original is a far cooler beast from the depths (perhaps the only movie monster to display breasts?).

” (1954)
There have been numerous adaptations of Jules Verne’s classic 1870 novel, none more effective than the 1954 live action Disney film. James Mason stars as Captain Nemo, the vengeful commander of the Nautilus, the world’s first submarine, a metal beast that confused sailors believe to be a sea monster. The true monster of the tale is a giant squid that Nemo does hand-to-tentacle battle with near the film’s climax, a spectacular sequence that netted the film a 1955 Oscar for best visual effects.

(1975)
Arguably the most feared creature on the planet, the shark has figured prominently in hundreds of films, from 1930’s “Tabu

.” But no movie, before or since, better captured the primal terror the shark engenders than Steven Spielberg’s classic “Jaws.” The movie’s got it all: superb casting, brilliant acting, a whip smart screenplay and unrelenting tension peppered with moments of sheer terror, all set to John Williams’ perfect score

. The movie’s suspense was unintentionally abetted by a reluctance to show too much of the malfunctioning mechanical shark, which worked to the film’s advantage. To date, “Jaws” remains Spielberg’s best film. Really. 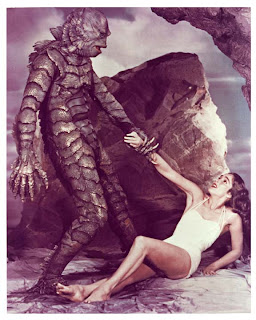 1) The Creature from the Black Lagoon

(1954)
Few classic monster movies have aged as well as this late entrant in the Universal Horror series (originally released in 3D). An archaeological expedition through the Amazon becomes stalked by a man-fish missing link who finds himself attracted (along with every other man in the film) to the lovely Julie Adams. The creature is one of cinema’s most beautiful monster designs, but it’s his humanity that makes the Gill-Man so compelling and tragic. Two not-bad sequels followed, and a remake is in the works, which could be good, but we doubt will be better than the original.

And lest we forget the giant worms of “Deep Rising

” (numerous versions, most notably the 1956 film starring Gregory Peck), the killer oceanographer in a monster costume of “The Beach Girls and the Monster

” (2004), and the various aquatic beasties from the “Pirates of the Caribbean

” films just to name a few more. Jeez, with all this monstrous evil goin on in the oceans, maybe Aquaman