Riding flaming motorcycles up the sides of buildings is tricky; Getting a comic book adaptation right is even trickier.

. But will it connect with audiences ala “X-Men” or miss the mark like “Hulk?” Over the years, Marvel has had spotty luck with live action incarnations of their roster of superheroes, both on the big and small screen. 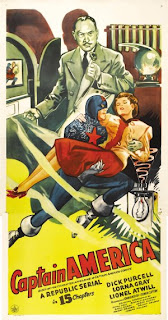 ” in the 1944 Republic Pictures serial. In what may have been a precedent-setting bad move, they ditched the comic book backstory

(frail Steve Rogers volunteers to be the human guinea pig for a super-soldier serum during WWII) in favor of turning Cap into Grant Gardner: district attorney by day, star-spangled crimebuster by night. But this pistol-packin’ Captain America doesn’t even carry the iconic shield, which is kinda like Wolverine without the claws. As with many early superhero adaptations, there’s really no reason for the costume at all.

The good Captain wouldn’t fare much better in his other manifestations. 1979 saw two cheesy “Captain America

” TV movies starring the beefy but dim Reb Brown as the son of the WWII hero who assumes his father’s mantle. This modern Cap is a surfer dude who tools around sunny California in a van and sports a redesigned costume that’s every bit as silly as the star-and-stripes original (which returned in the sequel). 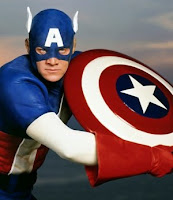 Captain America couldn’t even get respect with a 1991 feature film that went straight to video. Matt Salinger (son of J.D.) plays Steve Rogers in a story that sticks to the comic book basics with one major alteration: Cap’s Nazi arch-enemy the Red Skull is turned into an Italian fascist (?). An ill-advised attempt to incorporate the comic’s suspended animation plot (in which Cap gets frozen in ice at the end of WWII and is thawed out in our time) just muddles the campy tale even further.

Of course, Cap wasn’t the only Marvel hero to hit the small screen in the 1970s. “The Incredible Hulk

” (1977) led to the TV series and was by far the most successful live Marvel adaptation up to that time. A 1978 “Dr. Strange” telefilm is also warmly regarded by the fanboys (despite a master of the mystic arts who sports a Brady-worthy perm). But Marvel’s most popular character didn’t come off so super. 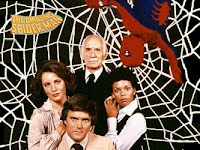 ,” “Spider-Man” starred in a 1978 TV movie with Nicholas Hammond (one of the von Trapp kids from “The Sound of Music

”) in the sloppiest, most ill-stitched superhero costume ever put to film. Shooting ropes (there was nothing weblike about them) from an enormous charm bracelet, awkwardly climbing Los Angeles buildings (it was only nominally set in New York) and exhibiting piddling super strength, this Spidey was little more than an investigative photographer in pajamas. The movie spawned a sporadically-aired TV series (meanwhile, an entirely different live action Spidey was fighting monsters and robots in a far more action-packed Japanese Tokusatsu TV series). 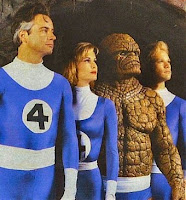 Every fanboy knows the story of the first “Fantastic Four” movie, a 1994 cheapo Roger Corman production that was made to retain the rights before they expired. The film was never intended for release, but bootlegs are widely available, giving curiosity seekers a look at just how schlocky a superhero movie can be. Then again, we’re of the mind that Tim Story’s 2005 “Fantastic Four

,” despite being a huge hit, was likewise a poorly-conceived and blandly executed take on the cornerstone of the Marvel universe. If ever a character were designed to be brought to life by CGI artists, it’s the Thing (no offense, Michael Chiklis).

” was Marvel’s hippest title, a smart satire on everything from religious cults to presidential politics (KISS even made their comic debut in Howard’s pages). By 1986, Howard’s cult had already cooled, but that didn’t stop Lucasfilm from releasing a live action adaptation

pitting the misplaced drake against the Dark Overlord of the Universe. The effects were awful, the tone was off, the casting was bad (Lea Thompson?) and the general public had no idea what to make of Howard. The movie has gone on to become (ala “Ishtar”) one of those infamous flicks that’s synonymous with a true turkey.

” TV movies, reuniting the original cast of the series and teaming the big green guy with other Marvel heroes, although with less than spectacular results. In “The Incredible Hulk Returns” (1988), David Banner meets a comedic version of the Mighty Thor who’s as different from the comic hero as Adam West’s Batman is from Christian Bale’s. The following year, “The Trial of the Incredible Hulk” introduces a black-clad Daredevil played by former teen heartthrob Rex Smith, who’s only slightly less believable than that character’s later incarnation.

In 1989, another Marvel cult figure hit theaters with Dolph Lundgren in the title role as the vengeful, gun-toting Frank Castle, aka “The Punisher

.” But this was another film to turn its back on the source, changing Castle from an ex-soldier to an ex-cop, eliminating a key element of the characters’ psychological underpinnings. Adding insult to injury, they ditched the comics’ look of the Punisher, an odd choice considering at the time, the Punisher was one of the only comic book crimefighters who DIDN’T sport colored spandex… he simply wore black with a huge white skull emblazoned on the shirt (although he did sometimes wear some pretty fancy white boots).

The Punisher’s second shot came in 2004, with Thomas Jane starring in a film

that was somewhat more faithful to the comics (Castle is a war veteran and sports the skull), but still met with cries of sellout by fans of the hyper-nihilistic anti-hero. Turns out the comic book Punisher may well be TOO dark and violent to be made franchise-friendly, perhaps revealing Hollywood’s relative lack of cojones compared to comics. 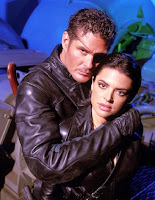 Still, the Punisher retained some cred in comparison with a kindred spirit in the Marvel universe. Since the 1960s, the covert government agency S.H.I.E.L.D.

has been led by Nick Fury, a gruff, cigar-chomping, one-eyed ex-GI who can give Wolverine a run for his money as Marvel’s toughest bad-ass. So who gets cast as Fury in the 1998 TV-movie

” movie, which received decent reviews and did fairly well. But the real boost came with Bryan Singer’s critical and commercial smash “X-Men

” (2000), which both took away the bad taste of the 1996 TV movie, “Generation X” and proved that a film about a whole team of superheroes could click with both fans and the general public. In 2002, Sam Raimi’s nostalgic but thrilling “Spider-Man

” was loudly thumped by fans who dissed the casting of frat boy Ben Affleck as the blind superhero (as well as African American Michael Clarke Duncan as the traditionally-white Kingpin and a very WASPy Jennifer Garner as the Greek Elektra) in a film that tried too hard to squeeze too many of the comic book’s storylines into 103 minutes. Garner’s “Elektra

” spin-off (2005) was practically ignored at the box office (although we think it’s a better picture).

Similarly, audiences didn’t quite know what to make of Ang Lee’s interpretation of “Hulk

” (2003). Dropping both the article-adjective descriptor “The Incredible” as well as traditional slam-bang action in favor of an introspective rumination on the effect of repressed memories and emotions as well as family dynamics, Lee’s film is best viewed as an interesting experiment in Eastern – meets - Western sensibilities (in Marvel movie tradition, the Hulk will get a second shot

that ignores this film altogether).

Over the past few years, the results have remained mixed: Both “X2” (2003) and “Spider-Man 2” (2004) bettered the first films, but the “Blade” movies saw diminishing returns (despite spawning a short-lived TV series) and many fans felt that last year’s “X-Men: The Last Stand” missed the mutant mark. A 2005 “Man Thing

” (don’t ask) video/TV flick seemed like a bad idea from the get-go.

Now that Marvel has its own production company (aptly named Marvel Studios), it’s unlikely the cinematic torrent of heroes, mutants and monsters is going to slow, regardless of what happens with “Ghost Rider.” Coming next: “Spider-Man 3” and “Fantastic Four: Rise of the Silver Surfer

” next summer, with prequels for Magneto and Wolverine in the works as well as many more. At this rate, it can’t be too long until we get “Forbush Man: the Motion Picture.” Excelsior!