Hollywood Babylon on the big screen! 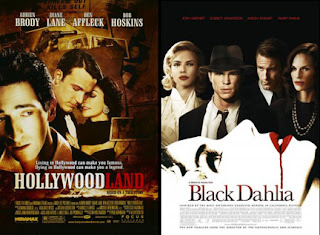 ” is based on the death (suicide or murder?) of George Reeves, star of the 1950s “Adventures of Superman

” TV show. And “The Black Dahlia

A world of dreams, more quashed than realized, Hollywood (more state of mind than geographic location, as the saying goes) creates as much real life drama as it does fictional. So it’s only natural that some Tinseltown scandals would come to be immortalized on the silver screen. Herewith, our list of ten movies depicting classic examples of what author Kenneth Anger dubbed “Hollywood Babylon

was a serious intellectual with no interest in glamour or the trappings of fame, much to the dismay of her studio publicists. Falling prey to alcoholism and a series of failed affairs, Farmer’s increasingly erratic behavior led to a diagnosis of paranoid schizophrenia and landed her in an institution. While the movie contains a scene of the actress being given a lobotomy, this never occurred, but that’s Hollywood for ya.

to Los Angeles to set up a west coast gambling ring. Immediately intoxicated by the glamour of Hollywood, Siegel began dating actresses and mixing with movie insiders (often to their financial detriment). In 1991’s “Bugsy,” Warren Beatty plays a highly glamorized version of the gangster, more suave than evil, even entertaining notions of becoming an actor himself. Still, both the real life and the movie Bugsy meet the same grisly demise: Shot through the eye. Siegel also inspired the character of Moe Greene in 1972’s “The Godfather

… played by Mira Sorvino. In some scenes, both actresses appear together, as the spirit of Norma Jean berates the drug addicted star with poor choice in men (okay, he was the President, but he was somewhat unavailable) that she’s become. Some critics fault Sorvino’s over-the-top acting as merely imitating the bubbly character Marilyn played in films like “Some Like It Hot,” but the film is a bizarre oddity worth checking out. Still, while Hollywood’s quintessential blonde bombshell has been fictionalized in dozens of movies, the definitive Marilyn Monroe biopic remains to be made.

7. One of the Hollywood Ten

(2000)
“Scandalous” is as subjective an adjective as any, and sometimes one finds oneself embroiled in controversy without doing anything wrong. Such was the case with the victims of the Hollywood Blacklist of the 1950s. Spearheaded by Commie-hating Senator Joseph McCarthy

, the House Un-American Activities Committee went after Hollywood with a vengeance, compiling a list of screenwriters, actors and directors believed be Communists or sympathetic to its cause. The resultant blacklist ruined careers and even lives. “One of the Hollywood Ten” focuses on Herbert Bieberman (Jeff Goldblum), a relatively unknown writer / director who went to jail for refusing to testify before the HUAC. Bieberman later hired other blacklisters for the cast and crew of “Salt of the Earth” (1954), a pro-worker movie about a miner’s strike in New Mexico.

(1994)
Okay, maybe we’re projecting our affection for the director of “Plan 9 From Outer Space

” by elevating his proclivity for cross-dressing to scandal. Sadly, most of Hollywood wasn’t even paying attention to Ed, even in the B-movie-laden 1950s. But Tim Burton, champion of the outsider, likewise loved the auteur enough to helm a 1994 biopic. As Wood, Johnny Depp overacts like Faye Dunaway screaming about wire hangers (see #1), but it works. The film also deals with Bela Lugosi’s addiction to morphine, another piece of fodder for the tabloids.

(1975)
85 years ago, silent film comedian Roscoe “Fatty” Arbuckle was arrested for the rape and murder of actress Virginia Rappe, who died of a ruptured bladder a few days after attending a party thrown by Arbuckle. While he was eventually acquitted, Arbuckle’s career was destroyed and today he is known only for the scandal. In 1975’s “The Wild Party,” James Coco plays a Fatty-esque Jolly Grimm, a silent film comedian who throws a debaucherous soirée that ends with him killing his girlfriend (Raquel Welch). Johnny Depp recently purchased the rights to Fatty’s story, but it remains to be seen whether he’ll gain a hundred pounds to play the comic.

,” do we?). “The Cat’s Meow” deals with the death of film producer Thomas Ince during a party on Hearst’s yacht in 1924. Legend has it that Hearst’s mistress Marion Davies (Kirsten Dunst) was having an affair with Charlie Chaplin (who was also in attendance) and Hearst, in a fit of jealous passion, shot Ince, mistaking him for the legendary comic actor. The fact that, to this day, nobody really knows what happened speaks volumes about the power Hearst possessed.

’s art and more on scandals such as his affinity for much younger girls and his far-left politics that caused some to accuse him of being a communist, and eventually forced Chaplin to leave the USA. Critics raved over the layered, insightful acting of Robert Downey Jr. in the title role, a performance that earned the actor (no stranger to scandal himself) an Oscar nomination.

(1997)
While “L.A. Confidential” weaves a number of real life events (including Lana Turner dating mobster Johnny Stompanato, who would later be killed by Turner’s daughter) into its tale of police corruption and Hollywood scandal in the 1950s, the film is mostly apocryphal. But the movie’s fictional celebrity gossip rag, Hush-Hush paints an accurate depiction of the way real tabloids like Confidential and Inside ruined careers and lives by outing the sexual orientation and revealing drug use among stars and starlets. Boy, it’s a good thing those rumor-mongering tabloids are a thing of the past, huh?

exploded into the public consciousness in 1978. Three years later, the film version of “Mommie Dearest” presented Crawford as a seriously scary alcoholic, abusive control freak. As played (waaaay over the top) by Faye Dunaway, this frightening image of the actress came to completely replace her previous persona of strong yet icy sophisticate (much to the dismay of some fans of classic Hollywood).

Between Robert Blake, Michael Jackson, Mel Gibson, et al, there’s certainly no shortage of contemporary scandals in Tinseltown. Whether any of those stories age into legend or fade into footnotes, only time will tell. Meanwhile, skeletons continue to fall out of the closets of classic Hollywood, fodder for more period pieces exposing the hush hush worlds of iconic stars. Modern audiences may not care about the films made by James Dean… but they’ll never get tired of looking at the stars’ dirty laundry.
______________________________________________________
ORIGINALLY POSTED in REWIND on MTV.COM, September 2006
Posted by Pops Gustav at 11:19 AM