The cinema of the subconscious

In “The Science of Sleep

,” a man torn between his dreams and reality struggles to regain control of his life and win the girl next door. Director Michel Gondry proved he was adept at creating surreal visions in “Eternal Sunshine of the Spotless Mind

,” and “Science” promises to warp reality even more. Here’s our list of ten dreamy movies supporting the idea that no other artform is better suited to display the products of our subconscious imagination.

” was revealed to be nothing but a dream (in order to facilitate the return of a character who was killed off the previous year), fans were outraged. But so what? One of the most beloved films of all time is nothing but a dream of its main character. When Dorothy (Judy Garland) awakens from her Technicolor vision of the yellow-brick-laden land populated with flying monkeys, talking scarecrows and lollipop-pushing munchkins, she realizes that there is, indeed, “no place like home.” But why doesn’t she ask what the heck everyone’s doing in her bedroom?

9) The Night Walker (1964)
In one of legendary B-movie producer William Castle’s less schlocky outings, Barbara Stanwyck plays a woman who can’t sleep though the night without having horrific dreams about a man without a face (a common image in film nightmares) trying to woo her away from her jealous, blind husband who was recently killed in a lab explosion. The stark black and white cinematography and low-budget effects of Castle’s films work incredibly well in the context of surreal dream imagery.

(1995)
In this French science fiction film, a scientist named Krank has become prematurely aged due to an inability to dream. He kidnaps young children and develops a way to steal their dreams, hoping to restore his youth. The fly in the ointment is that kidnapped children rarely have sweet dreams, and the nightmares of the kiddies don’t do Krank much good in the end. As dark as Tim Burton’s wardrobe, this movie is not recommended for children who still believe in Santa Claus (just trust us).

(1984)
The government funds a research project that allows psychics to invade people’s dreams and manipulate their behavior. All for the benefit of humanity, right? Suuuuure it is. Dennis Quaid plays a man who has to follow psychic assassins into the nightmares of the President of the United States (Eddie Albert!?) to save his life. Oh, and there are giant post-apocalyptic snakes, too!

6) A Nightmare on Elm Street

(1984)
You do not wanna take too many naps on Elm Street. Not with razor-gloved serial child-killer Freddy Krueger hiding out in your dreams, waiting to come up with some really yukky method of dispatching you. Craven’s stylish original (featuring the screen debut of Johnny Depp) manages to evoke a creepiness that none of the subsequent sequels quite matched. Then again, it’s hard to have a nightmare about someone once he’s turned into a lunch box. 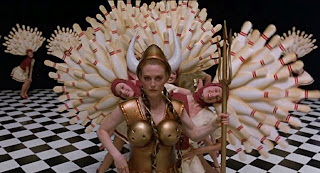 (1998)
While all of the Coen brothers’ films create worlds where the view’s askew, the dream sequences in their 1998 fable about bowler-slacker Jeff “The Dude” Lebowski (Jeff Bridges) score a 300. Try to imagine bowling pornography that includes a Busby-Berkeley-Meets-Wagner musical number and Saddam Hussein giving out shoes. A couple White Russians might help get you in the right frame of mind. Get it? Frame? Bowling humor!

(1990)
Ostensibly based on actual dreams of the iconic Japanese filmmaker (we remain skeptical), “Dreams” is comprised of eight segments dealing with life, death, love, loss, beauty, war, art and nuclear holocaust. “Dreams” is full of wild, vivid imagery, yet the most unrealistic aspect of the movie is the bizarre casting of Martin Scorsese as Vincent Van Gogh. Strangely, there’s no segment about giving a speech to a large group of people while naked.

,” Lula (Laura Dern) is haunted by dreams of her father’s fiery death and visions of her mother as the wicked witch of the west. “Twin Peaks: Fire, Walk with Me

, continues that show’s heavy usage of disturbing dreams to not only supply clues to FBI agents, but add to the overall unsettling feel of the work.

In fact, a number of Lynch’s films contain sequences that blur the line between the story’s internal reality and the surreal, causing confusion among some, giddy delight in others. How much of “Lost Highway

” (2001) is real and how much represents the fevered dreams of their tortured protagonists? Don’t look for DVD audio commentary insight from the director… he famously refuses to offer any insight into his films’ meaning, leaving interpretations up to the viewer. 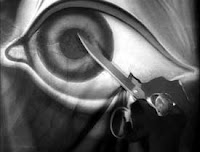 (1945)
While not one of Alfred Hitchcock’s masterpieces, “Spellbound” is noteworthy for its dream sequence, designed by surrealist master Salvador Dali

. Mixing live action with mattes of Dali paintings and sets designed by the artist, “Spellbound” creates perhaps the most artful depiction of the subconscious in film history (even if the plot that surrounds it is psycho-babble). Dali’s trademark giant drooping eyes, distorted wheels, faceless men and enormous otherworldly landscapes come to life in an incredible live translation of the artist’s work.

,” the main difference is that “Waking Life” was animated using a computer graphics version of rotoscoping. The effect of the impressionistic artwork laid over sometimes mundane, sometimes profound (and yes, sometimes pretentious) conversations is almost intoxicating. Different animators utilize different styles throughout the film to add to its off-kilter ambience. by the end of the movie, as Wiley’s unnamed main character realizes he CAN’T awaken, you may begin to question if your life is also nothing but a dream…! Okay, that’s a stretch, but the film is mind expanding.

My kind of post, sir, as I am obsessed with dreams. I just watched a terrible pseudo horror film called Parasomnia that had some dream stuff in it. A terrible, idiotic script but with a few inspired visuals.