Movie check in aisle ten (the retail experience in film)!

Dane Cook’s destructive behavior in “Employee of the Month

” would no doubt get him fired at an actual store, but businesses in movies are far more forgiving than their real life counterparts. As the following ten films depicting the retail experience show, in Hollywood, the customer is definitely NOT always right!

(2005)
Claire Danes plays Mirabelle, an aspriring artist who toils at the anachronistic formal glove counter at Saks Fifth Avenue in L.A. Mirabelle finds herself torn between two men, Ray (Steve Martin, who adapted the film from his 2001 novel

), a wealthy, older logician and Jeremy (Jason Schwartzman), a young artist / roadie / speaker salesman. The perception of retail work as aimless and transitional plays into the lack of respect Ray affords Mirabelle, keeping her at arm’s length until she finally chooses Jeremy. When Mirabelle goes on to become a successful artist, Ray finally realizes that a person is usually not defined by what they do for a living (Donald Trump notwithstanding).

(1987)Okay, see if you can follow: Jonathan (the always-bland Andrew McCarthy) is a sad, struggling sculptor who can’t keep a job. Jonathan builds a mannequin for a local department store. Jonathan falls in love with the mannequin and gets a job at the store so he can be close to it. The mannequin comes to life as the reincarnation of an ancient Egyptian princess named Emmy (Kim Cattrall). Jonathan and Emmy team up to create amazing window displays and earn the ire of competing stores. Oh, and they fall in love. Yeah, we don’t get it either. 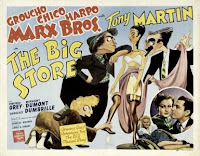 (1941)
In the Marx Brothers’ penultimate picture, Groucho plays Wolf J. Flywheel, a private detective hired to protect a department store heir after a number of suspicious accidents. While not one of the legendary trio’s better films, “The Big Store” does contain some memorable set pieces, most notably a scene in the sleep department involving child-eating modern bunk beds and a wild chase on roller skates through the store (hampered by the obvious fact that it was done by stunt doubles). Still, it’s better than “Mannequin!” Man, we just don’t GET that!

,” Championship Vinyl, the indie record shop owned by Rob Gordon (John Cusack) in “High Fidelity” rings completely true. Staffed by misanthropic music snobs, plastered with promo posters and stickers and struggling financially, it’s a safe haven for the music-obsessed few, an uninviting hornet’s nest for anyone clueless enough to walk in looking for Stevie Wonder’s “I Just Called to Say I Love You.” If you’ve ever gone looking for an out-of-print Smiths single, odds are you know a store like Championship… for better or worse.

(1998)
As a rule, we’re not fans of the goopy chick-flickery of Nora Ephron, but in the context of retail-on-film, we’d be remiss if we didn’t list her remake of 1940’s “The Shop Around the Corner

.” While the original James Stewart – Margaret Sullavan comedy (about a pen-pal couple who fall in love through the mail without realizing they know – and dislike – each other in real life) is a better movie, the updated e-mail version adds the very modern concept of megastores crushing mom and pop retail. Tom Hanks plays Joe Fox, the president of Fox Books, a huge chain that opens a new store on New York’s upper west side, near the tiny bookshop owned by Kathleen Kelly (Meg Ryan, of course). As Joe and Kath’ electronically fall in love via anonymous e-mail, Fox Books quickly puts the tiny family-run bookshop out of business. Call us cynical, but that makes the inevitable happy ending (Nora Ephron, remember?) just too much to buy… even at a superstore 35% discount.

(2002)
There’s something strangely depressing about catch-all discount stores like the fictional Retail Rodeo in this angst-fueled dramedy. Perhaps it’s the distillation of consumerism, being able to buy everything from underpants to dessert to furniture in one stop. Or maybe we’ve become so label conscious that the endless mosaic of the unfamiliar (and often bland) design of off-brand products creates a subliminal dulling effect on our psyches. Regardless, imagine how soul-sucking it must be to WORK in such an environment. Maybe that’s why 30-something, married, bored clerk Justine (Jennifer Aniston) allows herself to have an affair with slightly crazed teenage stockboy Thomas (Jake Gyllenhaal) who thinks he’s “The Catcher in the Rye

” hero Holden Caulfield. If you think nothing good can come of this, you’re right.

(2002)
As anyone who’s ever taken a roll of 35mm film with embarrassing pictures to a photo lab knows, it can be a nerve-wracking transaction. The idea of strangers looking at your pictures is taken to a frightening extreme in this thriller. Robin Williams plays Sy, SavMart’s film developer, a lonely man who becomes obsessed with picture-perfect suburban family the Yorkins through their bucolic snapshots and friendly interaction. All Sy wants is to be part of the family, but as he begins stalking the Yorkins, he comes to realize that nothing is perfect. The movie could be used by digital camera manufacturers as cautionary propaganda… Go digital and never worry about people making copies of your naked pictures again! Or, you know, trying to kill you. 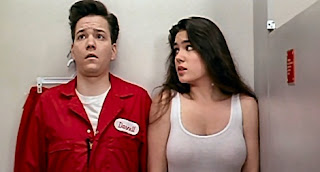 (1991)
Ever wonder what it would be like to be alone with a cute girl overnight in a Target? Night Custodian Jim (Frank Whaley) stumbles across bored bad girl Josie (Jennifer Connelly… sigh) asleep in a dressing room and wacky roller skating fun ensues… at least until two gun-wielding thieves spoil it. The movie (written by John Hughes) has long been known primarily for the pulchritudinous assets of Miss Connelly, but in recent years it’s become a glimpse into what a Target looked like long before it became the retail outlet of choice for hipsters.

(2003)
While the two Santas in these dichotomous Christmas movies couldn’t be more different, the one thing they have in common is that they both decry the crass, opportunistic greed inherent in the running of a huge department store. Imagine “Bad Santa”’s Willie (Billy Bob Thornton) being attacked by the evil store psychologist of “Miracle”… It’s doubtful the quack would’ve gotten off with a mere cane-rap on the head. Conversely, we’d wager that even the amoral Marcus (Tony Cox) could’ve been shown the error of his ways by filmdom’s greatest Kris Kringle, “Miracle”’s perfectly-cast Edmund Gwenn. Hey, maybe Thornton and a CGI-created Gwenn could team up and battle Wal-Mart in a sequel to both films!

Who’s Minding the Store? (1963)
Yes, it’s a Jerry Lewis film, and no, we’re not kidding; It’s side-splittingly funny. Looney Tunes animator-turned director Frank Tashlin helms this raucous tale of Norman Phiffier (Lewis), a dog walker in love with Barbara (Jill St. John), the elevator operator at Tuttle’s department store. When Norman’s hired by Mrs. Tuttle to do odd jobs at the store, he doesn’t realize her ulterior motive is to break his spirit and make him look bad in front of Barbara, who (unknown to Norman) is a Tuttle herself, the heir to the family fortune. But Norman is resilient and spirited and nothing can break him; Not the lady wrestler trying on shoes three sizes too small, nor the malfunctioning, omnivorous vacuum cleaner, nor even a forkful of fried ants. The slapstick is broad and the film contains some pretty dated gender stereotypes, but (as with all of Tashlin’s films), there’s a heart and soul beneath the buffoonery that gives it a true resonance.