” adds to the sizable cinematic roster of secret agents, but it seems unlikely Alex will age as well as James Bond. With all due respect to the teenage Alex (Alex Pettyfer), as well as the Spy Kids, Agent Cody Banks and Harriet the Spy, espionage is a job best left to the grown-ups.

It’s just that there are certain aspects of the job that aren’t for the kiddies… and they mostly involve vice in one form or another. Spy work is (or was) inherently sexy, suffused with danger, deception, stealth and cool. Need proof? Okay, here’s a list of the ten coolest spy flicks of all time… and note that with only one exception, they’re all at least as old as your parents~!

(aka Spies) (1928)
This silent-era Fritz Lang film officially inaugurated the entire secret agent genre. Every classic spy flick element, from the dashing, numbered secret agent to the femmes fatales, replete with stunts, gadgets and international intrigue are all here. Told via a series of vignettes, “Spione” follows Agent 326 (Willy Fritsch) as he tracks the criminal mastermind Haghi (Rudolf Klein-Rogge). 326 even seduces a sexy enemy agent from the dark side. Stylish, sleek and years ahead of its time, “Spies” is an overlooked masterpiece from the director of “M

(1990)
French filmmaker Luc Besson can make gun toting look more suave than deadly, and this 1990 spy thriller set a tone that carried into American films that followed. Anne Parillaud plays the title role, a teenage drug addicted convicted murderer who’s given a second chance by the French government. Sensing a killer instinct combined with a nihilistic viewpoint, Nikita is trained to become a government assassin, a job at which she proves adept. The stylish thriller inspired an American remake, “Point of No Return

, but neither captured the smoky, azure ambience of the original. 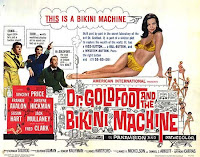 8) Dr. Goldfoot and the Bikini Machine

(1965)
Vincent Price plays the evil Dr. Goldfoot, a mad scientist who creates an army of bikini-clad vixen-robots (call them Fembots if you must) who seduce and rob wealthy men. Enter bumbling secret agent Craig Gamble (Frankie Avalon) who attempts to foil the scheme while keeping his hair in place. Notable for a cool claymation opening sequence by Art (Gumby) Clokey and a killer theme by the Supremes, “Dr. Goldfoot” simultaneously parodies the spy genre and the beach movies of that most swingin’ decade.

7) On Her Majesty’s Secret Service

film on this list, but you may be surprised to see the lone installment starring the unfairly maligned George Lazenby. But OHMSS is perhaps the most involving Bond film of all, showcasing a man who’s way more than a cartoon character. Lazenby’s 007 suffers through a true moral dilemma and the greatest tragedy in any Bond flick. On top of that, love interest Tracy (Diana Rigg, also known to spy fans as Emma Peel from TV’s “The Avengers) is one of the most underrated of all Bond girls and Telly (Kojak) Savalas makes for the swankiest of all the Blofelds.

(1965)
Despite sharing some key behind the scenes players with James Bond – including producer Harry Salzman and production designer Ken Adam – “The Ipcress File” is considered by many fans of the spy genre to be the antithesis of the 007 series. Decidedly more downbeat and realistic, the film stars Michael Caine as Harry Palmer, a British agent investigating the kidnapping and brainwashing of several scientists. The movie’s emphasis on the bureaucracy and drudgery inherent in the espionage biz couldn’t be farther from the swanky world of Aston Martins and martinis that Bond inhabits, but the movie retains a horn-rimmed style all its own. Caine would reprise the role of Palmer in two more (albeit less memorable) films.

(1965)
It’s undeniable that Derek Flint was far more of an inspiration to Mike Myers than James Bond. As played by the always-cool James Coburn, the agent of ZOWIE manages to be even campier than Austin Powers while playing it completely straight. In this first of two superspy installments, Flint (whose super-agent abilities include the power to talk to dolphins) must defeat a group of scientists who are manipulating the weather to extort world control from all the Earth’s governments. Their sinister plot also involves turning women into “Pleasure Units,” a recurring theme in a number of these films. If you wanna see the origin of “shagadelic,” look no further than the Flint flicks.

Of the four Matt Helm movies starring the super-suave Dean Martin, “Murderer’s Row” has a slight edge over the others due to one key element: the slinky, sultry Ann-Margret. Opening with a faked bathtub demise for the secret agent, the movie follows Helm as he drinks, tracks the evil Dr. Solaris, inventor of the Helium Laser, drinks, and wins the trust and aid of Suzie Solaris (Miss A-M), the confused daughter of the evil genius. Oh, and he drinks, too (did we mention that?), enough that Helm could probably put Bond under the table. No small feat, that.

(1966)
In all honesty, this adaptation of the British comic strip

about a female secret agent is not a great movie. But it contains so many incredible visual and sonic elements that it’s gotta make the list. Italian actress Monica Vitti plays the sexy super-spy, a woman who can change her appearance with the snap of a finger, who swings through a psychedelic world of espionage with Terence Stamp (General Zod of “Superman II”) as her seemingly bored sidekick! Aided by a great jazz score by John Dankworth

, “Modesty Blaise” is best enjoyed with a large group of people, copious cocktails and a dearth of expectations.

(1946)
Alfred Hitchcock toyed with espionage in many films, from “The Man Who Knew Too Much

” (1966), but this 1946 thriller is one the master’s best. Cary Grant plays T.R. Deviln, an American agent who convinces Alicia Huberman (Ingrid Bergman), the disgraced daughter of a convicted Nazi spy, to help gather information against a group of Nazis who have relocated to Brazil at the end of WWII. Things get complicated when Alicia and Devlin fall in love, even as Alicia goes so far as to marry one of the Nazis to further infiltrate their group. Leopoldine Konstantin is utterly chilling as the jealous, suspicious mother in law of the newly minted spy, and Grant and Bergman (two actors who couldn’t scrub off the cool with an acid bath) were never better.

(1964)
The best Bond? That’s a debate that will rage forever, but the COOLEST Bond? Well, Connery, to be sure, and this, the third 007 film in the series, congealed every iconic element that’s made this the most successful franchise in movie history. The gadgets, the quips, the impossibly named babe (Pussy Galore), the cartoony yet threatening bad guys (Oddjob and his deadly bowler), Q, the Aston Martin, it’s all here. Bond flms may have gotten bigger and, yes, better (see #7 above), but they… nor any spy film, for that matter, ever got any cooler.

The main reason the spy genre works best in the past is that espionage was sexy back then. Our enemies (and those of our allies) were clear cut, the goal was simple: Save the world from evil. Plus, many of the inherent attitudes in spy fiction work better in the less politically correct past. Also, modern technology has made espionage much easier, and hence, less dangerous (read: not nearly as sexy). Heck, as evidenced by Alex Rider and his adolescent cronies, spying has gotten so easy…. Even a kid can do it.
____________________________________________________
ORIGINALLY POSTED in REWIND on MTV.COM, October 2006
Posted by Pops Gustav at 11:16 PM