Is it okay if Marie Antoinette likes the Strokes?

.” The titular 18th century French Queen (Kirsten Dunst) sports pink Converse high tops and rocks to the sounds of the Cure, New Order and the Strokes

(as well as more time-appropriate pieces by Vivaldi and Rameau).

Coppola has stated that her intent with “Marie” is not to present a historical drama, but a personal portrait of a teenager who found herself thrust into adulthood, marriage, a new citizenship and ruling status! That’s a lot for anyone to carry on her shoulders (for a while, anyway). “Lost in Translation

” proved that Coppola is a visionary, but the use of music out of time or place in a film is one of the medium’s most difficult hat tricks.

Perhaps the earliest example of intentionally anachronistic music was Pier Paolo Pasolini’s 1964 Biblical epic, “The Gospel According to Saint Matthew

.” The Italian film uses music as varied as Bach violin concertos and African American (or, “Negro” as the term went) Spirituals in its otherwise faithful interpretation of the Gospel tale.

Pasolini was a visionary, but it would take decades for his radical use of music to become more widespread.

,” directed by Tom Dey and starring Owen Wilson and Jackie Chan, is not your grandpa’s cowboy flick. It may be set in Nevada in the late 1800s, but the movie is a genre stew, integrating elements from Kung Fu films, ‘80s buddy pictures, cop films and music videos. To that end, it’s liberally scored

with contemporary rock songs by the likes of ZZ Top, Aerosmith and Kid Rock. It could be that the film’s mélange of ingredients caused the radical soundtrack to be overlooked, at least in comparison with the film that’s considered the benchmark of anachronistic music in movies.

” received mixed reviews, but every one of them pointed out the pervasive use of rock music to score

the tale of the jousting peasant William Thatcher (Heath Ledger). By using songs like Queen’s “We Will Rock You,” War’s “Low Rider” and Thin Lizzy’s “The Boys Are Back in Town,” the movie drew a much younger demographic than most period pieces, and suddenly anachronistic soundtracks became a formula. 2003’s sequel to “Shangai Noon,” “Shanghai Knights

” pushed the music envelope even further, including songs by the Who, the Zombies, Roger Miller and the New Vaudeville Band! 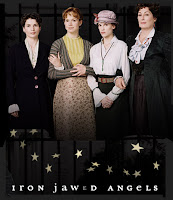 But the formula doesn’t always work. Set during the women’s suffrage movement of the early 20th century, the 2004 HBO movie “Iron Jawed Angels

” features a ton of anachronisms, from 50-star US flags to clothing and hairstyles that were definitely not of the time. While (unlike the pink high tops of “Marie Antoinette”) those goofs were not on purpose, the very contemporary score (featuring the likes of Sarah McLachlan, Lauren Hill and Vertical Horizon) and the, ahem, MTV-style cutting of the film were intentional decisions by director Katja Von Garnier. But the film never quite gels. The very modern mannerisms of a fine cast (including Hilary Swank and Molly Parker) further add to a film whose disparate elements end up working against themselves.

Of course, all reality goes out the window when the film is a musical (after all, when was the last time you saw a scarecrow and a tin man lock arms and sing and dance?). Musical fairy tales like the “Shrek

” sound as if they were scored by putting an iPod on random, with no detriment other than forcing the viewer to have to listen to Smash Mouth one more time. But even in a movie like Baz Luhrmann’s “Moulin Rouge!

,” there’s nothing jarring about the juxtaposition of hip hop music in a 1930s setting because, well, it’s a musical starring OutKast. What do you expect?

Sometimes it’s not the songs that are out of time, but the performer. The stunt casting of musicians in period films usually feels awkward. A mandolin-strumming Jack White is so out of place in 2003’s Civil War melodrama “Cold Mountain

” that he might as well be wearing red leather pants. The many musical cameos

” (2004) distract from the film’s otherwise believable 1930s setting. And in this year’s “The Black Dahlia

,” k.d. lang cameos as a torch singer at a 1940s lesbian nightclub, which isn’t much of a stretch, but still strains the film’s period credibility.

This is not to say that musicians can’t act (Tom Waits is always great, but we’re reserving judgment on Keith Richards). But the image of most rock stars, inexorably tied to their music, can be hard to look past in a film, and it’s darn near impossible if they’re literally playing (or singing) against type. 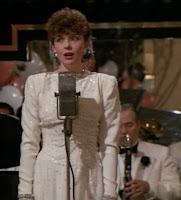 Whether it’s fair or not, it’s easier to accept an actor as a period musician. Diane Keaton’s bit part in Woody Allen’s “Radio Days

” (1987) as a 1940s nightclub singer was a lovely cameo, surprisingly touching and completely believable within the context. However, if Woody had cast, say Debbie Gibson or Tiffany, the film’s internal believability would’ve been thrown out.

Arguably, some music is timeless, be it Beethoven, Gershwin, Satchmo or Sinatra. It’s too soon to say if The Strokes fit into that category (we have our doubts). But anachronistic music is likely to become more commonplace in film partially because technology has made ALL music contemporary (if not timeless). Almost everything ever recorded is now available, be it via CD reissue, digital download or a rare 78 tracked down on eBay.

The best filmmakers pay as much attention to their scores as any other aspect of the art. Auteurs like Allen

, Wes Anderson, Quentin Tarantino and yep, Sofia Coppola work closely with music supervisors to select music (both original and archival) that enhances their larger vision. And if that music turns out to be something that the film’s characters wouldn’t… or COULDN’T possibly know, does that really matter?

If the music enhances the film, then what’s the harm? Nobody cries foul when films are scored with music that’s decades or centuries OLDER than their setting, and isn’t that equally anachronistic? Samuel Barber’s “Adagio for Strings” is one of the few non-period pieces of music in Oliver Stone’s Viet Nam epic, “Platoon

Frankly, we’re far more disturbed by corporate-cobbled synergistic soundtracks that shoehorn ill-fitting music by struggling artists on the studio’s sister record label into a film. That’s business dictating art and it often is at best irrelevant to, at worst at odds with the production. Especially compared to that kind of intrusive scoring, the notion of Marie Antoinette and Louis XVI cavorting to New Order’s “Ceremony” strikes us as pretty darn smart.