calls them America’s greatest threat. Yet every day, stuffed toy versions of them are given to children and adult women with boyfriends of poor gifting abilities. They are BEARS and this week’s “Open Season

” is the latest film featuring Carnivora Ursidae. So what’s the deal on bears? Are they friend or foe?

” and Little John from that studio’s 1973 animalized “Robin Hood

.” In fact, bears may be outnumbered only by dogs and cats in the world of animation. 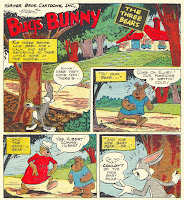 ” (1944) pits the wascally wabbit against a bellicose bear clan who proved popular enough to return for two more outings. In 1966, “Winnie the Pooh and the Honey Tree

” (2003), was one of their last 2D animated films. In ancient North America, a young Inuit boy named Kenai (the voice of Joaquin Phoenix) kills a bear to avenge the death of his brother, only to be magically transformed into a bear himself. “Brother Bear” received mixed reviews, but its relative lack of overly cute characters combined with a sensitive handling of difficult subject matter shows a respect for the kids lacking in most contemporary children’s films. 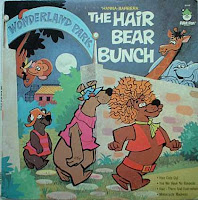 Saturday morning TV bears evolved over the years, becoming ever more distant from their real life counterparts. In the swingin’ 1960s through the ‘70s, cartoon bears, while not exactly deadly, were at least somewhat of a threat to mankind. Yogi Bear

was stealing pic-a-nic baskets from Jellystone Park campers. “Help! It’s the Hair Bear Bunch” was about a group of groovy zoo-bound bears with afros and vests who made life miserable for Mr. Peevley, the Wonderland Zookeeper. And during the commercial breaks, the smooth-talking turtlenecked Sugar Bear kept the kids all hopped up on Super Sugar Crisp, back in the days when cereal proudly boasted its sugar content.

Sugar Bear’s 30 second adventures were actually preferable to what came in the ‘80s and beyond as TV bears became pastel-colored saccharine cuddlekins on shows like “Kissyfur,” “The Care Bears” and “The Gummi Bears” (an adaptive stretch matched only by cartoons for Pac-Man and Rubik the Amazing Cube). Stan and Jan Berenstain’s beloved children’s books were turned into moralistic “Berenstain Bears” series as was the Pooh-esque “Little Bear.”

But it’s not just cartoon bears that are cuddly.

It’s not that much of a stretch to include the Ewoks in this discussion, as those darn furballs from “Return of the Jedi

” (1983) are really nothing but glorified teddy bears, tailor made for merchandising! Bringing a pathetic coda to the six-part “Star Wars” series, the only good thing about the Ewoks is at least they were vicious little teddies!

In 2002, Disneyland’s animatronic Country Bear Jamboree was awkwardly turned into “The Country Bears

,” a live action film about a young cub (Hayley Joel Osment) raised by humans who tries to reunite the long disbanded legendary country group. Sort of like “Behind the Music” meets “The Jerk” starring people in bear suits, let’s just say the movie was no “Pirates of the Caribbean.”

As for REAL bears, on the tube, TV shows “Gentle Ben” and “The Life and Times of Grizzly Adams

” both featured 600-lb. bears as docile best buddies to their main characters. On the big screen, “Alaska

” (1996) teams two teens with a polar bear in an attempt to rescue their father, lost in the wilderness. 1999’s “Grizzly Falls

” is about a boy who befriends a bear and helps her rescue her captured cubs. No, really.

” have little in common with each other besides similar titles and lots of shots of the world’s cutest animal.

But what about those “godless killing machines” that Colbert warns against?

” stars Christopher George as a Park Ranger out to catch an 18-foot vicious man-eater! The movie is so blatant in its attempt to cash in on “Jaws

” mania that it rips off entire scenes and characters. But with a tiny budget and a marked lack of talent both in front of and behind the camera (we mostly see the bear from its perspective), the best part of “Grizzly” is its poster by comics legend Neal Adams

One year later, George would face off against an entire forest of creatures driven to murderous frenzy by the depletion of the ozone layer (how prescient!) in “The Day of the Animals

.” This movie is most notable for an unintentionally hilarious scene in which a crazed, shirtless Leslie Nielsen does hand to claw battle with a grizzly (no, he doesn’t win).

” (1979). Robert Foxworth plays an environmentalist who moves to Maine to investigate industrial pollution and finds that not only have the raccoons become deadly, but there’s an enormous mutated bear stalking the woods. A 25 foot, goopy, latex bear that can run really fast. A throwback to B-horror films of the ‘50s, the freakiest thing about “Prophecy” is that it was directed by John Frankenheimer, the same man who made the Cold War classic, “The Manchurian Candidate

In Jean-Jacques Annaud’s “The Bear

” (1988), an orphaned cub becomes the sidekick to an adult kodiak bear trying to avoid those darn human hunters. The almost dialogue-free movie is a strange mixture of tone, combining naturalistic cinematography with anthropomorphic animal behavior. Which is probably better for the kids than if the adult bear had acted more realistically and eaten the little teddy.

Perhaps the most frightening fictional bear flick is the 1997 psychological thriller, “The Edge

.” Written by David Mamet, it’s as testosteroney as you’d expect. Alec Baldwin plays a scalawag photographer who’s fooling around with the hot young wife of older billionaire Anthony Hopkins. After a helicopter crash leaves the two rivals stranded in the Alaskan wild, their pissing contest takes a back seat to survival due to a nasty Kodiak bear that’s tracking them. Mamet’s usual themes of masculinity, manipulation and competition are taken to a life-threatening extreme and the scenes with the bear are dazzling and truly terrifying.

” follows Canadian, um, “eccentric” Troy Hurtubise as he builds a “suit of armor” that will allow him to do battle with actual grizzlies. The suit looks like something out of a low budget superhero movie, and it may actually be for the best that the film ends without our hero ever confronting an actual bear.

.” It’s a powerful, heartbreaking look at Timothy Treadwell, an obsessed environmentalist who loved the giant animals so much that he recklessly interacted with him during his summers studying bears in Alaska. Treadwell’s belief that the animals knew he was their friend leads to an almost inevitable, tragic conclusion. Alternately exhilarating and agonizing, “Grizzly Man” inspires fiery debate about mankind’s relationship with nature.

Maybe Treadwell was lulled into a false sense of safety by the prevailing cuddly image of the animals in our culture. Adorable CGI polar bears smile and shill for Coke, cartoon grizzly families use Charmin toilet paper, Smokey Bear pats kids on the head and tells them not to play with matches and don’t forget Snuggle the fabric softener bear.