” is a fictionalized extrapolation of Eric Schlosser’s 2001 bestseller

about the fast food industry. The movie tackles a supersized bucket of issues, from American obesity to the environmental and social impact of commercial farming and the way that chain restaurants take advantage of low-income families, trapping them in both low-paying jobs and unhealthy (but inexpensive) eating habits.

The message is that fast food is (in many ways) bad for you, but movies have a nasty habit of presenting meals that are far less than appetizing. Sumptuous repasts in films like “Big Night

” seem to number far less than examples of food that makes the greasiest Slider seem like Prime Rib. Don’t believe us? Okay, we’ll prove it!

” (1985) serve as metaphors for each individual character: The jock scarfs down enough food to feed a small army, the princess eats a delicate sushi plate, the brain gets nutrients from all four food groups and the neglected bad boy doesn’t have a lunch. But basket case Allison’s (Ally Sheedy) Cap’n Crunch and Pixie Stix sandwich may be the film’s funniest moment (and we’re willing to wager at least a few of you have tried one).

9. Christmas dinner at the Griswolds’
Despite the best intentions of traditionalist Clark Griswold (Chevy Chase), almost nothing in “National Lampoon’s Christmas Vacation

” (1989) goes according to plan, and that includes the big family dinner. His sister-in-law Catherine overcooks the turkey to the point where it bursts into dust when the carving knife hits it and Aunt Bethany’s jell-O mold contains cat food. Cousin Eddie may serve as the family’s taste tester (even if he does use the serving spoon), but Eddie’s not exactly picky. Remember, this is the man who (in the original 1983 “Vacation

”) opined that Hamburger Helper is good enough to eat on its own!

,” transporting inventor Seth Brundle (Jeff Goldblum) accidently merges his DNA with that of a housefly and begins to mutate into a human-insect hybrid. The first indication that something’s changing is a spike in Seth’s energy, fueled by a diet of almost nothing but sugar. But when Seth mutates into “Brundlefly,” his eating habits get downright disgusting: No longer able to chew solid food, Seth spews “vomit drop” onto a donut which liquefies the sweet treat, enabling him to suck it back up (presumably with an unseen proboscis).

7. The Pankot Palace banquet
Not much (besides snakes) fazes dashing archaeologist Indiana Jones

(Harrison Ford). Part of the job is getting to know the rituals and customs of foreign lands. The same can’t be said of Indy’s traveling companions Willie (Kate Capshaw) and Short Round (Ke Huy Quan) in 1984’s “Indiana Jones and the Temple of Doom

.” Invited to a banquet at an Indian palace, Jones and his friends are fed a meal of beetle guts, live eels (served from a sliced open boa constrictor), eyeball soup and a lovely dessert of chilled monkey brains (served in the monkey’s head, of course). How come this movie didn’t have any fast food tie-ins?

6. Hannibal Lecter’s brain food
If Hannibal “the Cannibal” Lecter (Anthony Hopkins) is cooking for you, you probably don’t wanna ask, “What’s in this?” In Ridley Scott’s “Hannibal

”), Hannibal hosts a light supper. In a truly gruesome scene, Lecter removes the top of a lobotomized (but very much alive and conscious) Krendler’s skull, extracts bits of brains, sauteés them in butter and herbs and feeds them to Krendler. Clarice decides she’s not hungry.

5. The thief’s wife’s lover as prepared by the cook
Peter Greenaway’s punctuation-challenged “The Cook the Thief His Wife & Her Lover

” (1989) has some strong things to say about wealth being unable to buy taste. Crude, crass gangster Albert Spica (Michael Gambon) spends every night gorging himself with his friends at a restaurant in which he is part owner. When his abused wife Georgina (Helen Mirren) begins an affair with a patron at the restaurant, Albert finds out and has the lover killed. But Georgina has the last word when she convinces the chef to cook her dead paramour and enlists some of Albert’s enemies to help force him to taste the, uh, fruits of his true nature.

4. Zombie custard
Speaking of cannibalism, we’d be remiss if we didn’t mention something from the zombie genre, with its a la carte menu of brains, limbs and sundry organs. While George Romero’s “Night of the Living Dead

” (1968) set the template, one film grosses out the rest: Peter Jackson’s “Dead Alive

” aka “Braindead” (1992). Lionel (Timothy Balme) and his mum Vera (Elizabeth Moody) play host to a luncheon for the president of the Women’s League and her husband. Vera, having been bitten the previous day by the nefarious Sumatran Rat Monkey, is rotting alive and having a bit of an issue keeping her skin on, while Lionel pretends everything is completely normal. During dessert, Vera picks at her infected bite wound and a bit of bloody pus squirts out into a guest’s custard, which he promptly scoops up into his mouth. “Mmm. Rich and creamy. Just the way I like it,” he announces enthusiastically. Just when you think it can’t get any worse, Vera’s ear falls off and drops into her own custard. Yes, she eats it. Sometimes there’s not always room for dessert.

3. Spaghetti and wafer-thin mints
Sometimes it’s not what you eat that makes you sick, but how much. In two movies that couldn’t be more different from each other, overeating leads to different, yet equally disgusting ends. By far the most indelible sketch in “Monty Python’s The Meaning of Life

” (1983) takes place during “The Autumn Years,” in which the unpleasant and enormous Mr. Creosote (Terry Jones) embarks on a regular gorging at a restaurant, abetted by vomit buckets at the table. Disgustingly conspicuous consumption seems unstoppable… until a wafer thin after-dinner mint brings about an explosive conclusion. And in David Fincher’s “Se7en

” (1995), the first of the deadly sins to be made flesh is Gluttony. An obese man is forced to gorge on pasta until his stomach is vulnerable to rupture from a simple kick in the (sizeable) belly. Vomit and cockroaches only enhance a scene that makes you wanna speed past the Olive Garden on the way home. 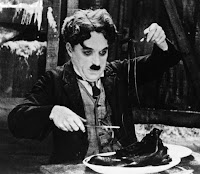 ,” Charlie Chaplin’s Little Tramp travels to Alaska to join in the Klondike gold rush. In one of Chaplin’s most iconic scenes, he and a fellow prospector, trapped in a snow-bound cabin, dying of starvation, cook one of the little tramp’s shoes and share it as a delicious meal. Chaplin treats the boiled boot as a true delicacy, twirling the laces like spaghetti and sucking the boot nails like chicken bones. The scene was recreated for real in “Werner Herzog Eats His Shoe,” a 1980 short chronicling the German director’s fulfillment of a bet to documentarian Errol Morris.

1. Divine’s dessert
You knew we were going to end on this, didn’t you? John Waters’ “Pink Flamingos

” (1972) may be his signature film, if for nothing else than the climactic scene in which Babs Johnson (Divine) cements her status as the “filthiest person alive” by actually eating – for real – on camera – no lie – genuine dog feces. There are other scenes involving things you wouldn’t want to ingest (like meat smuggled in Divine’s “private oven” and a chicken killed on camera), but nothing in the history of film has ever been less appetizing than Divine’s sidewalk snack. Austin Powers may have downed a glass of diarrhea in 1999’s “The Spy Who Shagged Me

” (“Nutty!”), but even Mike Myers would never commit to a character to the extent of ingesting actual waste like Divine did.