The 10 most angsty guys in movie history

As if Zach Braff’s character in “Garden State

” didn’t have enough angst, now he’s playing a 30 year old with a crisis in “The Last Kiss

.” Should he commit to a (supposedly) life long relationship with his girlfriend or have a fling with the hot teenager he just met? Does being an adult automatically mean that your life becomes predictable and free of excitement?

And more importantly, will Zach Braff ever play a character that’s not defined by his own anxiety? In honor of the pillow-lipped carrier of the tortured flame, we’ve gathered some company for Zach, the ten most angst-ridden dudes in the history of film (we’ll save the girls for the “Heathers

10) Alvy Singer
Picking the most angsty Woody Allen character is tough, as his entire career is comprised of variations on a tortured theme. But Allen’s most iconic role, stand-up comedian Alvy Singer in his classic 1977 film, “Annie Hall

” set the standard for neurotic, overly instrospective (some would say self-absorbed) lovelorn guys. “Life – full of loneliness, misery, suffering and unhappiness, and it’s all over much too quickly.”

.” But no character of his has more demons than the wine-loving Miles from 2004’s “Sideways

.” Obsessing over his ex-wife, embarrassed by his doting/dotty mother, agonizing over his unpublished novel and freaking out about his friend Jack’s womanizing, Miles is a drunk-dialing mess who seems determined to remain miserable. Ah, but for the love of a good woman and a bottle of Pinot Noir…

8) Lyle Talbot aka The Wolf Man
Of all the classic Universal horror monsters, only “The Wolf Man

” (1941) truly felt remorse over his victims. Every time poor cursed Larry Talbot awakes the morning after the full moon, he’s fully aware that he spent the night before ripping and tearing through some poor gypsy or innocent Welsh girl. Actor Lon Chaney Jr.’s perpetual hangdog look greatly adds to the amazing amount of empathy the film elicits for someone who chews on people.

7) Robert Cole
If you want to know why so many comedians worship at the altar of Albert Brooks, you need go no further than 1981’s “Modern Romance

,” a sort of west coast “Annie Hall.” Beleaguered film editor Robert Cole (Brooks) can’t decide whether he’s more miserable with or without his girlfriend Mary (Kathryn Harrold). Robert’s attempts to break up with, get over, win back and keep Mary are so agonizing to watch that he makes Larry David look calm and collected.

6) Martin Blank
One of the most angst-inducing scenarios of all is a deep hatred of your job, regardless of how successful or proficient you’ve become. In “Grosse Pointe Blank

” (1997), professional hitman Martin Blank (John Cusack, no stranger to tormented characters) has just about had it. A rival assassin is bugging him to join a union, the feds are after him, yet another killer is gunning for him over the accidental death of a target’s dog, his ten year high school reunion is making him feel old and he’s just been hired to off the father of his long lost love, Debi. And to top it all off, his therapist refuses to return his calls! It’s enough to make you wanna KILL someone…

5) Cameron Frye
Every teen film features at least one character who is gripped with perpetual angst, but few resonate as powerfully as Cameron (Alan Ruck) in 1986’s “Ferris Bueller’s Day Off

.” While his best friend Ferris (Matthew Broderick) seizes every opportunity to live life to its fullest, Cameron lives a life of hesitancy, terrified of consequence. Even in his few moments of happiness, Cameron seems a decade older than his age (and not just because Ruck was 29 at the time), like he’s just waiting for impending doom. It takes the destruction of the only thing his controlling father loves to bring an existential epiphany to the tortured teen, one that we hope took root (we always liked Cam’ way more than the obnoxious Ferris). 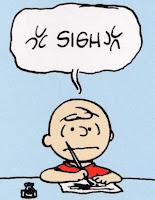 4) Charlie Brown
Granted, Charlie Brown’s film career is tertiary to his work in the comic strips and on television, but he retains all gloom and doom in his movies, from 1969’s “A Boy Named Charlie Brown

” through 1980’s “Bon Voyage, Charlie Brown! (And Don’t Come Back!).” On an exchange student trip to France, who but Charlie Brown could end up at The Chateau of the Bad Neighbor? Still, while in a constant state of angst over his lousy baseball team, poor kite flying ability or that darn little red haired girl, at least Charlie Brown never gives up. Gotta admire the blockhead.

” (1999) doesn’t have a name, all the better to point to his facelessness in a world of blind consumerism. The narrator (as he’s called in the book by Chuck Palahniuk

) hates his job, his materialism, and his cookie-cutter life so much that he becomes a chronic insomniac. Actually, that’s the least of the Narrator’s angst-fueled problems. Internalized self-loathing and a belief that the American male has become too soft, the Narrator develops a secondary identity, a reckless walking id named Tyler Durden (Brad Pitt) and invents Fight Club, a physical manifestation of his (and others’) anxiety and frustration. And that’s just the nutshell!

2) Batman
Yes, Spider-Man has some issues and the X-Men often feel alienated from the rest of the world. But no superhero can hold a candle to the obsessive angst of the darknight detective. The only unifying element in all “Batman

” movies since Tim Burton’s 1989 dirge is that every version of Bruce Wayne (even George Clooney) is carrying the weight of his parents’ murder on his padded shoulders, giving up a normal life to avenge their deaths. Batman

wears black on the outside because black is how he feels on the inside.

1) Jim Stark
“You’re tearing me apart!!!” screams the prototypical angst-ridden teen Jim Stark (James Dean) to his parents in 1955’s “Rebel Without a Cause

.” Widely considered to be the first film to realistically deal with the previously dismissed problems of youth (including a groundbreaking, if subtle depiction of homosexuality in the character of Plato), “Rebel” has lost none of its power in the half century since its release. Dean’s death at the age of 24 and subsequent revelations about his own inner demons have only amplified the iconic image of the troubled kid in the red windbreaker.

But back to Braff. The “Scrubs” star recently announced that this is going to be the last season of his popular sitcom, indicating that he’s ready for full time movie stardom. We like Zach, but think he needs to pick his next role carefully, lest he get stereotyped as the introspective, sensitive guy with inner demons for the rest of his career. Then again, there are worse Hollywood fates than being lumped in with Woody Allen, Albert Brooks and John Cusack. Oh, and Droopy Dog