To oldly go where no man has gone before

Back when the original “Rocky

” was released in 1976, probably not even Sly Stallone himself thought he’d be playing the character thirty years later. “Requiem for a Heavyweight

” aside, not too many movies about heavyweight boxers star senior citizens. But at least “Rocky Balboa

” is ABOUT the fact that the sexagenarian Italian Stallion may well be too old to step into the ring. Hollywood has certainly set precedents that would allow the sequel to completely avoid the issue of Stallone’s age.

The issue of time is a fluid one in motion picture series. While it may take years for a I to stretch into a II and beyond, the story being told rarely matches production time. In the context of character-based franchises like “Spider-Man

,” the characters are supposed to stay relatively the same age, while in something like “Harry Potter,” the maturation of the main character is an integral part of the story. Einstein’s theory of relativity almost feels as if it were designed for movie franchises.

” is unique in that at this point, the films practically piggy-back J.K. Rowling’s books, and the 7th installment is slated to be the final chapter of the young sorcerer’s tale. Since the books follow through the school years and the movies come so quickly, the actors are able to remain age-appropriate to their characters. It’s hard to imagine that at this point even Rowling herself doesn’t envision the films’ Harry, Daniel Radcliffe as she’s pounding at the keys.

But youth is adaptable, and even if takes years to get the final Harry film onscreen, many twenty-something actors can convincingly play both teens and more mature roles. As an actor passes through middle age, the suspension of disbelief can start to strain. Harrison Ford was in his late thirties when he first strapped on the whip and fedora to play Indiana Jones in 1981’s “Raiders of the Lost Ark

,” which is the perfect age for the well-traveled, yet still spry archaeologist. It remained easy to buy Indy’s derring-do in the film’s two sequels over the next eight years, but the prospect of a 64 year old Ford returning to the role in the long-delayed fourth installment feels like it’s pushing it a bit. It’s probably no coincidence that one of the film’s working titles is “Indiana Jones and the Ravages of Time.”

But what about when a character doesn’t age, as in, say James Bond

” (someone should make a movie out of that), the fledgling superspy is described as being in his mid-30s. Today, despite a 40-plus year history of films that outlasted the Cold War, 007 should still be about the same age. Of the six actors who played the character in the official series, George Lazenby was the youngest at 28. But “On Her Majesty’s Secret Service

.” Moore would stick with the character for another six films, making him 58 in his final outing, 1985’s “A View to a Kill

Now, obviously, Bond the character is not closing in on 60 in the film, but movie magic can only go so far and Moore seems in need of more than just the usual Q gadgets to keep going. You can practically hear Bond’s lumbago acting up as he battles Max Zorin (Christopher Walken) atop the Golden Gate Bridge. And with Stacey Sutton (Tanya Roberts) being perhaps the least appealing Bond girl of them all, you have to wonder how 007 kept his reputation in those pre-Viagra days.

But James Bond the icon is bigger than any actor (yes, even Sean Connery) who’s played him. We can accept new faces behind the Walther PPK. But what happens when characters become so identified with their portrayers that their fans would never go for a replacement, no matter how long in the tooth they get?

What happens is you get “Star Trek V: The Final Frontier

.” The 1989 entrant in the series (directed by Captain Kirk himself, William Shatner) finds the Enterprise being hijacked by Spock’s half-brother Sybok (Laurence Luckinbill) in order to breach an energy field known as “The Great Barrier” and reach the planet Sha Ka Ree, the home of… wait for it… God! In fact, “God” turns out to be an evil presence imprisoned on Sha Ka Ree eons ago, but maybe it would’ve been better if the crew of the Enterprise HAD met their maker in this awkward, embarrassing flick. 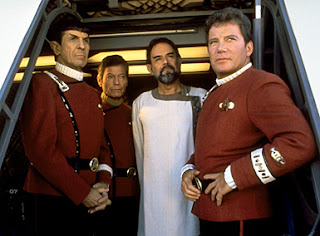 The movie is filled with ill-advised humor at the expense of the crew, almost all of which were pushing (or past) retirement age at this point. They creak through the movie under the constraints of girdles, wigs, caps and layers of wrinkle-concealing makeup. A mountain-climbing Kirk sports a T-shirt under his Starfleet uniform that says (we kid you not) “Go Climb a Rock,” proving that Spencer Gifts still exists in the 23rd century. An overweight, dottering Scotty (Patrick Doohan) actually konks his head on a doorway and knocks himself out. Even the Enterprise itself, despite being a newly commissioned ship (to replace the one Kirk destroyed at the end of “Star Trek III: The Search for Spock

”) is shown as being buggy and clunky, perhaps an unintentioned metaphor for the entire series?

The film was pilloried by the press (as well as the typically more forgiving fans) and the next film, “Star Trek VI: The Undiscovered Country

” (1991) wisely brought a decommission to the original full crew of the Starship Enterprise. And yet It seems as if it took nothing less than the deaths of James Doohan and DeForest Kelley (Dr. McCoy) to finally permit Paramount to recast the original characters in the upcoming reboot helmed by J.J. Abrams (creator of “Lost.”).

Still, Hollywood is so youth-obsessed that there’s probably some karmic balance in the fact that Steven Seagal (at a jowly 55) is still kicking butt and sporting ponytail in action films like this year’s “Attack Force

.” Okay, so it’s a horrible, straight-to-video piece of product that doesn’t add anything worthy to the cultural landfill, but at least he’s not a drain on society!

And it’s undeniable that there’s something reassuring in the idea of Stallone returning to the role that made him a respected artist (remember, “Rocky” won the Oscar for Best Picture in 1977), even if that status was fleeting. It’s more believable in the context to think that Rocky Balboa could step back into the ring in his sixties than to think that the 23 year old Kate Bosworth’s Lois Lane is an established Pulitzer Prize winning journalist with a four year old kid in “Superman Returns