But can Clooney croon? 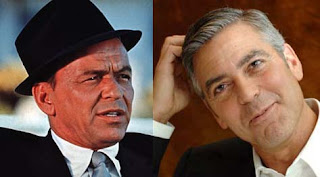 Much has been written about how George Clooney is a throwback to the classic movie stars, a dashing presence respected by his peers, adored by women and envied by men. In “Ocean’s Thirteen

,” Clooney returns to one of his more glamorous roles, that of scalawag thief Danny Ocean. It’s a character that was first played in the 1960 Rat Pack

” by Frank Sinatra, one of those Hollywood icons to which Clooney is often compared. Which gets us wondering, are there other Sinatra movies that could perhaps benefit from some modern day Cloonefication?

After his Oscar-winning, career-rejuvenating turn as the doomed GI Maggio in 1953’s “From Here to Eternity

,” Sinatra was suddenly taken seriously as an actor, and for his next film, chose a dark political thriller. “Suddenly

” (1954) stars Sinatra as John Baron, a killer who invades a family’s home to get a shot at assassinating the President of the US as he passes through their small town. Baron is a bitter, cynical ex-soldier who becomes increasingly irritated by the morality thrown at him from the family held hostage. The movie touches on the kind of sociological and political issues (including some radical ideas for the time about toy guns) that are even more relevant today. It’s perfect Clooney fodder. 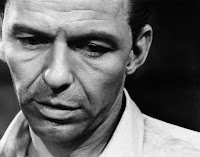 In 1955, Otto Preminger directed Sinatra in “The Man with the Golden Arm

” as Frankie Machine, an ex-con who dreams of resurrecting his drumming career, but gets dragged back into a world of gambling and heroin addiction. The movie was groundbreaking in many ways: the stylistic title design of Saul Bass, Elmer Bernstein’s jazz score

and the stark depiction of addiction (which cost the movie its seal of approval from the Production Code of the time) were like nothing moviegoers had experienced. We’ve seen Clooney play unglamorous roles (specifically “Syriana

”), but Frankie Machine could force him to stretch those acting muscles in an entirely new direction.

” (a musical remake of the much beloved 1940 film, “The Philadelphia Story

”) is the story of wealthy socialite Tracy Lord (Grace Kelly), whose impending marriage to a man she doesn’t really love is complicated by the return of her still-besotted ex-husband and the advances of a tabloid reporter assigned to cover the wedding for a magazine (granted access only in exchange for killing a story about Tracy’s father’s infidelity). Frank plays Macaulay Connor, the reporter, whose disdain for the excesses of the privileged is challenged by his growing affection for Tracy. Clooney’s comfy with the fluff, and paired up with, say, Steve Carell and Josh Lucas competing for Isla Fisher, a film satirizing culture clash, sexual indiscretions and tabloid journalism could work today (although the movie’s message that rich people have troubles too might not go over so well).

Frank Capra’s “A Hole in the Head

” (1959) features Sinatra as Tony Manetta, a widowed single father who runs a Miami hotel, but is endlessly distracted by impractical get-rich-quick schemes and comely female tenants. Tony’s lack of focus just might cost him both his business and his son (who is in many ways more mature than he is), but possible salvation comes in the forms of a wealthy widow and a Walt Disney-esque real estate mogul with some big ideas. The ending is a ludicrous fantasy, all the better for some contemporary tinkering, and no doubt millions of ladies long to see George do the single dad thing again (as he did in “One Fine Day

.” The loose adaptation of Neil Simon’s first play centers on a middle-aged Manhattan playboy whose younger brother Buddy shows up looking for a lesson in swingin.’ Buddy quickly proves such an apt pupil that he starts to steal Alan’s thunder (as well as his women), and the elder Taylor is forced to take a hard look at his lifestyle. Chock full of fabulous babes, glamorous New York City settings, crazy parties and the cutthroat world of plastic fruit sales, there are some ripe possibilities for Clooney to satirize his own image here.

” is primarily a rip-roaring action flick with enough character development and moral ambiguity to keep it interesting. Sinatra plays an American POW who leads a mostly-British group of troops in a break from an Italian prison camp and through Nazi territory. While the film is well regarded, it’s got a bit too much of a Saturday morning serial feel, and could definitely benefit from some post-“Private Ryan” grittiness. Besides, Hollywood will never, ever tire of WWII flicks.

At first thought, it seems as if Frank’s recurring character of Miami P.I. Tony Rome (in the eponymous 1967 film and 1968’s “Lady in Cement

”) would be a good Clooney vehicle, if it weren’t for the fact that those movies are pretty awful. Rome is a cardboard character, a hard-boiled tough guy who spouts Spillaney dialogue when he’s not belting baddies or bedding beauties. And while that leaves endless room for reinterpretation, Clooney seems past the point of trying to launch a franchise, particularly one so predictable.

As for Frank’s musical roles, well, the obvious problem there is that Clooney doesn’t sing. So stepping into Sinatra’s shoes in one of them would seem unlikely. Then again, it’s not like the pipes don’t run in the Clooney family, as his aunt Rosemary was one of the most successful female vocalists of the 1950s. So who knows? Clooney shares many hats with Sinatra: acting (in both TV and film, drama and comedy), producing, directing, political and social activism, and of course a personal lifestyle of which most of us could only dream! Belting out some tunes in a film may be the only path left in which George HASN’T followed Frank.

Consider the gauntlet laid, Mr. Clooney! Bring on the remake of “Can-Can