The thin line between BOO! and OOH! or, Ten Sexiest Monster Movies

The advertising for the new werewolf flick, “SkinWalkers

” is playing up a common, yet often sublimated aspect of monster movies: Sexuality. There’s a distinct correlation between the primal, feral nature of mutated beasts and what happens to humans when we truly give ourselves over to our baser instincts. Over the years, a number of creature features have exploited this similarity to great effect, as our list of the ten sexiest monster movies shows…

(1958)
Of all the giant atomic mutants of the 1950s, none had the appeal of Nancy Archer. Allison Hayes plays a wealthy boozehound whose irradiated encounter with a spaceship causes her to grow to fifty feet tall! Rather than wreaking havoc on her entire town (as 1957’s Amazing Colossal Man did), Nancy uses her new stature to get revenge on her cheating hubby and his money-grubbin’ mistress (Yvette Vickers)!! Despite laughably bad effects, the image of the voluptuous sheet-wrapped giantess indelibly embedded itself into the psyche of many moviegoers of the 1950s (a 1993 remake

(1994)
Few actors personify salaciousness better than Jack Nicholson, and in Mike Nichols’ “Wolf,” we get the full Jack, so to speak. Jack plays Will Randall, a middle aged editor replaced by his smug protégée (James Spader), who also happens to be having an affair with Will’s wife! However, a surreptitious bite from a wolf endows Will with renewed vigor and a, uh, animalistic need to protect his territory. He also gets to have sex with Michelle Pfeiffer. Clips of Nicholson reveling in his newfound heightened vitality are so convincing they should be used to market Viagra.

(1995)
Opponents of stem cell research could use this sci-fi thriller about the product of spliced alien-human DNA as speculative propaganda. Natasha Henstridge plays Sil, a female hybrid who ages to full adulthood in a matter of weeks. Armed with a supermodel’s body, alien superpowers of regeneration and mutation, a childlike innocence and a built-in need to mate and procreate, Sil’s a date to die for. Especially if she wants to French kiss. Enter this B-movie Alien-Girl-Gone-Wild with low expectations and you’ll get some cheesy thrills.

(1956)
Evil Dr. Carlo Lombardi hypnotizes his female assistant Andrea into calling forth her prehistoric reptilian alter ego from the sea to do his bidding, killing people whose death he’s predicted! But when Andrea begins to fall in love with the detective investigating the doings of the dirty doctor, the She-Creature finds a conscience and refuses to follow orders! A truly ludicrous 50s horror flick, it’s elevated by the presence of pin-up Marla English as Andrea and a killer monster design for the titular (pun) creature, perhaps the only movie monster of the 50s in need of a bra!

(Beauty and the Beast) (1946)
Okay, referring to the traditional French fairy tale as a “monster movie” is kinda like calling “Transformers” and industrial film; It’s a stretch. But director Jean Cocteau’s sensually surrealist 1946 version of the woman-comes-to-love-monster tale is laced with more sexual metaphors than a Georgia O’Keefe painting. Jean Marais plays the charming Beast to Josette Day’s Belle in a movie better suited for the parents of the kiddie fans of the Disney version.

have in common is the monkey-love felt for the comely blonde offered up for sacrifice by the natives of Skull Island. However, while both Kongs ‘33 and ‘76 exhibited some chauvinistic tendencies (attempting to undress their respective ladies, played by Faye Wray and Jessica Lange), Kong ’05 was a more respectful suitor to Naomi Watts, preferring the simple pleasures of ice skating in the park to wet gown contests. Still, we’re pretty sure that all three women were glad that Kong didn’t try to go all the way. 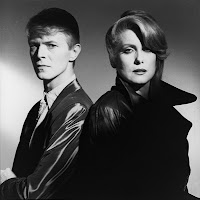 ,” vampires have always been inherently sexy. But the super-stylish Goth bloodsuckers of “the Hunger” are so carnal that bloodlust takes a backseat to the more traditional kind. Catherine Deneuve plays Miriam, a vampire thousands of years old whose lovers, once infected, sadly only retain their youth for another few centuries. David Bowie plays her soon-to-be-aging partner, and when an alluring doctor (Susan Sarandon) fails to cure him, she becomes Miriam’s latest prey. Still, the most monstrous thing about this movie is its terrifyingly ugly ‘80s fashions! 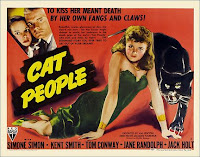 )
In 1942’s “Cat People” is a cautionary film-noir about the perils of sublimating sexuality. Simone Simon plays Irena, a Serbian woman who believes that she’s descended from an ancient Egyptian race who transform into panthers when sexually aroused. This makes for a frustrating marriage to her red-blooded American hubby, who inevitably finds release in the arms of another woman, which leads to a literal catfight. In the 1982 remake, Nastassja Kinski plays Irena, this time being pursued by her cat-brother (the always-creepy Malcolm McDowell) to engage in an incestuous relationship, as two cat-people can’t bring out the beast in each other. Impeccable casting raises the temperature on this more overt take on the original. 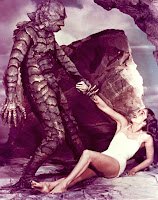 2) Creature from the Black Lagoon

(1954)
Say what you will about the murderous gill man from the Amazon… he has great taste in women. The stunning Julie Adams plays Kay Lawrence, who accompanies boyfriend ichthyologist David Reed and his research team as they search South America for the missing link between sea and land creatures. And the missing link becomes smitten. Scenes of the Gill Man watching Kay swim underwater and reaching out to touch her feet as she treads water have an oddly affecting beauty to them, and partly because of the cloddish ‘50s mentality of the men on the expedition, we almost wish Kay would end up with the Gill Man. 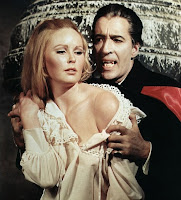 (pick one)
We all know how much women are attracted to bad boys, and who’s badder than the prince of darkness? In the 76 years since Tod Browning’s 1931 “Dracula

,” the first official movie adaptation of Bram Stoker’s 1897 novel, over 150 films about the seductive Transylvanian vampire have been produced. Which Dracula is the sexiest is subjective, of course. Some may prefer the exotic sophistication of ‘31’s Bela Lugosi, while others yield to the creepy gothic charm of ‘92’s Gary Oldman

” is to your liking. Regardless, it’s doubtful there will ever be a movie monster with as much sex appeal as the Count.

Heck, even the Count who lives on Sesame Street