When a pop culture franchise comes to a close, its creators face a conundrum: Tie up the story with a nice little bow to meet the fans’ expectations or do something unexpected. Most books, movies and TV shows go the former route (Aw, Ross and Rachel got back together!), but the road less taken can yield bigger drama. Right now, Harry Potter fans are nervous as to the fate of the young wizard when J.K. Rowling’s final book, “Harry Potter and the Deathly Hallows

” comes out on July 21. To help distract you nervous muggles, we thought we’d take a look at some other controversial closings.

” (1999) ends with the cannibalistic serial killer and FBI Agent Clarice Starling becoming a couple and jetting off to Argentina together, a highly contentious conclusion that was rumored to be one reason why Jodie Foster refused to reprise the “Silence of the Lambs

” role on film. As it turned out, replacement Clarice, Julianne Moore didn’t have to bat eyes at Anthony Hopkins, as the 2001 film adaptation

” setology had a curious conclusion that put off some fans. After taking gunslinger Roland Deschain through seven books on the quest for the titular Tower, fabled to be the nexus of every universe, King finally gets there, only to tell the reader to stop reading and consider the story finished. Those who disobey the writer’s wishes discover that Roland goes through a door with his name on it and ends up back at the beginning of the first book, and the cycle continues.

Movie franchises are more likely to just fade away due to diminishing returns than end with a bang. Studios are hesitant to kill a cow while it’s still giving milk, so to speak. So terrorists will continue to have awful aim when shooting automatic weapons at John McClane, Arkham Asylum escapees will always be captured by the Batman, Starfleet will always build a new Enterpirse, et al, ad infinitum. When film series are designed to be finite, it’s usually because they’re based on some external property such as “the Lord of the Rings

” became an accidental franchise in the ‘60s when an ostensible cameo by Peter Sellers as Inspector Clouseau proved so popular that more movies were built around him. But a problem arose when it came time to make 1982’s “Trail of the Pink Panther

:” Sellers had died in 1980. Undeterred, the filmmakers (taking a page from the Ed Wood school of filmmaking) used deleted scenes and other footage of Sellers from old PP films to create a movie that (shock!) wasn’t that good. But they weren’t done yet! The next year “Curse of the Pink Panther

” centered around a bumbling American detective attempting to locate the “missing” Clouseau, essentially trampling over Sellers’ grave. Critics cried foul and the series limped to an end, at least for a while. 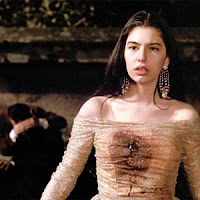 ” was a scandalous closer to the Michael Corleone saga not so much for its plot (about the Don trying in vain to go fully legitimate and paying the ultimate price for his sins) but for its casting. When Winona Ryder dropped out of playing Mary Corleone, director Francis Ford Coppola replaced her with his daughter, Sofia, a young girl with no acting experience (or, many argued, talent). Cries of nepotism had a vindictive, ultimately pointless tone that overshadowed anything else about the movie (which isn’t that bad).

” trilogy controversial, unless muddled incomprehensibility begets controversy. 2003’s “The Matrix Revolutions” failed to resolve many of the issues (both of logic and philosophy) raised by the first two films, but it’s safe to say that more fans were peeved at the deaths of Trinity (Carrie-Anne Moss) and Neo (Keanu Reeves), even if their sacrifices were two of the only things in that film that made sense.

Of course, no medium lends itself to The Big Finale better than television. Successful TV series have the luxury of being able to develop characters and a narrative thread over years and hundreds of hours. This can create a relationship with the audience that, when it comes to an end, can feel like a real-life breakup.

”). But not every show follows convention. 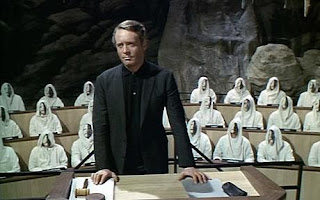 Maybe the first controversial TV finale was of the 1967-68 British sci-fi series, “The Prisoner

.” Patrick McGoohan plays “Number Six,” a former government agent being held for “information” by unidentified captors (Numbers Two and One) in a high-tech “Village.” For 17 episodes, Number Six resisted the brainwashing efforts of his captors while trying to discover their identity and escape the village. The show’s allegorical surrealism came to a head in the final episode, in which Number One is revealed to be Number Six himself wearing a gorilla mask and then there are some missiles fired and everyone flees the Village and Number Six ends up back in his apartment… oh, forget it. The confusing anti-climax left the BBC inundated with frustrated phone calls from viewers and writer / star McGoohan reportedly had to go into hiding.

After six seasons of medical and personal drama, “St. Elsewhere

” threw fans for a loop when the 1988 finale revealed the entire series to be the figment of an autistic boy’s imagination (as opposed to being “real?”). Far better received was the surprising 1990 conclusion of Bob Newhart’s second sitcom, “Newhart

,” in which the wacky adventures of the Vermont innkeeper turned out to be nothing but a dream of the lead character from “The Bob Newhart Show

” was groundbreaking in terms of style, pacing, characterization and storytelling, so its stunning 1991 conclusion was no surprise to the faithful. After being forced by ABC to resolve the murder of Laura Palmer (a macguffin to begin with), the show meandered in its second season, struggling to come up with reasons for FBI agent Dale Cooper (Kyle McLaughlin) to linger in the quirky Pacific Northwest town. A cat and mouse game with his now-deranged former partner culminates with a final shot of Cooper being possessed by the demon Killer Bob, the hero turned into a villain, the story unresolved.

” ended its 9 years with a long monologue from its star stating that the final 1997 season (in which the working class Conners won the lottery and became wealthy) was in fact a fictional story written by her character. The self-congratulatory, indulgent twist was met with a mere shrug by viewers who, by that point, had pretty much stopped caring.

Apathy was NOT the case the following year when Jerry Seinfeld

used the final episode of his eponymous sitcom to remind people that, despite the show’s wild success, its central characters were not nice people. The finale found Jerry, George, Kramer and Elaine on trial for violating a Good Samaritan Law after idly watching a man being carjacked in a small New England town. Previous shows’ victims of the foursome’s sometimes destructive narcissism testified for the prosecution, ending in conviction and jail. Critics and fans howled, but at least the show remained true to its mantra of “no hugging, no learning!” 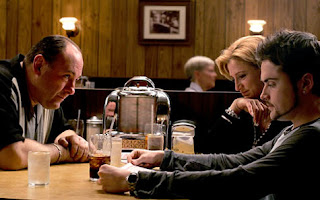 And then, of course, there’s perhaps the most controversial TV finale of all time, last month’s climax of “The Sopranos

.” Few things this side of politics and religion have spawned such heated debate. Our take on the matter is that the abrupt 11 seconds of black followed by a lack of music over the end credits does signify that someone got whacked. Only it wasn’t Tony Soprano… it was you. And me. All of us, as in, the audience. We were so distracted by trying to figure out the whos and whys in that final scene at Weston’s that, like Bobby Bacala predicted, we never saw it coming. “The Sopranos” turned the tables on expectations by killing off the viewer rather than its lead character. And really, anyone who wanted tidy closure from “The Sopranos” wasn’t truly paying attention to the show.

So, whither Harry Potter? Graduation? Victory over Valdemort? Death? Regardless of how popular or unpopular the end of the story is, the inevitable movie version will likely remain faithful to J.K. Rowling’s vision.