Thou shalt read this list of ten memorable movie versions of GOD. 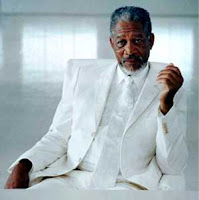 Morgan Freeman reprises the role of God in “Evan Almighty

.” Which got us thinking about other cinematic Almighties. We shalt now command thee to read our list of the ten most memorable depictions of God in the Movies!

(1989)
After traipsing all over the galaxy seeking out new life and new civilizations, where is there left to go? To Sha-ka-Ri, to find God! In the much-maligned William Shatner-directed film, Spock’s half-brother Sybok hijacks the USS Enterprise to breach the Great Barrier, one of the last uncharted regions of space, because he’s had visions of a powerful entity within. Sure enough, the glowing entity (George Murdock) declares himself an angry God, one who wants to use the Enterprise to get off of Sha-Ka-Ri and through the Great Barrier, which causes a skeptical Captain Kirk to ask, “Excuse me… what does GOD need with a starship?” Turns out this is one false God, but not as fake as a rubber-suited Gorn. 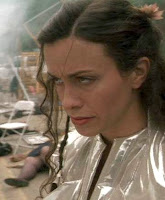 (after Holly Hunter and Emma Thompson both passed). She possesses super powers (of course), but singing is not one of them. The film is chock full of Smith’s patented faux-clever (and utterly unbelievable) dialogue and its presentation of ideas is loud and shocking enough to fool many people into thinking the movie contains substance. We remain unconvinced.

(2001)
It only makes sense that a Psychotronic indie film is going to try to pull of a shocking portrayal of the Almighty. In the Troma production “Citizen Toxie: The Toxic Avenger IV,” God is played by frequent Howard Stern guest, the now-departed Hank, the Angry Drunken Dwarf. Naturally, this is an angry, lecherous and rude God, one who fumes that the Pope doesn’t really know him at all and has only allowed 16 people into Heaven. And 180 degrees away…

(1956)
Okay, this most reverent of depictions actually doesn’t SHOW God (except as a pillar of flame), but his booming voice and shows of power (burning bushes, playing with the weather, writing on mountainsides with fire) set the template for most movie Gods. The voice is provided by Donald Hayne, whose only other film role was as a Catholic Priest in 1963’s “The Cardinal.” Hmm, talk about typecasting problems!

(1991)
Blake Edwards’ tale of a male chauvinist who dies and comes back to life as a woman to redeem his ways and earn entrance into Heaven features one of the more interesting manifestations of God in a movie. God, or “the Higher Authorities” is presented in voice only, but as two voices, one male and one female, speaking simultaneously. Which brings up the question, what does, uh He/She look like? Does God have two heads? Or look like John Travolta in the upcoming “Hairspray” remake? The mind boggles. 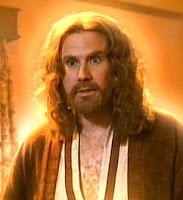 (1999)
In one of the very few Saturday Night Live spin-off movies that’s not wretched, Will Ferrell plays Mary Catherine Gallagher’s (Molly Shannon) idea of God, a visual cross between Jesus, her Dad and high school heartthrob Sky Corrigan. This super-mellow God enjoys his celebrity status, pointing out that Norman Greenbaum’s “Spirit in the Sky

” is about him and reveling in sayings like “Oh my Me!”

(1981)
In Terry Gilliam’s fantasy, six dwarves whose job is keeping the universe repaired decide to steal a map of time portals from “the Supreme Being” for whom they work. The dwarves are using the map to make themselves rich, but “The Source of All Evil” wants it so he can remake the universe in his own image. Sir Ralph Richardson plays “The Supreme Being” as a no-BS gentleman in a pinstripe suit, which is actually kind of unnerving. I mean, not only is it not the usual robe and sandals look we’re used to, it’s not even business casual!

(2003)
There are a few reasons we’re including our column-launching example here. One is that there haven’t been too many literal depictions of God in film, so we’re stretching to get ten. But the bigger reason is that Morgan Freeman makes a really cool God. A friend of the workin’ man, a likeable joe with a sense of humor, but one who isn’t likely to suffer fools gladly. The only problem with this God is he seems to care a little too much about what people think of him and his job performance. Would God really have such a thin skin? 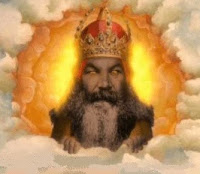 2) Monty Python and the Holy Grail

(1975)
King Arthur and his Knights of the Round Table fumble about the British countryside aimlessly until God appears and gives them a task: They shall seek the Holy Grail. This God, an animated photo of 19th century cricket player W.G. Grace voiced by Graham Chapman, is a bit testy (“Of COURSE it’s a good idea!”) and really tired of everybody’s sycophantic behavior, not to mention those miserably depressing psalms. It’s worth noting that the Lord as a character has appeared in every Monty Python film.

(1977)
While debates rage as to what God would look like, there’s one thing on which everyone can agree: He (or She or It or Whatever) is really, really old. So the casting of octogenarian showbiz legend George Burns in 1977’s “Oh, God!” makes perfect sense. God appears to grocery store manager Jerry Landers (John Denver) and asks him to be his modern day messenger. This gentle, inoffensive little movie ends in a courtroom variation on “Miracle on 34th Street

” which ostensibly proves God’s existence, but we still have to ask: Why does God need a hairpiece? Two sequels followed, and Ellen DeGeneres is slated to take on the role in a 2008 remake (oh, we can hear the cries of foul already!).