As Harry Potter fans get all muggly over the release of the latest film, “Harry Potter and the Order of the Phoenix

” as well as the final J.K. Rowling book, “Harry Potter and the Deathly Hallows

,” we ponder the legacy of cinematic practitioners of the dark arts. Join us as we conjure up a countdown of our favorite movie wizards and sorcerers outside of Hogwarts! 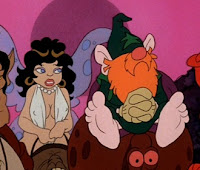 ” (1977)
In Ralph Bakshi’s animated post-apocalyptic fantasy, Bob Holt provides the voice of Avatar, a portly, kind hippie wizard who must do battle with his evil twin, Blackwolf. a Nazi-worshiping wizard bent on controlling the world. The movie purports to deal with issues such as warfare, propaganda and technology, but it’s also, like, really a trip, man.

9) The Great and Powerful “Wizard of Oz

” (1939)
True, “The Wizard of Oz” is one of the most beloved films of all time, but it’s so far down on our list for the simple reason that Oz turns out to be not so great and powerful after all, but rather a timid little man hiding behind a curtain. What keeps him on the list is the sheer terror that almost every kid experiences watching the movie for the first time, when that huge, looming green face yells at Dorothy and her motley crew for daring to disturb him! 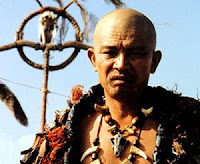 8) Akiro in “Conan the Destroyer

,” veteran Japanese character actor Mako is little more than comic relief as Akiro, the wizard to Arnold Schwarzenegger’s sword-wielding Cimmerian. The sequel, while not as popular as the original, gives Mako more to do, as magic and monsters play a much bigger part in the tamer, PG-rated follow-up. Still, we wish Akiro would’ve conjured some kind of diction-improving spell to make Arnold’s dialogue (such as it is) more comprehensible.

7) Miracle Max in “The Princess Bride

” (1987)
Billy Crystal’s Jewish curmudgeon character was never funnier than in the bizarre context of a fairy tale. As Miracle Max, the former wizard to the King who was fired by the evil Prince Humperdinck (Humperdinck! Humperdinck!), Crystal revives the “mostly-dead” Westley (Cary Elwes) more for spite than the reduced $65 fee. Too much of Crystal’s mugging can make any film tiring, so it’s nice that Miracle Max was a mere cameo in this movie.

” (1940)
In “The Sorcerer’s Apprentice” segment of Disney’s classic collection of classical music cartoons, Mickey Mouse “plays” the underling to a powerful wizard (unnamed in the film, but nicknamed Yen Sid… read it backwards). The lazy mouse uses Yen Sid’s magic hat to bring a broomstick to life in order to fulfill his water-carrying chores, but things get out of hand quickly. Maybe Yen Sid would’ve been better off outsourcing his chores to Korea!

” (1981)
Sir Ralph Richardson plays Ulrich, the last remaining wizard, who is called upon to help defeat the last dragon, Vermithrax Pejorative (somewhere there’s gotta be a metal band with this name), who is holding the kingdom of Urland hostage. Sadly, Ulrich dies during a medieval pissing contest, and his untried apprentice (not Mickey Mouse) has to take his place. But as if often the case with wizards, death is not all that it seems, and Ulrich ultimately manages to save the day, even if the stupid king takes the credit. 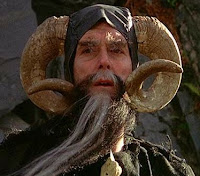 4) Tim the Enchanter in “Monty Python and the Holy Grail

” (1974)
In scene 20 of the Pythons’ classic comedy, King Arthur and his knights come upon a sorcerer with ram’s horns on his head conjuring fireballs. Suitably impressed, Arthur asks the enchanter’s name. “There are some who call me… Tim!” If only the knights would’ve heeded Tim’s warnings as to the vicious, cruel nasty rabbit with long, pointed teeth that guards the mouth of the Cave of Caerbannog!

” (1981)
The most famous of all Wizards has been brought to life in numerous filmed tales of Camelot, but never so memorably as in John Boorman’s lavish, ambitious “Excalibur.” Nicol Williamson plays King Arthur’s sorcerer with a slightly foppish, yet regal detachment. He knows he’s the most powerful, and suffers the fools of Camelot with amusement. The film is ultimately overreaching, but it’s well worth checking out for this saucy sorcerer. 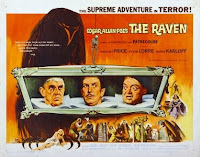 2) The sorcerers of “The Raven

” (1963)
Roger Corman’s “The Raven” has little to do with the Poe poem from which it takes its name, instead telling the tale of three 15th century wizards. Dr. Craven (Vincent Price) is mourning his dead wife Lenore to a smart-aleck raven that turns out to be a transformed Dr. Bedlo (Peter Lorre), a magician who was turned into a bird by the evil Dr. Scarabus (Boris Karloff). When Craven discovers that Lenore is s till alive, and shacking up with Scarabus, a battle of the dark arts ensues that’s as fun and funny as it cheezy. With Jack Nicholson as Bedlo’s son Rexford, this comedy has the feel of a horror legends “Ocean’s Eleven.”

1) Gandalf in “the Lord of the Rings

” trilogy (2001-2003)
Has there ever been a cooler wizard than Gandalf the Grey / White, as so perfectly personified by Ian McKellen in Peter Jackson’s “Lord of the Rings” trilogy? Whether partying with Hobbits or doing battle alongside the heroes of Middle Earth, Gandalf maintains an elegant dignity and friendly charm that belies his enormous power. McKellen’s performance in “The Fellowship of the Ring” earned him an Academy Award nomination for Best Supporting Actor, making the only time a non-special-effects wizard was up for an Oscar.