One of science fiction’s most powerful storytelling techniques is the allegory. By placing contemporary issues in a fantastic context, filmmakers can tackle issues such as racism, sexism, any-ism in a metaphorical manner that’s often more entertaining and palatable to an audience than more direct proselytizing (Practically every episode of the original “Star Trek

” TV show was an allegory to some ‘60s controversy).

Opening this week, “The Invasion

” is the latest film version of a much-dissected sci-fi classic, the story of paranoia that comes when you start to suspect that the people around you aren’t what they appear to be… It’s a tale that’s been terrifying audiences for more than half a century, since author Jack Finney first serialized “The Body Snatchers

were in many ways the quintessential American decade, as the nation basked in postwar pride and prosperity. It was the iconic age of Elvis Presley

. It seemed like the only thing to fear was the ongoing Cold War between the US and the Soviet Union. 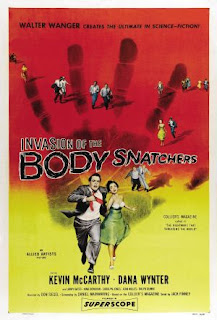 Into this era came “Invasion of the Body Snatchers

.” The 1956 movie stars the ironically-named Kevin McCarthy as Miles Bennell, a California doctor who discovers that people in his town are being replaced by exact duplicates grown from giant pods. The “pod people” are identifiable by their utter lack of emotion, and they turn out to be aliens planning to replace the entire human race. Bennell and his former girlfriend Becky (Dana Wynter) try to convince the authorities of their fantastic tale while battling to avoid being taken themselves, but nobody wants to listen. The film was originally to bleakly conclude with a beaten Bennell standing in the middle of a highway screaming “You’re next!!,” but the studio demanded an epilogue that bode better for our continued existence.

The movie has been interpreted as having three distinct allegorical meanings, two relating directly to the Cold War. Some view it as a cautionary tale on the threat of Communism, showing how the Godless, classless system of government would strip away American individuality. Others see it as a commentary on the hysteria ABOUT Communism fostered mainly by witch-hunting Wisconsin Senator Joseph McCarthy. And others like to think that the film is an indictment of the American tendency towards blind, unquestioning conformity. Amazingly, to this date, if the filmmakers had a specific agenda, they still aren’t telling, leaving it open to the different interpretations. 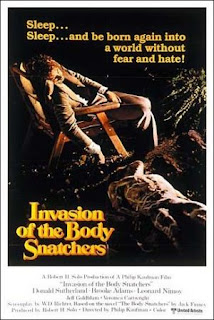 22 years later, it was time for another visit from the pods. Philip Kaufman directed the 1978 “Invasion of the Body Snatchers

,” with Donald Sutherland starring as Matthew Bennell, now a health inspector in San Francisco who discovers the existence of the emotion-free pod peeps. Times had changed since the “Leave it to Beaver

” ‘50s, and in the post-Vietnam, post-Watergate era, the public was far more mistrusting of the government and authority, amping up the paranoia quotient in this version. When Bennell contacts Washington DC for help, the person he reaches knows his name before he gives it, causing him to wonder if the aliens have already infiltrated our government.

The movie also takes a jab at the psychoanalysis boom of the ‘70s (and the “personal transformation” EST movement specifically), with Leonard Nimoy playing a pop psychologist who tries to tell Brooke Adams that her suspicions about her pod-boyfriend are actually a product of her own troubled psyche. In addition, with its big city setting, the movie felt like a commentary on the ironic loss of identity one can feel when immersed in such a concentrated, yet detached mass of humanity. And this time, the studio let the filmmakers have their unhappy ending.

The third visit from the pod people, 1993’s “Body Snatchers

” transposes the story to a military base where Marti Malone (Gabrielle Anwar), the teenage daughter of an EPA agent discovers that soldiers are being replaced with the soulless automatons. What follows is less of an allegorical thriller than a more standard blood-n-guts horror film. In addition, this version (directed by Abel Ferrara) loses some of its power by placing the film in a context to which the average filmgoer can’t relate. Besides, isn’t stiff, unquestioning conformity the norm for the military? Or is that the point?

Still, if only out of habit, some sought hidden meaning. The interpretations this time ran the gamut from a condemnation of President George Bush’s (the elder) post-Cold War New World Order to an allegory about fear of AIDS (as critic Roger Ebert famously interpreted).

The powerful concept of the Body Snatchers has seeped into our public consciousness. Other movies such as “The Stepford Wives

” (1998) are based upon the idea of mindless doppelgangers and “pod people” has entered the lexicon as a euphemism for those who refuse to think for themselves.

ORIGINALLY POSTED in REWIND on MTV.COM, August 2007
Posted by Pops Gustav at 9:21 PM